I spent 50 quid on Fast & Furious Crossroads last Friday night. Namco slipped the game out onto store shelves before the weekend without sending out review copies (now, of course, I understand why) and that is why I am now 50 quid and millions of brain cells poorer. For this... this is the worst major release of the year so far.

Licensed games based on great action movies (and their IPs in general) are very rarely good. In fact, they are rarely anything other than downright horrible, and although there are memorable exceptions such as The Chronicles of Riddick: Escape From Butcher Bay, GoldenEye 007, X-Men Origins: Wolverine, and Mad Max, this is not a title that should in any way, shape or form be described in that manner. On the contrary, Crossroads is just as unimaginative, sloppy, pointless, ugly and lacking in variety as some of the worst licensed games ever made. Let me tell you how it all begins.

Emil (Peter Stormare) is an evil old man. Mean. Old. Evil. Very mean. Very Evil. He combs his hair with butter, his mouth is animated by someone who has evidently never seen a computer before, and his skin resembles light brown fudge. His vicious, international criminal syndicate terrifies police forces across the globe and the only one who can really hit him hard and overthrow his vicious gang of hired goons is a former mechanic in a vest (white and tight, of course) and his bad-ass accomplices.

In Fast & Furious Crossroads, the player takes on the roles of Vienna Cole and Cam Stone. During the course of the campaign, you are passed between these two playable protagonists while they are teamed both with and against Dom Toretto and his faithful car gang on the way to their final goal: taking down the very, very evil Emil (don't forget he's very mean, very evil). The story is ridiculously thin, mindless, and badly written (you could argue, just like several of the films upon which this is based) and newcomers Vienna and Cam are such poorly written characters that their cutscenes quickly become painful to watch, so much so that they feel like a punishment handed to you for finishing each mission.

In terms of gameplay, Crossroads revolves around car-based action, with hyper linear missions where you as a driver must either crash into an enemy car (or several enemy cars) like in Chase HQ or Burnout, or perform something a little more daring such as a spectacular jump, dragging around a giant safe, or shooting wires into an aircraft that is about to take off and then slowing down its takeoff and keeping it on the ground. The action set-pieces are theoretically suitable for the cinematic universe and everything here is about attempting spectacular, incredible manoeuvres with your car in full focus. Therefore, it's too bad that the gameplay, car physics, track design, artificial intelligence, graphics, and collision detection are 100% horrible.

The cars, in particular, feel like big, heavy unresponsive bricks. On top of that, the missions are ridiculously stupid and it's all about jamming the throttle, driving straight ahead as fast as you can, and witnessing cars explode in front of you as soon as they are touched. There are assignments here that in the description require you to follow behind an enemy car, while in reality, they don't require anything more than you just mashing the gas and staring at the screen. There is no artificial intelligence to test one's skills here, just lousy physics and invisible walls.

Visually, it's also the ugliest big-budget game of the year so far, and by a fairly wide margin. In fact, Fast & Furious Crossroads looks like a four-year-old mobile game (and not a good one at that), and I encountered game-breaking bugs that either forced my car into a corner where I was stuck or shut down the entire game in the middle of an ongoing mission. The only positive thing I can think of regarding the game is the fact that Vin Diesel and co. have lent their voices to the story itself; I definitely want to praise that as it feels like a luxurious and lavish addition to the production, even if the script they're reading is lousy and the cutscenes are worse.

Being a studio that in recent years has given us great games like Project Cars and Project Cars 2, it feels really tragic that Slightly Mad has sunk so incomprehensibly low. There is no doubt in my mind that Fast & Furious Crossroads is the worst game of the year so far. Don't touch it, not even with a dipstick.

"There is no doubt in my mind that Fast & Furious Crossroads is the worst game of the year so far. Don't touch it, not even with a dipstick."

Today we're at a Crossroads with Fast & Furious on GR Live

We're getting behind the wheel of Slightly Mad's new movie-themed action-racer.

Slightly Mad Studios' game based on the explosive action franchise Fast & Furious is landing on PC, PlayStation 4 and Xbox One in August.

Fast & Furious icons Michelle Rodriguez and Vin Diesel were on stage for the announcement of racing game Fast & Furious Crossroads. 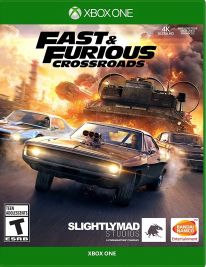