The highly successful space MMO Eve Online has been on the market for about five years, but after launching initially launching in retail shops it has been off store shelves for many years. But in co-operation with Atari Icelandic developers CCP Games are bringing Eve Online back to retailers next month. The pack will include 60 days of free play time that can be divided and sold in-game to other players for in-game currency.

Four bullets of content straight from the press release:

Exclusive Career Guide: Accessed via the website to allow for dynamic updates, the guide includes insider tips and tricks.

VIP Pass: Use this card to invite a friend to try the game for 21 days. When that friend becomes an EVE Online subscriber, you will get an additional 30 days of free game time.

Exclusive In-Game Ship: An exclusive new ship, the Interbus Shuttle, will allow players to fly in style with an increased capacity cargo hold to ferry those extra crucial items at high speeds. 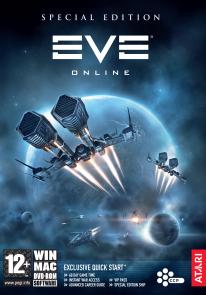