In the case of Yoshi's Woolly World, we've the gentle platforming of the green dinosaur's past work, the unique stylings of Kirby's Epic Yarn and a pinch of multiplayer mechanics from New Super Mario Bros. The result is the most promising platformer starring Yoshi since Super Mario World 2: Yoshi's Island (and will hopefully wash away the foul taste of the recent 3DS outing New Island). This is looking to be one of the better future offerings on Wii U.

Most striking without question is the presentation. Yoshi's world is one realised in the form of colourful wool and fabrics, much like Kirby back in the Wii days. While the pink cotton ball was characterised by its inner emptiness, the dino is a complicated crocheted and stuffed animal in a world with real 3D objects and visual depth. The mixture of different materials makes the places you visit on your platforming journey look varied, and in HD the whole thing looks so beautiful that it's hard not to fall in love.

Yoshi still eats his foes using his long tongue, but instead of popping out the other end as an egg, Shy Guys are turned into balls of yarn. Still perfect for shooting distant objects or dangerous enemies, though this time if you hit, say, a Piranha Plant, the yarn will explode on impact and wrap around the biter's mouth. Hit a platform outline and the yarn will wrap around forming a solid surface to run on. Elsewhere, gobbling other foes will let you spit out a cloud-like platform in the direction you fire. The new visual style goes hand-in-hand with the game's mechanics and makes many familiar tropes of the series feel new.

It's great fun playing two player co-op. Here developer Good Feel offers something that's not just a gimmick with limited control for the second player - the two on-screen Yoshis have equal rights. As it's only two player rather than four, it's not quite the fully-fuelled chaos of New Super Mario Bros. U, but it doesn't lessen the enjoyment. While you can fight one another, progress comes down to helping each other along the way (you can even swallow one another, and fire the other player as a projectile).

At it's core, Yoshi's Woolly World is actually surprisingly conservative. The nature of the puzzles and the basic game mechanics feel very familiar, and it's really only the game's visual style that makes somewhat new. But this still feels and looks to be a unique and challenging platform title, the right balancing of Yoshi's talents in 2D with a gorgeous HD paint job. After a rather mixed outing on the Nintendo 3DS, the green dino's on the right path again. Roll on its release in 2015.

A must in every serious Amiibo collection.

It's as cute as it gets.

There's also a mellow mode, if you want to enjoy the game without any stress. 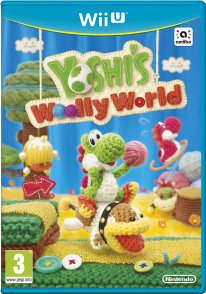