One of the games announced during Sony's E3 conference was Ready at Dawn's The Order: 1886. We talked with studio co-founder Ru Weerasuriya about the new IP and found out more about what we can expect when it launched on Playstation 4.

The Ready at Dawn co-founder then elaborated on the game, explaining more about how it would play: "The gameplay experience in itself, you saw some of the shooting mechanics... in the cinematic [trailer] itself you saw some shooting, there will definitely be that, but we're building a lot more, and we're building a lot more moment-to-moment mechanics that you're going to find, you know once we finally reveal more gameplay."

Watch the rest of the GRTV interview for more on how the company hopes to expand on the new IP, their explanation for the futuristic technology set to feature in their vision of neo-Victorian London, and how the game ended up on the stage during Sony's conference at E3.

REVIEW. Written by Gillen McAllister on the 21st of February 2015 at 11

"Victorian villainy rubs shoulders with religious relics. It's Indiana Jones meets Penny Dreadful - and what's not to love about a pitch like that?"

Ready at Dawn has joined the Oculus Studios family.

New CEO confirms tech is in place where games can be delivered on PC, PS4, Xbox One.

Take your own steampunk snaps.

The Order: 1886 gets bizarre censorship in Japan

No nudity, no nipples.

PS4 exclusive takes top spot ahead of Call of Duty and Evolve. 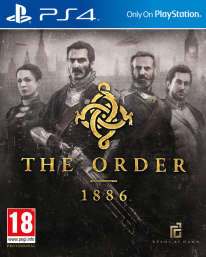