Since starting out as a Microsoft owned property Dungeon Siege publishing rights later landed at Take Two, who published a PSP title, but now it seems the Japanese publisher who recently published Gas Powered Games' Supreme Commander 2 will be handling the franchise from now on.

Dungeon Siege 3 is in development for PC, PS3 and Xbox 360 and will be one of Square Enix' focus titles at E3.

Chris Taylor had the following to add to the press release:

"It has been a great pleasure to collaborate with Obsidian. They are a very talented developer who really knows what it takes to build a deep and engaging RPG experience, and I can't think of a better group to continue the Dungeon Siege series".

Here are a few bullet points from the press release:

* For the first time, play DUNGEON SIEGE on high-def consoles

* Recruit companions with unique personalities, abilities and views on the world around them

* Players will have weighty decisions to make that will impact their alliances, enemies and the culmination of the story

"As a whole Dungeon Siege III offers some grand ideas, and the illusion of fantasy epic, but falls just before greatness due to its shortcomings."

Lay siege to a couple of dungeons

Comes to Xbox Live next week

"Some things are clear: don't go alone. But make sure your backup is someone who's less Lone Ranger, more Tango & Cash. Always pick Anjali, and avoid the Determined Pants."

New trailer for the curious 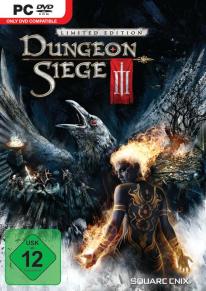