The original Driveclub arrived two years ago, launching later than originally intended, and although it was very buggy at release, over time it developed into a really good action racer. The frustrated early adopters, as an apology for the initial tardiness, were comforted with free DLC, new game modes, and a Season Pass that allowed access to some great new tracks. Fast forward to today and the VR version of the same racer has landed in time for the launch of PSVR, but it has its own problems.

Driveclub VR starts with a decent selection of well-known content, but this is the first time we're experiencing it from a completely new perspective, because the VR headset puts us right into the race with high-priced sports cars driving at breakneck speeds all around us. It's here, however, that the first problem of significance comes into play: motion sickness. It's certainly worth mentioning, because the disconnect between racing at high speed through virtual landscapes while the body is sitting still doesn't always make for a good combination.

Fortunately, we're not that sensitive, and at least you can train yourself a little to suffer less with the sickness related to virtual reality. The motto for doing this: don't push it too far. Take regular breaks at the first signs of trouble, but also bear in mind that there are also positive aspects to this imagined movement, and if the stomach twists when you race up a steep hill, well, that can have its own charm.

To give VR its due, the feeling of sitting right there in the driver's seat is absolutely fantastic, and it's actually here that you can do a lot to prevent potential motion sickness. The virtual seat should be raised fully, and the brightness of the menu should be increased by about one third. Also, from the three possible perspectives you should definitely choose the one in the car. In connection with this, it's extremely beneficial to use a steering wheel and pedals to complete the experience. This seems to "ground" the body while also making for a fun arcade experience that anyone can keep up with.

Sadly the graphics also remind us of some old arcade offerings, and you can see a lot of pixelated edges. Driveclub had to be upped from its original 30 frames per second to 90 in order to function as Driveclub VR, and for this the graphics had to be scaled down somewhat. Since the edge smoothing is hardly used, undoubtedly for performance reasons, the low resolution of PSVR is all the more noticeable. In the menus they have chosen a very small font, where you can really count the individual pixels, so even the readability suffers.

On the track, however, these disadvantages don't matter too much thanks to the headtracking and the immersion thus offered; it's simply a dream for petrolheads. It's only natural that you look obliquely into tight corners, use the functioning rear and wing mirrors, and stretch your head to be able to see a bit earlier when hitting hills, and all of these things add to the immersion and make you feel like you're actually there.

The game offers almost everything you know and expect from Driveclub. Good driving is rewarded with points that boost your career and unlock new cars and paint jobs. From a collection of events - such as races, time trials, and drifting competitions - you can collect medals until the next block of events is unlocked, and the whole thing can also be done in a club in order to unlock even more cars. Friends and club members can be challenged with their own achievements and of course take part in online races. Something that's a pity for Driveclub veterans: no data carries over from the non-VR original.

The online features work this time, right from the start too, but we have to say that there are still only a few players on the road at the moment. That should change soon, because Driveclub VR is in our opinion a decent racer, and it offers a unique experience for console speedsters. With the PlayStation VR demo you can also test how your body reacts, and then you might even think about buying a steering wheel (something like the Logitech G29 Driving Force).

There are still a few features passed down from Driveclub that we dislike. One such issue is that the AI drivers always group together in very dense packs, which seems quite unrealistic. Even worse is the audio, especially in the vehicle interior. The fact that opposition engines roar louder than your own seems quite strange too. In some car models, especially Sedans, it's hardly possible to switch gears by ear, and the developers are obviously aware of this problem and have now installed a detailed audio menu where you can switch to the externally muted engine sounds and adjust individual elements. Nevertheless, the audio is not very dynamic and generally it feels a little cheap, which also applies to collisions, tire squeaks and so on. This is one of the biggest dents in Driveclub VR.

The visuals need to be mentioned too, because in the distance they really do become pixel porridge. However, the landscapes are still beautiful and the sense of place offered by virtual reality is hard to convey with words. We hope that with the PS4 Pro the graphics are turned up a little and the whole thing will get more beautiful and feel more realistic. This would give the experience another significant boost.

Let's just hope that Driveclub VR retains the virtues of its screen-based predecessor in the sense that it's constantly improved over time. The basic building blocks are definitely promising, though, and should be enough to excite petrolheads who want to sit in the driver's set of their favourite car, even if they have to put up with some motion sickness to do so.

HQ
Gamereactor UK
+
Great sense of place, good gameplay, lots of cars and tracks, loads of content.
-
Lots of potential for motion sickness, pixelated image, weak audio.
is our network score. What's yours? The network score is the average of every country's score

As much as I understand the fascination with VR, this just doesn't work for me. I don't play hardcore simulators like iRacing, but I like Project CARS, Forza Motorsport 6 and Forza Horizon 3. Similarly, when recently played Gran Turismo Sport, it simply clicked.

But that doesn't happen with Driveclub VR. It doesn't click. The graphics are so incredibly pixelated and washed out that during the races that I can hardly endure them for more than one lap. Of course, when it comes to VR racing on PC, the platform is already much further ahead (at a much higher price), but even Project CARS on a £1500 PC with Oculus Rift or HTC Vive fails to convince me at this point in time.

I love to sit in the VR car, look around and admire the surroundings, but then I see my motionless VR legs and I shudder. This applies to PSVR, Rift and Vive. Then, when the Driveclub-train starts, my eyes soon hurt. The graphics are just terrible. It kills all the fun for me - as much as the fundamental fascination is there. And whoever was responsible for the sound design let the team down.

However, I still see the general potential in VR racing. In a couple of years, the whole thing could feel and look much better.

"The landscapes are still beautiful, and the sense of place offered by virtual reality is hard to convey with words."

"Too many people are underestimating the PS4 Pro without having seen it in action." 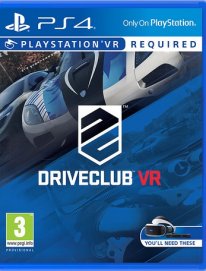