If there was one area where Crusader Kings II struggled, it was accessibility. From the start of its life back in early 2012 through until today, it has been a tough nut to crack thanks to the complexity of the experience it offers. The series is built around sandbox gameplay wherein you steer a powerful dynasty through history, but there are dozens of systems feeding into the simulation as well as some truly brain-melting succession laws that govern how the various characters progress. Any gains that might have been made over the years in terms of improved onboarding for newcomers have been somewhat held back by the steady stream of game-changing expansions that Paradox has put out. CK2 has been around for the best part of a decade, and to its credit, the game has never stood still. It is, however, starting to show its age, and the time for a new one is almost upon us. That's why we were invited to sit down with an early build of the CK2's royal successor and take an extended look at what traits have been passed down through the generations and which genetic defects have been left in the past.

We mentioned traits and genetics for a reason, and that's because Crusader Kings III isn't a role-playing game about being just one king or queen, it's about taking control of a whole family line and protecting your dynasty as you advance through history. You can do this in a variety of ways, but the general rule is you'll need support and power, and this can be done by being a competent ruler, naturally, but it can also be done via scheming, influence and pressure. To that end, there's a new 'hook' system that has you calling in and handing out favours in order to get what you want, and it seemed to work quite well, binding you more deeply to your entourage of followers. Royalty is a cut-throat business and as the years roll by you'll encounter a range of challenges, from political jousting and familial squabbling through to wars waged by the armies raised from your lands and paid for with gold reluctantly scraped from your coffers.

Yet before you can start a war with anyone you'll need to know how everything works, and that takes time. CK2 proved extremely popular despite its steep learning curve, but we still think the biggest challenge faced by its heir is getting new players into the heart of the experience and past a daunting layer of succession laws and political etiquette. One new feature that should make things much easier for newcomers is the encyclopedia that can be accessed when players hover over a keyword. This action opens up a pop-up window filled with relevant information that includes new keywords that can, in turn, reveal new pop-up windows. If you want to find out about a topic or law you can use this new system to easily explore its various intricacies.

The UI and placement of the various menus have been completely overhauled and, although it took us a little while to get to grips with the change, it quickly starts to make sense. After our time with the demo had ended we returned to CK2 so we could more directly compare the look and feel of the old UI and the difference between the two is night and day, with the older game looking suitably archaic when compared to its sleeker, more elegant offspring. A big part of this is the new visuals for the characters, which now dominate more of the screen and represent a huge improvement over the hand-drawn portraits of old. The new 3D character models are dynamic, and while each new game sees the characters starting out the same, any newly created children will be a blend of features drawn from their parents, with certain physical traits such as sickness also changing their appearance.

Naturally, the map has seen a significant upgrade, too. It's now much more detailed and scrolling out reveals a lovely-looking world map that we simply adored, while zooming in closer reveals new details and a more contemporary finish. It stretches from up near Iceland down to Africa and then over to India, with faiths and cultures from all over the world represented. Countries are made up of counties and these each have 'control' and 'development' levels that you need to keep an eye on, with a range of different buildings helping you to shape your realm to suit the situation you're facing. Once again there is a number of filters that the player can use to look at their surroundings with new eyes, and we found these especially useful as we played through our first game.

Unless you're a seasoned CK2 player, you'll probably want to do the same as us and play through the game's tutorial, which takes place on Ireland. While one of the more complicated religious systems was taken offline, the experience still felt complete and offered a small, focused island wherein you can experiment with the game's many interlocking systems. We lasted for four generations before we started one too many wars and ended up getting swallowed up by Scotland, which had been steadily expanding its influence on the island.

The Scots attacked despite our best efforts to befriend them. Indeed, we spent a lot of time trying to charm our neighbouring king and he had a very positive opinion of us (ultimately it didn't help, but at least we tried). CK2's opinion system returns, and our last ruler was very-well liked, but we were able to shape her personality to a greater extent via an RPG progression system that lets you unlock various abilities over time. In fact, you can start shaping the style of ruler you want at a genetic level, picking a partner for your character who has complementary skills and then giving their child an education that will define their adulthood. Early generations of our dynasty were military-focused, with bonuses to marching speed and unit effectiveness, both of which greatly helped our militaristic expansion. Later heads of the family were more diplomatic, however, forcing a rethink in terms of how we approached each situation.

Religion looks like another area that has seen a fair amount of innovation, with more ways than ever to incorporate matters of faith into your rule. The most significant addition is the range of new options you have when creating new religious faiths. Using fervour to your advantage is one way to use religion as a tool for expansion. Fighting heresies is another way of boosting the faith of your people (and fits into the crusading alluded to in the game's title), but you might prefer to create your own faith and use that shared belief to create national unity. The possibilities seem endless.

Another new system is linked to the stress of your ruler. It's designed to feed into role-playing, and making decisions that go against your character's existing personality traits will make them more distressed. You can develop coping mechanisms, and these are often represented by choose-your-own-adventure-style mini-stories that pop up systemically during play. These personal anecdotes appear frequently, although we encountered just a smidge of repetition during our twelve hours with the demo. Maybe that's something that will come into play more often after many hours with the game, but it didn't feel like it was going to be a major problem.

The start date has moved back compared to vanilla CK2, and therefore the action starts before 1066 and the Norman conquest of England. A number of starting points have been suggested too, with brief descriptions offering you an idea about the kind of experience you're likely to have. Difficulty in Crusader Kings III relates to the precariousness of your situation, and if you're surrounded by powerful, dominant countries you may well find yourself in trouble early on. That said, the fun doesn't always come from attacking your neighbours, and often it's the ride that delights and not the destination. Like its predecessor, this new Crusader Kings shines brightest when your role-playing and the sandbox come together to create bespoke moments that couldn't have happened to anybody else, often as a result of the scheming that goes on behind the scenes of all your diplomatic relations.

It's hard to say just how consistently Crusader Kings III will deliver these moments, but based on the dozen or so hours we spent playing what must be a near-finished build of the game, this next entry in the series will continue the traditions of its predecessor. Except, this time everything seems cleaner and more accessible, with all aspects of the overhaul appearing more than skin-deep thanks to new and refined systems that change things up around a familiar core. Certain aspects are missing, such as trade and the inventory system, but what's included seems focused on bringing character and drama to the fore, while at the same time incentivising players to build their legacy over the generations.

After we'd handed back the reins of our press demo, we tried to go back to the last game for one last hurrah, to carry on with all the intrigue and scheming, but after a short time, we put CK2 down and resolved to wait for the new game to arrive later this year. Now we're just waiting on Crusader Kings III's coronation on September 1st so we can get a proper look at the new dynasty simulator because this first taste has only whet our appetite for more.

Crusader Kings III is currently free to play on Steam!

There are also a whole bunch of offers available on DLC for the game.

The Northern Lords Flavor Pack is bringing Vikings to the game.

The trait will use a randomised generator to ensure only the highest quality of poetry is delivered.

Plus there's a by-the-numbers look at how the medieval hatches, matches, and dispatches simulator has done since launch.

CK3 just got its release date along with a grand new story trailer detailing what's to come. 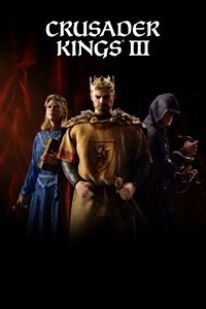