Everyone likes coming home, experiencing that calming feeling when you walk into a familiar place and encounter people you like, even love. People... or robots. Claptrap's always been a personal favourite during our time with Borderlands. So we're very sorry for the three new playable characters that are in the Pre-Sequel, because we just want to play as the wheel-spinning robot.

So sorry Athena, we're not going to investigate your mysterious connection to Handsome Jack. Sorry Wilhelm, who needs the money for surgery to become more robot than human. Our bad, Nisha, even if you've got an exciting range of action skills and would otherwise be our first choice - close-range cowgirl with shots from the hip? Our cup of tea. But you're not Claptrap.

We want to conquer the moon with Claptrap, use the low gravity to jump around and float. As a mechanical, we don't have to worry about oxygen, and can happily shoot off enemy's helmets to deprive them of air. Alright, we admit to being a little jealous of Wilhelm's drones, the ability to heal himself and the team, certainly useful for the tougher opponents we face.

But Claptrap has everything we want. His vaulthunter.exe program randomly fishes stuff out of one of his three skill trees, meaning you're rarely certain of what action you're going to perform. Chaos is inevitable - maybe it'll be the explosive Boomtrap, or the team-giving buff of the 'I love you guys!' ability. It's a bonkers addition, but suits the character perfectly, and blends well with a game that never tended to be cautious anyway.

"Best Buds 4 Life" is a skill that summarizes how we feel about Claptrap. That is the simple truth. Placed at the end of one skill tree is the ability to high-five him, and anyone that does are given team-aiding buffs.

The visuals are as gaudily colourful as ever. Numbers spew from attacked enemies to signify damage, and we spend long moments gazing at new gun, armour and grenade statistics. You now can collect moon rocks as an Iridum replacement to buy special weapons or buffs in Concordia.

We only had a brief 30 minutes with Claptrap (45 if we're honest, sneaking back in later in the day). We played through one mission with a colleague in which we stole an AI core, protected by two fellas by the name of The Skipper and The Bosun. Two seconds in, and we already feel like we've returned home. We're looking forward to a longer visit this autumn.

REVIEW. Written by Stefan Briesenick on the 13th of October 2014 at 13

"There is a lack of new, innovative ideas: this is just more of the same (great) stuff."

Although not everybody thinks it's real.

Matthew Armstrong is no longer with Gearbox.

The last AAA studio in Australia closes its doors

The developer that gave us Borderlands: The Pre-Sequel shut down due to high costs.

The Handsome Jack Doppleganger Pack is out now

Play as Handsome Jack (kinda) in Borderlands: The Pre-Sequel.

Secret Borderlands boss hides until you call him a dick

Your poor manners will finally pay off. 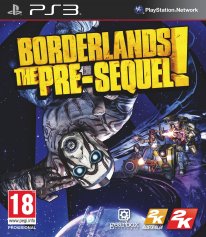