Obsidian announced its new RPG at GDC, and we had the opportunity to talk to the game's director and lead producer about a title that puts a new spin on the battle between good and evil. We talked to game director Brian Heins and lead producer Matthew Singh.

"We wanted to tell the story of being a hero in a world where evil has won," says Heins. "Where the player has not only sided with evil early on, but is now one of the leaders of the army. And how do you develop and how do you make those moral choices in a world where everyone around you is not the best person in the world. So you really have to decide do you embrace that or do you try and stand on your own a be a force of good in the world where you're surrounded by evil."

"I find a lot of games where you're playing as evil, it's about being a psychotic person running around killing everybody," continues Heins. "So we wanted to give more nuance to that. A lot of the choices in Tyranny aren't strictly black and white, they're all varying shades of grey, so even when you're making what you think may be a good choice there is repurcussions for different people that make that maybe not th ebest choice you could have made. So I think people will really appreciate the different levels of nuance in the game."

But the fact that evil won isn't the only thing that sets this world apart from other RPG worlds.

"We thought what if set this not in the traditional medieval high fantasy setting that we're used to in these RPGs," says Singh. "What if we did something more towards the end of the Bronze Age, kind of going into the Iron Age. We thought that this was a really interesting setting and we wanted to explore this kind of brutal world where there's a lot of human-to-human interaction, a lot of stories that we tell, about human greed and corruption and manipulation. And we thought that was a really cool place to set our world."

Obsidian are "looking to release in 2016" and that's as close to a release date we can get at this point in time. 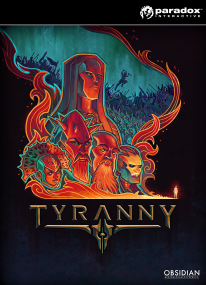