Dismiss or damn it, come October Batman: Arkham Origins will ship with an extra option on the main menu - one that's labelled "multiplayer".

Work on this online component is being handled by Brink creator Splash Damage. The UK outfit know what the reaction's likely to be. There's a degree of nervousness that greets media that file in for individual Q&As post-presentation and hands-on.

Yet for all the antagonism the initial announcement could bring, the studio are the wrong people to ask the fundamental question: "why?".

One of the strongest single player experiences dominating the marketplace, the Arkham franchise never needed a multiplayer. The reasons for its inclusion are for the publisher to answer. Splash Damage were brought on once that decision had been made. All they need to do is prove that the addition brings something good to the universe.

And Splash Damage don't sell themselves short in that department. Along with heavily stressing their role was to develop multiplayer externally from Warner Bros Montreal, so not to pull the SP developer away from the campaign. The UK studio reply to the question "why them", with honest conviction: they're multiplayer specialists.

Warner wanted to "do multiplayer the right way", so they got in contact. Splash Damage pitched ideas, and that brainstorming lead to what we play today.

If you were to extract and expand any element out of Arkham into the multiplayer, you'd likely join the rest of us - and Splash Damage - in choosing the Invisible Predator sections. A highlight of both previous Arkham titles, these tossed Batman into multi-floored rooms filled with patrolling thugs and potential hide points.

So many enemies meant you had to systematically (and silently) takedown each gun-wielding member in turn, using a mixture of gadgets, underground tunnels and generally being a sneaky bat-bastard. Get confident and you could unnerve and takeout multiple thugs at a time, leaping into a fray and disappearing as neatly as the real Dark Knight.

Splash Damage have taken that concept, created all-new environments from the Arkhamverse, built into it a progression system not too dissimilar to Brink, and added seven other players into the mix.

It's not a straight Versus. In any given match, that number breaks down to three teams: 3 vs 3 vs 2. Two rival gangs, three members apiece, working for Joker or Bane, trying to grab territory and take out the other team. Both have access to a gradually unlocking arsenal, special abilities and short-term dash and enhanced vision. Skulking in the shadows are two players in the role of Batman and Robin, who need to intimidate the criminals to win.

In the four rounds we play identity is randomised. That Splash Damage offer a "opt-out" option for playing the Hero suggests confidence in their gang warfare. It's in playing the criminal that'll you'll dig into the upgrades anyway: the Dynamic Duo are already kitted out with their gadgets.

Those four rounds are played on one map: Blackgate Prison. There'll be more areas in the final game, but Splash Damage can't talk about them. We get the same stock deflection when we ask about additional gameplay modes, though the inability to comment at least suggests we're not stuck to just one gameplay type.

Gangs earn points by clearing out the other team and capturing three areas around the map. Heroes need to build up an Intimidation meter through downing foes, with being creative in your takedowns charges the meter faster.

Blackgate is dense. Multiple corridors bore through stone cliffs and spill into larger open areas. The place is infested with multiple floors and labyrinth-like walkways. You can't get twenty feet without a sharp turn. It's built so there's little clear line of sight come long distance. The only position to get any overview at all is from rooftops and ledges, and those are only available to the heroes. Even hunched over a ledge, the sprawling map below is chaotic. It takes several deaths before we have a rough sense of the layout.

Colours are muted, clearly on purpose to make it harder to spot dark-clad hero or criminal against the backdrop. Splash Damage have added swirling groups of bats through the level to give the illusion of a fast-moving Dark Knight to spook gang members.

The developers have tinkered with the various in-game rules to balance out the three sets of players.

Gangs are stuck with a capped respawn number, but if a last remaining gang member kills a hero, his whole team are resurrected. There's also varying respawn times dependent on situation. Ammo is in short supply, and needs to be restocked from ammo crates (that are out in the open and have in-built sirens that go off to announce they're being tinkered with).

Heroes can't perform takedowns if gang members are covering the corners or vents where they're skulking, but Batman or Robin can dizzy attackers with cape or fist, and can corrupt gang's enhanced vision modes for a short while with a nifty utility belt gadget . They can also stick jammers on capture points, that'll need to shot off before gangs can start a takeover.

Gang members are slower and heavier, but are able to stick and roll between cover points, or vault over them. They have access to guns and a range of gradually unlocked special abilities mapped to the D-Pad.

There's an upgrade and progression system built in for the gangs based on XP earned during matches, that'll unlock new weapon load outs, outfits (with stat buffers) and one-off boosts. As default gang members will also have optional enhanced vision similar to Batman's, letting them spot enemies easily, though as with the dash and special abilities, it's short term use with a recharge needed to use again.

Bane and Joker both make appearances as controllable characters, introduced at certain points during a match, but need to be let into the area via randomised door entrances first. Fastest gang to their respective door decides which villain's getting some game time, and it's only the player unlocking the door who gets to control them. Each has special abilities - Bane has a running charge and rocket launcher, Joker a one-shot kill pistol and group-downing rail gun. Neither have enhanced vision, nor can they use corner cover.

We start our hands-on as Robin, and get the first takedown of the match. But Arkham's complex controls and our rusty muscle memory quickly become an issue, causing us to eat a bullet storm quickly.

The issue is that while combat-focused Challenge rooms in previous games let you whirl around the battlefield safely, here everyone's armed with guns. You're easily killed if caught out in the open. The emphasis then is purely on silent takedowns, and we realise we're not proficient enough to ghost through the map undetected for long.

Batman's own cover system, sticking him to corners but not letting him skirt along walls, isn't perfect for quickly scoping areas and making split-second decisions. So we stick to the roof and ledges, and try and play the mode like single player like Invisible Predator.

But things are lot different with player controlled enemies who don't stick to prearranged routes. We're told we can use one hero as bait to draw fire as the other sneaks behind, but the tight confines of the map make it hard to perform such a pincer manoeuvre. This will take some getting used to.

Equally when we're on foot as a goon, we pay less attention to guarding each tunnel or ledge in case we're dropped by Batman, more on downing the other gang. There's less paranoia than such a three-way set-up should have, but this is likely due to everyone adjusting to combating human enemies (as Batman or Robin) or playing a slower character (as a gang member).

This said, the eight-strong room gets tense as gangs are whittled down to 2 vs 1, and those sitting out of the game keep watch on the screens around them, their own TV only giving wide shots and glimpses of caped crusaders flying through the level.

We ourselves pin down a two-man team outside a capture point, and watch as one of them is downed from behind by Batman. Good fortune is reversed next match as we gun down Batman mid-takedown, only to discover we saved a rival gang member. Once we get acclimatised and players get pro, we can imagine games will get really tense as matches spiral towards the endgame. And coming out of the short session, we wish we were spending more time on it.

On such a short demo, it's incredibly hard to say whether the multiplayer has any staying power, but this first glimpse is promising. The "why" is redundant. Multiplayer in Arkham will be on your disc come October. Whether it'll be a post-campaign dabble or lengthier excursion in Gotham, we honestly can't say right now. But it is a lot better than what it could have been. And that's due to a solid premise and a multiplayer team who know how to get the job done. 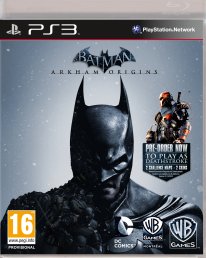