Rare have released the first screens from the HD version of Banjo-Tooie while revealing that the game is going to be released in April over Xbox Live Arcade. The game will also feature "the original Stop 'n' Swop" as detailed below:

"As with the XBLA release of Banjo-Kazooie, you can expect all the fully-featured fun from the original game. But there's more - 4J Studios have dredged the Banjo team's collective memory and implemented the original plan for Stop ‘n' Swop, for the first time on any platform ever and after many long years of waiting. Without going into too much detail, the Stop 'n' Swop items collected in Banjo-Kazooie will ‘magically' appear in Tooie, resulting in... well, you'll just have to find out. What could be cooler than that? Nothing, that's what - not even Kazooie turning into a dragon."

Banjo-Tooie headed for XBLA in April 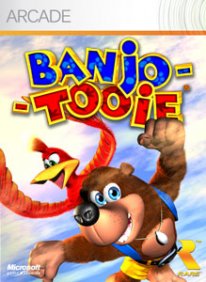