Just ten months after the Japanese premiere of Atelier Ryza: Ever Darkness & the Secret Hideout, developer Gust and publisher Koei Tecmo are already announcing the next game in the long-running Atelier series. The direct successor Atelier Ryza 2: Lost Legends & the Secret Fairy was officially confirmed in the afternoon after classification boards took care of the game last week. Title heroine Reisalin Stout will be the first protagonist to take the lead in two successive branches of the JRPG series, because the first game seems to be very famous among the fans (according to publishing partner Koch Media it sold 420.000 copies).

According to them, the game will release "this winter", so it will be available on PlayStation 4, PC and Nintendo Switch at the beginning of next year at the latest. However, as of yet, the gameplay has only been shared in the Japanese edition of today's Nintendo Direct Mini. Next week (July 29th) there will be more information coming from the game's official website.

We checked back in on Ryza, as she looks to explore ancient ruins hiding some Lost Legends.

We're taking a look at the JRPG sequel on our stream this afternoon.

The title heroine returns for another charming adventure on PS4, Nintendo Switch and PC. 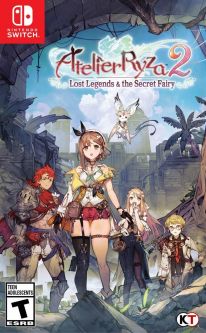