It is quite painful to watch the first moments of Assassin's Creed: Brotherhood play out on the television in the hotel room Ubisoft has rented in downtown LA. The villa that I spent so much time and virtual money on upgrading is blown to bits as the Borgia and the Templars mount a full scale assault, with cannonballs raining down from above. It does hurt a bit inside to see it.

Assassin's Creed II was one of my favorite games last year, and one of the single player games that I spent the most time together with during 2009. With Assassin's Creed: Brotherhood we won't see a new main character, like we did between the first two games, and we'll once again play as Ezio Auditore da Firenze. It starts right where the first game ended, with Ezio having returned home from his brief journey to Rome at the end of Assassin's Creed II.

But Rome will play an important part in Brotherhood, since that's where he'll go after his villa is destroyed. He will fight the Templars and the pope on their home turf, and to do so he will have to train new assassins to help him. That's where the brotherhood-part comes into play. You will rally people to your cause, and level them up in various disciplines - close combat or archery for example. You will then be able to bring up to six of them with you when you go on a mission as backup.

We're shown an example, where Ezio simply points at a guard that stands on an adjacent roof. Out of hiding comes an assassin and pounce him from behind, the kind of dirty work we're used on doing ourselves. When Ezio is stopped by a couple of guards, hidden archers make swift work of them. Exactly how it will be used in the final game remains to be seen, though - the situations we're shown are obviously quite far into the game, and at the same time Ubisoft will need to still give us an actual challenge.

Just like you upgraded the villa in Assassin's Creed II, you will be able to upgrade Rome. Rome was hardly a nice place around the turn of the 15 - 16th centuries, and it's under complete Borgia control. By upgrading it you're supposed to give its citizens their morale back, a feature that is probably tied in with the actual recruiting of new assassins. You'll also be able to ride your horse in the city, that's supposed to be around three times larger than Venice was in the previous game, and combat has been sped up quite a bit by the look of things.

A new feature in Assassin's Creed: Brotherhood is the multiplayer. We were not shown anything, but there was talk about it not being typical deathmatches. It will focus a lot on the same stuff as the singleplayer, where you blend in with the crowds and environments to take down your opponents. Scores are not based on how many people you kill during a match, but about how and when you kill them. Exactly how it works remains to be seen, though.

It's hard to say how Assassin's Creed: Brotherhood will be when it's released in mid-November. The development time is pretty short, even if it simply kept going after Assassin's Creed II. Activities like firing cannonballs at approaching siege towers look fun, but since we didn't get to play ourselves it's hard to say anything deeper about it. Multiplayer, at the time of writing, is a pretty big question mark and how Rome looks and feels now that it's actually open to exploration remains to be seen.

But as an Assassin's Creed-geek, and a lover of Templar and assassin history, I can't help thinking that Assassin's Creed: Brotherhood looks pretty sweet. I'm certainly looking forward to getting my hands on it in November.

Thank you for your time. We will take care of this matter as soon as posible
I guess it will be a great game, but I still think the Assassin's Creed games are a bit to easy... 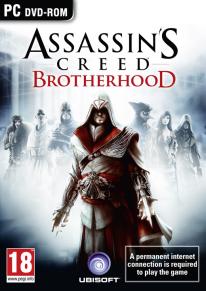