Age of Empires III: Definitive Edition opens with a note. In it, World's Edge addresses the portrayal of certain cultures in the first iteration of the game, which set sail all the way back in 2005. Continuing the trend established by its predecessors, AOE3 took a significant step forward in history and featured more modern units than the first two games. There was a particular focus on the age of colonisation, where the European superpowers used their technological advantages to subdue the people of the Americas.

For this updated version of the game, inaccuracies have been corrected and, by the sounds of it, World's Edge has made revisions in the best possible way, consulting the descendants of those involved and making sure to be respectful and authentic. Going in, I had wondered how this would be handled as certain actions in warlike games can feel slightly off if the context isn't carefully established, and I was certainly pleased to see it dealt with upfront and centre here. AOE3 makes a good first impression.

Later, once you're into the game proper, it quickly becomes clear that this is more of the same. More history. More carefully restored visuals. More classic real-time strategy. I played the start of the Blood, Ice and Steel story campaign (it's one of three campaigns and sits alongside DLC chapters Fire and Shadow and The Asian Dynasties), sampled a historical battle over the city of Tangiers, and tinkered with the various options in the skirmish mode, which lets you take control of one of the game's 16 civilisations and battle an adjustable number of opponents.

Bringing three updated Age of Empires titles out in quick succession has allowed World's Edge to make them feel cohesive, and the quality graphical overhaul that characterised the first two games is present and accounted for here, too. It looks great, there's no doubt about it, and viewed as a collection it's hard not to be impressed with the quality of the overall presentation. The restoration of these Ensemble classics seems to have been done with the greatest care.

In terms of gameplay, the thing that struck me was how busy everything is, and I think it's expected that you won't be coming to this one as a total noob, rather it's assumed that you'll have battled through the first two games and will come armed with that knowledge. There's a lot going on and it took me a while to find my bearings, although while perfecting your build order is still at the heart of things, commanding your units and managing your economy is quite intuitive. In the main campaign, there are objectives that help focus your play, but the heart of the experience is developing a well-balanced infrastructure and then using your resources to drive military expansion.

Inbetween missions and outside of the campaign there's a 'home city' that you can upgrade over time and that reinforces you in-game, although this strategy layer is not well explained and its implementation feels a little archaic - it's the most "of its time" part of the package. It doesn't matter, though, because the real meat of the experience is the game's many scenarios and what happens during play. During a typical game, you advance through the ages, and doing so naturally unlocks certain benefits. Things start off during the age of discovery and end up with the industrial age, and along the way you need to upgrade your buildings, build up your forces, and manage them carefully during combat encounters.

In that sense, AOE3 doesn't stray far from the script, and it's very much in keeping with what we've seen in the first two games. Much like the other Definitive Editions, this update comes with updated 4K graphics (that look like you remember them but are, in reality, very nice to look at and wonderfully detailed) and a remastered soundtrack. There's some new stuff worth mentioning too, with the addition of the aforementioned historical battles as well as some challenge missions that are well worth taking as they'll remind you of the various gameplay fundamentals that you'll need to master. On top of that, two new factions have been added (the Swedes and the Inca) bringing the total to 16.

I didn't tinker with the multiplayer side of things because I'm not a masochist and playing RTS games online never ends well for me, however, I did enjoy my time with the single-player portion of the game. The final release is due out on October 15, so stay tuned for a more comprehensive look at how Age of Empires III: Definitive Edition holds up. My first impression, however, is that it's going to be a fine conclusion to a carefully restored strategy series.

"The series might be getting on a bit now, but thanks to some thoughtful refinements, the years have fallen off."

The third game in the Ensemble series is preparing to set sail once again, this time with World's Edge at the helm.

Age of Empires III is heading to PC in October

Two's company and three's a trilogy, and now we just need Age of Mythology to make it a full set. 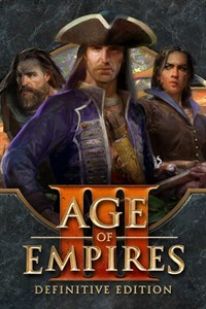