Zoo Tycoon's a tweaked take on the popular PC franchise, redone for its transfer to console. Developed by Frontier Developments (the studio responsible for Kinectimals and Kinect: Disneyland Adventures) the intention is to retain the core essence of the Windows PC games, while creating something new for consoles.

Unsurprisingly, given Frontier Developments' success and experience with Microsoft's motion capture hardware, this new tycoon has substantial Kinect support. Players can use voice commands to navigate menus and can interact with their adopted animals through gestures and facial recognition.

While the game's also due for Xbox 360, this review is based on the Xbox One version. It's immediately worth noting how impressive it looks. The cartoony human models are a little cloying, but the animals are the stars of the show, and everyone of them looks incredible. Every creature has been created with such exquisite detail that it's hard not to marvel at how lifelike the depictions are. When an almost photorealistic elephant bows its head and curves its trunk to take an apple from your hand, the sight is truly something to be considered worthy for a new generation of games machines.

As a management simulation Zoo Tycoon isn't the most challenging. There's plenty of depth and features, all of which are very accessible and easy to use. Experienced veterans of the genre are likely to find things pretty straightforward, but for newcomers there's a detailed training mode featuring ten detailed interactive tutorials that cover every aspect of the mechanics. It's worth bearing in mind that Zoo Tycoon is meant to be enjoyed by the entire family, and has been created with the casual player in mind.

Tutorials aside, there are three further game modes to get stuck into. Freeform mode allows the creation of a huge, ever expanding zoo where money isn't a concern. It's probably the best mode for very young players, or those just wanting to explore the features as opposed to testing management skills.

Challenge mode is the best option for experienced management sim players. Due to the limited funds at your disposal, overcoming the difficulties of running a zoo and keeping profitable is your main objective. This is the mode most likely to test you. Campaign mode is where most players will find themselves going. It provides 20 scenario-based zoos to manage from all over the world. Completing each scenario earns rewards that can be used in other game modes.

At the core of every mode is a simple but satisfying reward scheme. As the assorted collections of adopted wildlife grow, so does the zoo's reputation. With more fame comes more unlocked animals and objects. There's dozens of unlockables, the best of which are different species you can adopt for your exhibits. The different animals are unlocked depending on your zoo's level. Unlocking every type of animal is decent motivation to constantly press on.

The online options are exciting, and promise a fantastic way to co-manage a zoo with a friend. Unavailable to test at the time of review, Frontier Developments have promised that all game modes are capable of supporting a total of four players online. By saving the zoo to the cloud friends can cooperatively drop in and out to take on maintenance duties and build improvements. It doesn't matter if players aren't online at the same time, as cloud functionality allows players to log-in at their leisure.

So players can distinguish between each other online, and also to add further levels of customisation, there's a reasonably robust player builder. We're not talking any sort of deep character creation, but gender, hair colour, skin colour (for some reason under the label 'face' in the game) and outfit, can all be chosen from a handful of options.

The pacing of Zoo Tycoon is very gentle. There's a constant feed of challenges that include taking photos of animals, building new facilities, rehabilitating wild creatures and returning them to the wild, and making sure your zoo is the best maintained in the world. You'll never lack for things to do, but there's no great disappointment if a few opportunities pass you by. The punishment is minimal; you miss out on the reward attached to completing the challenge and, depending on the game mode, have to pay an insignificant cash forfeit. Sometimes challenges involve driving the in-game park buggy through various checkpoints. The buggy isn't fast, and the checkpoints aren't difficult to reach, though it is an enjoyable distraction.

What Zoo Tycoon does superbly well is to encourage personalisation and interactivity throughout any time spent playing. You choose the exhibits you want, where to place them, which animals you want, how to care for them. Various accessories will enrich the lives of adopted animals, whether that's toys, climbing frames, plunge pools or more practical things such as auto-feeders and animal showers that automate taking care of the creatures. Though the real fun comes from the interaction features you can create.

All interactions use the Kinect, which feels smooth and responsive. Children, and many grown-ups too, will adore them. You can create a platform to hand-feed giraffes or other gentle animals. Set up a hose to wash the likes of bears, rhinos, and tigers, by gesturing at the screen. Best of all though are the 'sensory enrichment interactions' that allow you to engage your creatures one-to-one.

You can make a lion roar or stand on its hind legs by waving your arms or holding out a hand. Play 'monkey see, monkey do' with chimpanzees by standing in front of the Kinect sensor and covering your mouth, then ears, then eyes. The gorgeously animated chimp behind the glass mirrors your actions. Part of the reason it is so captivating is because it's so realistic. For a brief moment even the most cynical mind can forget they're looking at a television screen.

Being a family game, there are things players simply can't do. Placing a bear with the elephants, for instance, is not allowed because bears and elephants "are not compatible". Animals have to be kept in enclosures too. It might be momentarily entertaining to let a Bengal tiger roam free amongst zoo guests, but it's not suitable content for the all-ages audience Zoo Tycoon is created for. In a similar vain, the buggy cannot collide with people. Get too close and they will magically jump out of the way before there's any impact.

As well as walking or buggying around at ground level, a top-down view is available by using voice command or pressing the Y button. In the top-down view the presentation is closer to that of the PC games. You click exhibits to check the status of your animals, adopt new ones (provided there's room), and install new equipment. There's a decent amount of options available from the start but plenty more to research. Researching takes an amount of time that seems dictated by the quality of what you want. You can only research one improvement at a time, but are free to explore other aspects of the park while you wait.

Keeping guests happy requires more than just great exhibits, they're not necessarily the best money spinners either because of the costs of maintaining them. Concession stands, including burger huts, coffee shops, and ice cream vendors can bring in decent amounts of cash and keeps visitors from going hungry. Conveniences like restrooms also need to be made room for.

Making sure your park is profitable is essential in the Challenge and Campaign modes. To assist your planning detailed graphs and charts can be accessed via the zoo entrance menu. Clear financial analysis shows what is profitable and what the biggest expenses are. With these figures in mind it's simple to make a few slight modifications and turn even the most financially unstable establishment profitable. Advertising is an option to generate new business, and there's many different ways to approach it. You can start a billboard campaign, distribute flyers, start a TV campaign or try your hand at viral marketing.

As well as providing an enjoyable and entertaining experiece, Zoo Tycoon also aims to educate players. An in-game 'Zoopedia' provides a wealth of information about everything to do with the game and it covers real zoos too. Of course it's the animals that have the most comprehensive entries.

One of the most rewarding things to do is level up an animal until it's ready to be released into the wild. Once released the player can keep track of how the animal is coping outside of the zoo. Thankfully, in all the hours I played none of the creatures I released had suffered a bad integration into the wild. Some even became pack leaders.

Zoo Tycoon is very enjoyable. As a family game it excels thanks to gorgeous visuals, user-friendly interfaces, an abundance of interactive features and informative content. It's not a game for everyone, there are plenty of features but it's rarely a hefty challenge. It's a game to be enjoyed at a relaxed pace, an experience to celebrate and share because it's so refreshingly pleasant.

Gamereactor UK
+
Animals look incredible and are brilliantly animated, Kinect functionality is very well utilised, Loads of content
-
Not significantly challenging, Mature players may not like the family sensibilities
is our network score. What's yours? The network score is the average of every country's score

"There are plenty of features but it's rarely a hefty challenge. It's a game to be enjoyed at a relaxed pace, an experience to celebrate and share because it's so refreshingly pleasant." 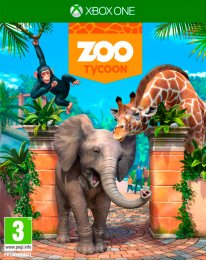