Nintendo has traditionally been top-of-the-line when it comes to consistently providing its fans with some of the very best side-scrolling platform experiences, and in the past decade, the company has clearly tied its most beloved characters and franchises to a specific playstyle, trying to cater to every audience possible. Thus, we got the New Super Mario series sticking to the more traditional precision-platforming, the Donkey Kong Country series provides a hardcore and demanding experience, and the Kirby entries reduce the challenge to welcome kids and new players in a sweet, more gentle manner. Now, where does Yoshi fit?

With the excellent Woolly World for the Wii U, it was made clear that Yoshi could find its very own place and style. If you didn't play it, it was a combination of the collect-a-ton exploration and mechanics introduced with SNES masterpiece Yoshi's Island, together with a cutesy presentation and more relaxed pacing. And now with Yoshi's Crafted World, the debut of the multi-coloured dinosaur on the Nintendo Switch, that personality has been further honed.

Once again it's all thanks to Good Feel, the Japanese studio responsible for reimagining both Wario and Kirby as modern platformers, and then for bringing Yoshi back. Most recently the dev had the challenging task of making a fresh Yoshi game that had to move away from the yarn-ish worlds previously explored by Kirby, while at the same time feeling familiar and ultra-cute. And the developer has succeeded, even though this isn't as quite as wonderful as the studio's previous entry.

It's all in the title when it comes to how the studio kept things fresh; the whole world looks, feels and works as if it were made of crafting materials put together by a 5-year-old kid, and you use magnets, plastic bottles, straws, sheets, and cork. The game also borrows a thing or two from the good old N64 title, Yoshi's Story, for example in how areas are presented, and how it extends paths into both the background and foreground of the levels.

The ability to throw eggs at objects on both planes - and not only the one you're currently in - is the most important addition to your classic "make eggs, throw eggs" core gameplay loop. It's nicely executed, for the most part, as soon enough you start taking into account the overall depth of the stage and constantly look for collectibles and secrets that could be hidden (or blatantly saying hello) pretty much anywhere. What's more, enemies and dangers are also designed and placed to take advantage of the added depth, which means more variety and challenge is thrown into the mix.

There's an issue with this new feature, though, and it's our main gripe with the game. The throwing mechanic is based on a lock-on system, meaning that, if your crosshair doesn't stick to your target, it'll always be aimed at your current 2D XY axis. In other words, if you were trying to hit a shy-guy in the background, and you wanted to anticipate their movement, you will miss the target - only shots at locked-on targets will be successful. This makes for several annoying moments during the game, particularly in the most precarious situations when you have to dodge enemies while trying to aim accurately, or when you tackle one of the tricky time-based sections, or when you try to anticipate the question clouds' movements in later levels.

It's not broken, though, and it works most of the time. In fact, it feels really good when you connect several well-aimed egg-shots while you nimbly move, swallow and ground-pound. And, to be honest, we can't think of a better implementation than the sticky lock-on feature - you don't want the player to carefully aim in the 3D space in a game like this. After all, upon completing the game, when we had got properly used to the mechanics (and had learned a couple of tricks), it wasn't half as annoying as it was at the start.

We aren't totally happy with other design decisions, though. For example, the beginning of the game might put off seasoned players as it's too slow-paced, and the same can be said of the sections without eggs or even the placement of certain checkpoints. It can be frustrating having to replay pretty long sections of a level when you run out of hearts, as it involves a significant trek and grabbing all the collectibles once again. We love a good challenge, don't get us wrong, but in this Crafted World, it sometimes feels like punishment is a chore more than an invitation to hone your skills and improve.

It's not very difficult either, for better and for worse. We understand Yoshi games are all about finding collectibles in pretty long, but tranquil levels, with the challenge found in trying to 100% each level by grabbing all the red coins and smiley flowers. But even though we admit we're fans of the series and have mastered many of its systems by now, we would've welcomed a few more challenging sections here and there. As it is, save for a few cleverly hidden flowers or the occasional frustration due to the aiming, it was a pretty smooth run and the only thing preventing us from perfect-ing most of the stages was the heart-based health meter, which at the same time is another collectible. But even that can be softened with the (fashionable and never-ending) collection of costumes you unlock at the gashapon try-your-luck machines, which act as a shield with several added hits.

Our other gripes have to do with the co-op mode and the audiovisual finish. The former, is down to it not being as comfortable to have two players work together as it was in Woolly World, as every now and then you end up sitting on your pal's back, unintentionally swallowing them or stealing their eggs, not to mention it's another element to dodge when you try to aim.

As for the audiovisual aspect, it is true that the image quality is not as good this time, as we see a particularly blurry whole when in handheld, but we have to say there are a lot more elements, realistic textures and really nice effects going on across several planes, which really work with the crafts, scraps, and materials used. And as animation, design, and art are also spot-on, the experience (we recommend playing in TV mode) is just beautiful. And music-wise you'll for sure miss the tunes by Tomoya Tomita, as Kazumi Totaka's Animal Crossing style OST feels a bit too bland at times.

Now, we might sound negative, but we're just being picky as we know there are many Yoshi and Mario fans out there. It's mostly minor gripes, as elsewhere Good Feel's amazing effort should be commended. After a slow start, and especially in the second half of the game, levels are imaginative and varied, offering you something new at every step, introducing a good range of surprises and even trying out a couple of things that are out of the franchise's comfort zone (that we won't spoil here) in the later levels. Why there's no Nintendo Labo reference, we don't know, though.

The 40+ main stages easily give you for more than 15 hours of playtime if you're like us and try to grab every collectible on your first run, and this does not include the flip side of every single level (which is a really fresh twist involving the adorable Poochy Pups) and the additional collectibles you're asked to find in previously-completed levels (which, by the way, could've been accounted for when you catch them the first time). We also love the Yoshi's Story approach to the worlds and islands, as this time we get 16 varied areas with just two-three levels each (plus some great bosses), instead of your typical large, thematic world structure.

All things considered, although we weren't quite as taken with it as we were with Woolly World, Yoshi's Crafted World really stands on its own and, after a slow start, manages to deliver some truly fresh and varied platforming. If you consider yourself a completionist, or if you're just looking for a good, comprehensive platformer different to Mario and Donkey Kong, you shouldn't miss this one (even if you miss a few eggs at first).

Gamereactor UK
+
Great, fresh concepts with both the added depth and the craft designs. Makes you approach levels differently. Nice world structure. Couple of crazy ideas. Filled to the brim with content and collectibles: a completionist's dream.
-
Some aiming annoyances. Co-op is a bit messy. Slow start. Music not as bold as before. Where's my Nintendo Labo reference?
is our network score. What's yours? The network score is the average of every country's score

"Although we haven't been quite as taken with it as we were with Woolly World, Yoshi's Crafted World really stands on its own."

Charts: Yoshi's Crafted World comes in at number one

Sekiro has been toppled by none other than the cute Nintendo hero, who stands tall with his latest homemade adventure.

The Japanese commercial for the green hero's adventure is a pretty musical affair to get us ready for launch later this month.

See various mechanics in play as we showcase three different levels, which we explore ahead of the release later this month.

The upcoming platforming adventure Yoshi's Crafted World is getting a downloadable demo as soon as today.

The game will be coming our way in March, and the new video shows Bowser Junior and Kamek causing some trouble.

Multiple levels and enemies from the colourful adventure. 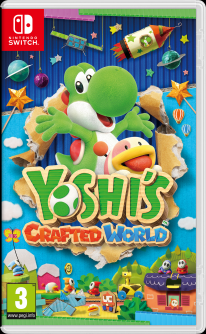