It's time to depart in search of Elysium. It's a journey, a new (capless) odyssey, and it's one that you simply shouldn't miss on your Nintendo Switch. After receiving universal acclaim with the series' last adventure on planet Mira, Monolith Soft. returns once again with the signature style that has defined the series. It's a fantasy tale that comes with a prominent Japanese style across all facets of its design and, of course, it's an experience of titanic proportions.

The studio has decided to once again embrace the narrative style you'd find in any Shonen-like release with Rex, a stubborn youngster, who's joined by Pyra for an adventure that takes them through many amazing locations, where they meet an expansive roster of characters along the way. Yeah, you'll see regular clichés on screen (a bath sequence set in hot springs included), but it doesn't feel confined. The characters, in fact, grow and develop throughout, which feels nicely enriching.

The narrative is split into chapters; it starts strong and is full of twists and turns. Each episode shifts focus between the characters and their backgrounds, and the brilliant, dynamic cutscenes move the story forward during big events. It's well-paced and, except for the odd miss (the fourth chapter which revolves around Tora, for example), it always tries to keep you on your toes by means of new characters who make things more complicated.

The starting point for Xenoblade Chronicles 2 is the search for Elysium, with the drivers, the blades, and the Tree of Life standing as the main pillars of the plot. The former are individuals with a special gift, able to connect to the blades, artificial forms of life confined within Core Crystals.

These weaponised lifeforms are vital to the new game. Each party member is allowed to bring up to three of them, and the blades chosen will often define the weapons that can be used during combat, as well as giving access to different abilities which are specifically linked to each one. It's a system you'll find with every single character, save for exceptions such as Tora the Nopon and his companion Poppi, who have a completely unique system of their own.

These beings carry with them most of the character's equipment, who, at the same time, is allowed to have his or her own item bag and, of course, develop their own abilities. Blades also add variety in terms of look and design (as you'll find no cosmetic variations when it comes to armour). There are blades of all shapes and sizes, each one adding their own unique style to the mix. In other words, Monolith Soft. has opted to keep the look of the main cast throughout the game, and it's the artificial beings who add variation.

Related to different elements, there are both special and common blades that are unlocked via a lucky dip. You never know what you'll be getting when syncing up your crystal, though rarity varies depending on the type of choice made (common or special). To be honest, at times it's pretty frustrating to try again and again only to get the zillionth generic blade.

The growth and evolution of the blades is based on three elements; core chips define the weapon they'll provide, extra crystals add some stat buffs, and finally, there's affinity. The latter turned out to be one of the most interesting new additions, as it's a sort of challenge system that keeps things evolving. Most are simple requirements to fulfill (challenges like speak to 25 people), but others will require more time and effort. It effectively results in a character's evolving abilities being represented as an entity that accompanies them, and in this world and setting, they play a vital role not only in combat but also in how you interact with the environment.

For example, if you're stuck, how about melting down an obstructive door? Or, why not perform a super-long jump? These actions are facilitated by competences, a system which forces you to combine your accompanying blades' abilities to take advantage of them. On top of that, they add a little twist when backtracking through the world, which is a good way to help you to find new secrets. With all this, you might think that navigating the world has evolved with this entry, but the truth is that XC2 is less ambitious in terms of scale than XCX was. Its world, split into titans, leaves behind the fully connected world of its predecessor, and even though it allows you to move freely throughout the titans, it doesn't feel as cohesive as Mira did before.

That said, Xenoblade Chronicles 2 is superior to its predecessors in terms of environmental design. Not only thanks to the aforementioned competences, but also in terms of the variety of scenarios it offers, dynamic weather, and even changing tides, which allow you (or not, as the case may be) to access certain areas. The additional effort put into the world design means that even the towns are upgradable by completing quests and/or secondary tasks. Now they're no longer simple junctions and become another aspect you can influence, boosting your party in the process.

Elsewhere, enemies remain unrestrained, and that means that bumping into monsters that are 60 levels above you can be a pretty common occurrence. As well as that their behaviour grows in complexity as you progress through the game. For example, you might attack a tukhan which suddenly flees to call stronger, bigger allies, or it might scream out for reinforcements. More than once we've ended up in lengthy battles because combat turned out to be more challenging than we initially thought it would be.

In this regard, the difficulty curve is very well balanced, and you don't have to rely much on grinding and upgrading characters, more so thanks to the option of getting additional experience while asleep (which is optional, but makes the whole thing more accessible). Thanks to this mix of systems, there aren't many enemies who will make you suffer too much, as long as you learn and take advantage of the combat mechanics.

The combat system uses automatic attacks, arts, blade attacks, and group attacks, each one providing an additional layer of depth. Arts are abilities that let you fill up the blade special attack meter or enjoy effects that may even grant you a healing potion. Beyond that, by combining blade abilities from the whole party you can unleash combos which, in turn, might end up in longer, more powerful chained attacks.

Even though the combat screen & interface hasn't changed much, traditional mechanics do remain, such as QTEs or group bars to revive or perform group attacks. All of these elements and the ones mentioned above are combined and multiplied together as the foundation of a system that turns out to be increasingly engaging and addictive the more time you spend with it, and by the end, it becomes truly satisfying and rewarding.

Gameplay aside, let's take a look at the main concern for many; whether Chronicles 2 can improve on the technical side compared to Chronicles X. Aesthetically the game sticks to anime style, but it also uses some effects for an added layer of realism in the environments and enemies. What is undeniable is that you'll find some vistas where you'll hammer the capture button on your Switch, even in handheld mode (where resolution takes a hit from native 720p). Sequences and cutscenes show some exceptional animation work as well, though that's mainly the most important ones, and the secondary scenes are clearly weaker.

And before wrapping up, Mitsuda, ACE, Hiramatsu, and Kiyota's work deserves a mention. The finely-written and carefully recorded soundtrack has a place for both moving melodies and stronger, impactful combat themes. The feeling conveyed by every single track eases you into the fantasy story, fully moving away from Sawano's work in Chronicles X. It's the kind of soundtrack that gets in your head and stays there for a good while.

All in all, this is another exclusive jewel in the Switch's crown. Who would've thought the hybrid system would enter Christmas in this manner and in such good shape. Xenoblade Chronicles 2 is massive, addictive, and the work of studio given the freedom to express itself. The titan is upon us, and it's much more imposing than it looked from afar.

Advertisements
Gamereactor UK
+
The new combat system is neat: simpler execution but deeper possibilities, OST and some vistas are breath-taking, Tons of nods for series fans.
-
English VA not the best, Tricky to tell characters apart when amongst many enemies, Some blade designs are weak.
is our network score. What's yours? The network score is the average of every country's score

The saga continues with new story DLC this September.

Xenoblade Chronicles 2's story is the focus of a new trailer

See some cinematics before the game's release. 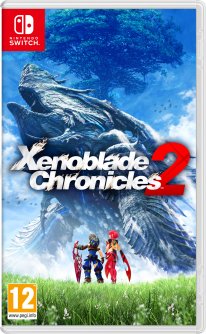