It all begins in a shining white, Star Trek-sterile room. A stereotypical manga officer and his lolita assistant explains for me that I have to start training. Sam Gideon stands in the middle of the room in his shining white high tech armor and explains in his overly strained voice that he has no intention of doing that, after which I get a quick run-through of how things work and the game itself starts up. Then it's like a giant hand stretches out from my television and slaps me ten times across the face. Hard. What just happened?

The answer is Vanquish, the absolutely most hyperactive game I've ever played, a title where no less than a hundred bullets are fired each second. A game that forces me to stay on edge constantly, which leaves me physically beat after a few minutes of play. And that's only the first level, which ends with a gigantic boss that basically demands his own weight in hot lead before he croaks in one of the most unbelievable fights ever. And it gets worse.

It's quite obvious that this is a Japanese action game, everything is a bit smoother and faster than in its Western counterparts. Imagine a Gears of War high on caffeine, but with characters so hard that they make Marcus Fenix and Dom Santiago come across as giggly schoolgirls. As usual in Japanese games in this particular genre, nothing comes for free either - you need stay alert, make fast decisions and show off some exceptional finger work.

I don't back down from a challenge, on the contrary I love to butt heads with hard games as long as it feels justified when I die and that it didn't happen because the game cheated. None of that is found in Vanquish and the high challenge is completely fair - it's not about luck, instead it's incredibly rewarding because I know I got through a tricky part through actual skill.

The flow of enemies never seems to stop, and the hordes are backed up by minibosses and überbosses. You'd be dead straight away if it wasn't for Sam's suit; it allows you to slow down time, throw yourself across the ground and rocket glide on your knees and carry around a sizable arsenal of guns.

An arsenal that can be upgraded and that becomes increasingly fun to use. You can carry around a maximum of three weapons at a time, that all can be upgraded about ten times each. The upgrades make the stronger, give them more ammunition and stuff like that. Personally I really enjoyed a gun that fires deadly discs that obliterates most things that get in its way while I rocketglided around the big levels.

Vanquish completely lacks multiplayer support, despite the fact that you play through it together with a computer controlled co-op partner. Luckily, the way the game works won't make you miss a human partner, even if it's something that would be given in a potential sequel. Right now the game is a bit too short, even if it's fun enough to play through a second time.

Pictures hardly make Vanquish justice, because the extremely fast gameplay makes it hard to see what actually is happening on screen. There are no such things as a freeze frame, and the general chaos is very well made. Despite the wild gunfights, explosions and acrobatics you constantly know what's going on which creates a kind of chaotic beauty.

We're talking huge spaceships that crash at your feet, 20 meter high mechanical monsters that blow up everything in sight and dozens of enemies with mounted machine guns blasting away - all at the same time. But it never gets out of hand. The superb controls keep you on top of things while you throw yourself between cover, duck out of the way and fire back at them. Sure, the voice acting is terrible and all the characters are hopelessly stereotypical. But seriously, I couldn't really care less. 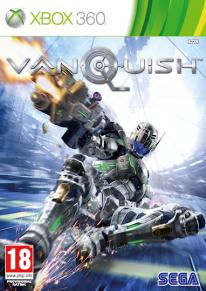