We've been waiting 10 long years for a console sequel to 2008's fantastic Valkyria Chronicles, and now it's finally here in the form of Valkyria Chronicles 4, taking us back into the conflict between the Atlantic Federation and the Imperial Alliance on the continent of Europa. This is Sega's WW2 epic set in its own alternate universe, and it's back with a bang.

For fans of the series, coming back to the console was major news. Both the second and third numbered entries in the series were both released on the PSP, and it felt like the series was doomed never to make a return save for some spin-offs like Revolution. Valkyria Chronicles 4 reversed the trend and takes place at the same time as the first and third games, but for the first time, the conflict is not set in Gallia.

If you missed this series the first time around, don't panic, as you don't need to have played them to grasp what's going on. In fact, VC4 actually feels a little detached from the series, but the back-story goes a little something like this:

It's the 1930s and we're in an alternate world where the continent of Europa is plagued by war. The Atlantic Federation in the west fight against the East Europan Imperial Alliance, and they're warring over a resource called Ragnite ore (effectively petroleum). This conflict was the background story to the other titles, but this time VC4 makes it the focus.

Gallia, the Ragnite-rich neutral country stuck in the middle, was the previous setting. Invaded by the Empire in the first VC, the story led us to see that neither the AF or the IA were innocent, however, we need to say boo to the Empire, as they clearly were the 'big bad'.

The only real link back to the previous titles is the fact that all the main characters are from Gallia. Strange, considering their neutrality and the fact the AF weren't exactly popular. In fact, it actually feels a little bit bolted on because of that, rather than part of the original chronicles.

What you have here though is a heavily story-driven experience that will take you around 40 hours to get through. It will take you on a journey of love and loss, and the characters are rich and engaging, such as Claude - the leader - who is a bit reserved and even cautious around the ever crazy Raz.

You will fall in love with the people you meet and the stories you hear. Told through a manga style, fans of the originals will see that it has returned to form. You care about the heroes and love each one for their quirks (like one who always wears a helmet or another who loves telling jokes). The new recruits who come onboard start to chip in during the cutscenes and side stories too, so there's a large and diverse cast.

The look of the cutscenes is sensational; it's almost like hand-drawn art. It's stunning and a fantastic way to tell such an emotional story, with the graphical quality carrying over into the main playable part of VC4 too.

It may sound cliche to call it a combination of genres, but that is indeed what we have here, since it's a beautiful JRPG that's a turn-based strategy game at its core. Witnessed from a third-person perspective, it also has some partially real-time elements to it as well. Weird right? Well, just try it, because it works.

The battles themselves can take anywhere from 20 minutes to an hour to complete. The earlier ones are pretty simple and have tutorial elements to them, but before long any mistake you make could be unforgiving. Before racing in, then, you have to think about counterattacks and the movements of the enemy. You learn to flank, to draw out troops, and to set up kill zones.

You take control of your troops from the third-person, and with a limited number of action points and shots, you run into your new position. Enter the sightlines of some troops, and they may fire. You can use your soldiers more than once per turn too, but with lower ammo and AP.

There are six character classes to play with on the field. The scout is your "run in and capture the flag" type (which stops the enemy respawning), while the Lancer is more of a tank buster. There's even a range of tanks and other vehicles for you to take charge of, while The Grenadier is a new addition to VC4 that quickly became our favourite, as they offer a new tactical element.

You can sit there and bombard the hidden spaces which often contain enemy troops as well, but later - with a few advances on the tech tree - you can destroy pill-box tanks from afar by hitting their radiators. This sadly makes the aforementioned Lancer a bit useless, especially if you stand an Engineer nearby to top up the ammo.

Tactics that let you cheese the system certainly make the game easier, and that was one of our little bugbears. The fact you can just camp and bombard seems to ruin the challenge a little bit. It didn't detract from the experience, but from memory, it seemed to be a problem with the first game as well.

Rather than upgrade individual characters, you instead upgrade the character type, which means that when you select your squad to go into battle, you can choose anyone, and unlike in some RPGs, there are no lower level characters to get neglected and ignored.

Characters aren't the only thing to improve in your headquarters. In the R&D section, you can also upgrade weapons and vehicles, as well as learn new commands which can be used in the battles to give your squad a boost, improving accuracy for example.

Your squad members also have friends they like to fight alongside, and it can set off a combo if one shoots while side by side with their friend. As you're probably getting by now, this is a strongly story-driven tactical experience that we loved, but be warned - once your character dies in the field, they're lost forever. That means they no longer appear in cutscenes or anywhere else for that matter, and so it can get emotional.

In terms of the production values we've already outlined our appreciation of the visuals and cutscenes, and the audio side of the equation is almost as impressive. Much of the music seems borrowed from the first game, and it stills works. It can be haunting or emotional at times, or invigorating after a win, setting the scene and mood perfectly.

Experienced players of the series will know the heavy story-driven elements mean that after you spend 20-60 minutes in a tactical dogfight, you may end up watching 20 minutes worth of stunning anime cutscenes. This may detract a little from the experience for the more casual gamer who's not willing to invest 40 hours into this, but we loved it.

How to summarise this, then? Well, not trying to be corny, but it's kind of like playing an anime film, albeit one with a tactical edge. The characters are a little over-the-top (but not too much), the story grips you, and the characters make you love them. The dialogue at times is a little cheesy, and there are a few cringe-worthy moments, but that's nothing new.

What you need to know though is that this is a stunning and immersive experience that will keep you playing for hours. It offers plenty of challenge, gives you a story to think about, and it's well worth spending the time it asks you to invest. We loved our time fighting against the empire, and it lives up to the expectation we had as fans of the franchise.

Advertisements
Gamereactor UK
+
Stunning graphics, Immersive story, Fantastic tactical play, Beautiful soundtrack.
-
A few ways to 'cheat', The prolonged cut-scenes may irritate some gamers.
is our network score. What's yours? The network score is the average of every country's score 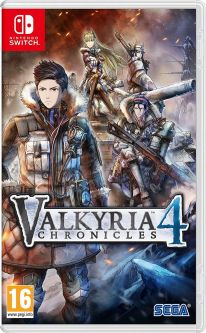