"So you're back, you son of a b**ch. We thought that you had retired, that you had hung up the beam katana for good. But no, you had to light it up once again, you had to unleash another stupid bloodshed."

This is more or less the attitude you encounter upon starting a new game of Travis Strikes Again: No More Heroes on the Nintendo Switch, the somewhat outlandish spinoff marking the return of the titular character. He's been MIA for nine years, and in that time his creator Goichi 'Suda51' Suda has been releasing multiple projects backed by several Western and Japanese publishers. But with the arrival of the successful hybrid console it was time to go back and cater to the Nintendo fanbase, which after all was the reason why studio Grasshopper Manufacture started reaching above and beyond their cult niche. Suda51 is back as director and mastermind with a game that is very, very weird, but not just in the Suda51 kind of way. It's also weird in many other ways too, perhaps in too many ways actually, for what appears to be a limited-budget project.

In none of the trailers did Grasshopper manage to clearly explain what this TSA: NMH really is, so now that we've completed it, let us do it ourselves so any doubt is finally dispelled. The initial premise revolves around a video game console, the Death Drive MK II, which literally abducts Travis, puts him into the virtual world, and makes him the protagonist of several games. So a bunch of games within a game, basically. From that moment on we're meant to see a selection of tributes to several classic genres, meaning varying gameplay. But it really isn't like that in the end.

What you actually find here is a beat 'em up that refuses to stick to a single presentation or structure, and thus keeps transforming itself as you progress through the levels, as you jump between the three worlds or dimensions on offer. The least important of these three is the real world, or at least Travis' reality. Here is where the fight with Bad Man takes place, where we see the caravan and the introduction of the twisted console. It's also the main hub where you change t-shirts, select missions, or jump to either of the other two alternate realities. At the same time these two spaces totally complement each other: the virtual world, where the gameplay happens, and a retro visual novel bearing the main narrative weight of the game.

Because, you know, the Death Drive MK II isn't your typical game console. It's an experiment with a very cool conspiracy background story, as of course expected by the creator of the Kill the Past trilogy. It's a pity then that that story feels so underdeveloped, for as is usually the case with Suda51's scripts, most of the focus swiftly shifts to the characters and their lives, as the world around them is set aside. The game tells you bits of the story during gameplay via dialogue with each level's bosses and sub-bosses, and then a different portion of the story by means of the non-interactive digital novel. Upon completing each mission, you jump on your motorbike and go exploring the world searching for the Death Balls, which are the console's cartridges. These are conversation sequences with a very retro (fixed black and green screen) style in which you learn about Travis's encounters and potential fights.

We get just six sequences, but they easily make for an hour and a half of dialogue. It's quick and agile reading, with short sentences, ugly language, and ridiculous situations, and we had a lot of fun with them. This half of the game is called Travis Strikes Again, and it's what sets the Switch game apart from basically any other similar beat 'em up. You wouldn't get many going as far as adding that much depth and consistency to the script, nor creating so many relevant characters when, at least technically, the strong point here is the arcade gameplay.

The problem is, it isn't. In spite of the many variants for each world, it's after all a pretty simple beat 'em up in which you fight your way through waves of enemies. Sometimes it's a 3D corridor brawler and sometimes a 2.5D sidescroller, with a puzzle-based stage thrown in there as well in which you have to build, and so on. The only ones that really feel distinct are a Spacewars-like shoot 'em up and motorbike races, as both are just a few minutes-long but rather convincing.

All these worlds ask you to a lot time mashing buttons (alternatively you can hold light attack so that is spammed automatically). As such, the basic attack system, with just two buttons and a single combo - plus jumping and dodging - feels shallow and not very efficient. And when enemies get harder it becomes almost useless, as you can only rely on special abilities.

With regards to these, there are a dozen of cooldown-based chips you can equip and use in-game, and in the end these decide those encounters. Enemy types aren't that varied either, but as is trademark from the studio their design is fantastic, showing a good range of different and annoying moves. Then again, level design and horde behaviour is so lacking it's difficult to enjoy combat fully, so in the end you kill them just to progress so that you can learn more about the plot.

Graphics are also to blame when it comes to gameplay not really clicking. The virtual world could've given room for imagining some really crazy stuff, as after all it's about themed video games. However, it's only the first one, a secret one, and spare portions of a couple that feel engaging. The rest are monotonous, dumb, and repetitive. Fortunately, since it's so basic and not very demanding as a consequence it's well optimised and we only witnessed a couple of hiccups when loading areas.

Other than the story itself, the best single thing you'll find in Travis Strikes Again: No More Heroes is its original soundtrack, which we guess is another staple of the series. Its music is so good you feel like closing your eyes to just play along to the beats and tunes. There are a couple of very different arrangements to the classic No More Heroes main theme (with original composer Masafumi Takada missing this time) - one in the caravan and one at the very end - which we're sure will make many fans happy. It's also nice that it doesn't rely on retro music or chiptunes, as it's more about modern electronic and blasting SFX.

The game is also packed full of details and references, more than most indie titles out there. The posters hanging on the walls of important places, the design of the Death Balls, the Lady Gaga-enemies, or even the games magazine you'll find among the archives - with tips and tricks to play better - all strike a chord, and then nods and references cover both Grasshopper's past and games evolution. As such, the t-shirts based on indie games are just a small part of the big homage paid by the Japanese studio. Just the mere presence of so many names and brands is a testament to the good relationships built by Suda51 during his long career. For example, a counselor Bug you'll find in every game - who mostly speaks nonsense - is clearly inspired by the just re-released Killer7. And there's much more we aren't allowed to discuss.

We've reviewed many games by explaining that their base or premise was good, but then they weren't as detailed or polished as we would've wished them to be. This is like the opposite, as Suda51 has created a very complete game, which is varied, rich, unique, and full of details and references, but with a faulty core, as the gameplay isn't as solid and enjoyable. So despite abilities and enemies being fun at times, and even though it tries to vary its presentation while the plot gets you hooked, the battles themselves end up being tiresome. Any fan will have a good time, rest assured, and anyway we found another relief in-game: No More Heroes 3 is on its way.

HQ
Gamereactor UK
+
Awesome music, Trademark conspiracy backstory, Nice character development, Many references, A tribute to video games.
-
Level design prevents you from enjoying combat, Repetitive situations.
is our network score. What's yours? The network score is the average of every country's score

"Even though it tries to vary its presentation while the plot gets you hooked, the battles themselves end up being tiresome."

At least in Japan, and this Complete Edition includes the Bubblegum Fatale and Black Dandelion DLCs.

Grasshopper Manufacture announced that the Switch-exclusive Travis Strikes Again: No More Heroes will be exclusive no more.

Bad Girl returns to the series with this DLC, which also brings in plenty of t-shirt designs based on popular games.

No More Heroes and Dragon's Dogma cross paths on Switch

Travis Strikes Again: No More Heroes and Dragon's Dogma will get crossover items from each other on Switch.

Suda51 on Grasshopper "coming back to our roots"

We spoke with the developer at GDC, where he talked to us about the process of developing Travis Strikes Again: No More Heroes. 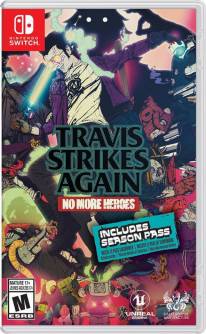