With a determined press of the button we bury our sharp daggers into the skull of the enormous spider one last time. The creature roars, blood gushing and we yell out in triumph surprising the grumpy old lady next to us on the bus. There's not much that comes close to downing a colossal demon after 15 intense minutes on a bus. The lady gets up and finds a seat further back in the bus devoid of demon killing hoodlums. We missed our stop a long time ago.

It matters little as we've just saved our village from yet another horde of beast from below. We've collected enough materials to forge a giant blade that will soon help us deal with giant scorpions. It's been eight years since these things invaded our world. Feudal Japan was turned into a flaming inferno as the malicious Oni showed their faces, and ever since it has been our calling to hunt them down and destroy them.

It is these warriors, called Slayers, that we get to know in the portable monster slaughter that is Toukiden: The Age of Demons. At the start of the game you're a rookie in this noble and proud order, and you'll soon learn to fight the evil that threatens your village. This fantasy world created by Omega Force (of Dynasty Warriors fame) is inspired by the rich Japanese mythology. Samurais swing their holy weapons, spirits use magical powers, and all things evil have large horns and wings on their backs. Not very original, but still well designed and expertly crafted.

The environments also strike us as interesting, at least from afar. Beautiful forests, high mountains and waterfalls grace the screen. But apperances deceive as the game doesn't offer up more than very linear corridors and invisible walls. Each environment consists of a selection of closed arenas without interlinking terrain and the only thing that populates the arenas are various enemies. As soon as they've all been dealt with you move on to the next arena, and once all the arenas have been cleared you're automatically returned to the village. There is no exploration and it makes it difficult to fully immerse yourself in the world and the story that is told.

The minimalistic level design is one thing, but the environments are also frequently recycled. The campaign is divided in a set number of chapters where each chapter contains a dozen or so challenges that play out in the same area. This means you'll start a mission, kill some monsters, return to the village to start the next challenge, and then return to the very same forest. This time in order to collect enough poisonous scorpion stingers. There's not a lot of variation to be had, and it's not very exciting either.

Focus is instead on the combat. What you're killing and why doesn't seem all that important. And thankfully combat is the absolute strong point of the game. As a rookie Slayer you get to pick from six weapon types at the beginning. There is the giant broadsword, the quick twin blades, the gigantic gauntlets, the long spear, the accurate bow and the elegant kusarigama. These weapons both look and feel unique, which allows for plenty of variation.

All enemies have strengths and weaknesses that need to be exploited for you to walk away victorious - and you need to know which tool to use for each job. Crushing a group of gnomes with gauntlets never grows boring, but when faced with a poisonous snake it's better to put some distance between yourself and your target and swing your kusarigama. There is a real weight to the weapons, and the combat also looks incredibly nice thanks to silky smooth animations, bombastic effects and the luxurious screen of the PS Vita. Flat geometry isn't something that bothers you as four coordinated samurais jump across the screens wiping out all oppositions that dares oppose them.

There are plenty of RPG elements that further flesh out the combat. New weapons are crafted from bones, shells and horns from defeated enemies, which results in even more attributes to keep track off, and once you've started your slaughter you're introduced with your first mitama. A mitama is a soul that was once trapped in a Oni, that you've liberated. These mitamas can be bound to certain weapons giving these supernatural powers. One example is that you can give your weapons a vampire-like ability to steal health from your enemies.

It is when Toukiden: The Age of Demons introduces its massive bosses that the combat really comes into its own. The colossal beasts are well designed and extremely deadly. You really have to use all the knowledge you've accumulated and master the combat system in order to prevail. These epic battles often lasts well over ten minutes through various phases where you need to focus on a certain weak point until said limb falls off and the ttack pattern of the boss changes.

It takes a fair bit of experimentation to find a winning tactic, and having to do this with the group members from the story often ends up in frustration. There is the option of playing with three friends instead, and this is definitely recommended. Finding a couple of likeminded companions that complete your own playstyle leads to fantastically entertaining boss fights where patience and skills are put to the test. And when you're able to create a new weapon from a massive horns of the monster at the end of the fight it feels all the more satisfying. This way you're constantly reminded of your progress.

This constant cycle of killing all things evil and using the leftovers to create better weapons is something we've seen before (Monster Hunter and God Eater comes to mind). These games have offered up open environments and other side activities to help immersion, and even if Toukiden: The Age of Demons fails to offer such diversion it still entertains thanks to the fantastic battles. It's not often we're treated to combat this well crafted and ambitious on portable devices, so if you're tastes lean more towards combat, then The Age of Demons may be something for you.

REVIEW. Written by Mathias Holmberg on the 19th of February 2014 at 21 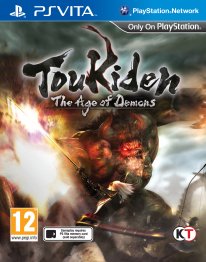