Those Who Remain is billed as an up-close, psychological horror game, and it's not long before we felt the influence of Silent Hill, with some fans even going so far as hoping that it would be something like that Kojima horror game that never was. Those Who Remain has many a good idea, and for much of the time it pulls them off, but sadly the experience also came with a few bugbears that we couldn't ignore.

You start off as a man on the edge, drinks in front of him, talking about his wife and child, and holding a gun ready to finish himself off. Next, we're heading to a motel to end things with a woman who is implied as being the other party in an extramarital affair. It's all very bleak, yet despite his obvious issues at the start, our main character does develop a likeable rapport with the player over time through his occasional comments.

Upon finding the motel deserted, you receive a creepy phone call from a girl who tells you to "stay in the light". It's an eerie start and you can already feel the tension building. Upon heading outside you find your car was stolen and is being driven away. It all feels like it's setting up something really exciting. From then on you head into the local town of Dormont, where
you visit deserted location after deserted location, occasionally bumping into other survivors who are equally confused as to what's happened.

You visit a gas station, peoples' houses, a police station, a post office, a library and so on, places that have, for the most part, all been abandoned, and you wander around looking for survivors and for clues as to what happened. However, the first big issue we had is that each of these locations feels very separate rather than part of one cohesive town, and after a while, our exploration felt formulaic.

One really cool feature that we liked is that your biggest enemy in Those Who Remain is the darkness. If you stray out of the light, blue-eyed creepy figures wielding knives and axes await you - one step too far and it will be instant death, with no chance of defending yourself. The suspense is really well crafted and makes you fearful of ever leaving a lit area. Sometimes, if it's more of an open area and you wander too close the screen starts to shake and at times we actually found our heart racing.

Just when you think you know what you're doing - solving puzzles and finding clues, staying in the light and escaping Dormont - the game throws a curveball at you. Suddenly, in one of the levels, you're asked to judge a resident of Dormont who is stuck in what looks like purgatory, and you are asked to make a decision that determines the ending that you receive when you complete the game. You collect evidence and are asked whether to condemn or save the person. However, during this and subsequent sequences, there were usually only two pieces of evidence and we frankly wanted a little more before condemning someone to eternal damnation. After doing this once, we were tasked with going through the same judgemental process throughout the game, and once again it became all a little too formulaic.

That said, we liked the atmosphere that the game was able to build - the graphics, premise and sound design all build a freaky and intense experience. But sadly, at times, the facial animations of the survivors were poor and that didn't help us to connect with them at all. This aspect of the graphics didn't impress and at times they even distracted us from the otherwise impressive world around us.

Combined with a confusing story that even contained parallel universes (a bit like Stranger Things), at times we felt a bit lost. At least it was exciting that we could step through a bright light and fix something in another reality to help you in the real world, even if it didn't always feel necessary. And then there were weird creatures such as a monster with boobs and a hand on its head with a light for a face. It felt like an attempt to recreate the Pyramid Head experience from Silent Hill. It was cool that it could step into the light, and you had to engage in some sneak tactics, but it also felt a bit out of place.

For all its positive elements, though, there were a few issues. For example, the controls felt a little sluggish. We never felt like we were moving at a decent pace. Even when we increased the sensitivity, it still didn't feel right. Then there was no proper sneak or crouch mechanics, which meant that stealth wasn't really an option when entering a room or getting past that weird monster we've just mentioned.

Then there was its repetitive nature. You spend a lot of your time going through drawers and cupboards looking for documents and keys, and that gets a bit boring at times, too. At times it felt more like Gone Home than a horror game and combined with the fact that the crosshair was difficult to move precisely, at times we found ourselves getting frustrated just trying to open drawers.

Another thing we noticed was that the lighting was way too dark. Sure, we know it's a game about the dark, but at times we were having to strain our eyes to see things. Increasing the gamma made the graphics look worse, and in certain areas, we couldn't find a pleasing balance. Also, we loathed the fact you need to shuffle into a room to turn on the lights to avoid death, something that highlighted the lack of stealth in a game that clearly needed it.

And if you do step too far and get yourself killed, then you're thrown back quite a long way, forcing you to repeat things over and over. This was painfully obvious during one long-winded puzzle section that we played through more than once, where you have to move eight heavy lion statues that slow your walking speed.

However, we did have some fun, and the story was intriguing (if not completely baffling). Those Who Remain had loads of potential but, sadly, it just missed the mark. While it tries to fill a hole that Silent Hill hasn't been able to fill in recent years, and although some people will love it, it just feels like there was quite a bit of room for improvement. The annoying lack of stealth mechanics, the repetitious opening and closing of drawers, and the frustrating checkpoint placement mean that Those Who Remain isn't able to capitalise on its many promising aspects.

Advertisements
Gamereactor UK
+
Good atmosphere with lots of scares, intriguing narrative.
-
Annoying controls, opening and closing endless drawers, dodgy facial animations, no stealth.
is our network score. What's yours? The network score is the average of every country's score

Those Who Remain gets retail-exclusive deluxe edition

Camel 101 is releasing a physical deluxe edition of Those Who Remain on PC and PlayStation 4.

We're facing the horrors of Those Who Remain on stream

Today's live stream will see us venture into the darkness in the new horror game Those Who Remain. 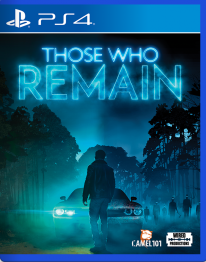