A fantasy-RPG that's looking to crossover between those eager for a meaty RPG to fill the void vacated by Mass Effect, and audiences energised by the intrigue and action seen in HBO's Game of Thrones, Witcher 2 is one of the most promising titles we've seen this year.

With the game out next week and our review due soon, here's everything you need to know to get yourself up to speed with 2012's latest blockbuster.

The Witcher franchise is based on the fantasy novel series of the same name by Polish writer Andrzej Sapkowski, following the adventures of monster hunter Geralt. Polish development studio CD Projekt created a tie-in PC game loosely based on those stories in 2007.

The Enhanced Edition subtitle refers to the fact that this is a reworking of the original release: The Witcher 2 launched on PC last May. Since then CD Projekt has been hard at work on an Xbox 360 version - the first time the series has hit console - which is due on retail shelves come April 17th.

On the same day, a patch that includes all the minor tweaks as well as new content exclusive to the Enhanced Edition will be made available for free download for the PC version. This follows the same template as the 2007 PC-only original, that saw an Enhanced Edition released the following year.

You play as Geralt, a monster hunter who's also a mutant. Consider him the super-hero of the fantasy world, given the template's similar: while he's persecuted by many factions, he's also granted superhuman strength, regeneration and mystical powers that help him earn his wage.

The central premise for the game involves you and a motley crew travelling across the world tracking a King-slayer and in doing so clearing Geralt's name of a crime he didn't commit.

Gameplay is third-person action adventure, the action-RPG offering an elaborate real-time combat system as you juggle swords, long-range weapons and magical abilities both offensive and defensive. There's multiple skill trees to customise your character and conversation branches to customise your experience - actions, or the lack thereof, factoring in at key scenes that'll have ramifications for the story further on.

It's a narratively-rich title with locations overflowing with NPCs to talk to, engage in side-quests with, or tackle in a variety of mini-games for enjoyable diversion. And even if it leans on the European-styling of fantasy tradition, it's a dark and bloody take on the genre with an 18 Rating that's well and truly earned, and twists stereotypes enough to make them feel fresh and engaging.

Given the game in its original form has already available on PC, you can read our final verdict on that release last May.

You can also read our first playthrough with the Xbox 360 version, which covers the game's opening hours, discusses the fixed control implementation, as well as an overview on the new missions later on in the game.

While a spoiler of sorts, for those of us coming to the Witcher 2 without the foreknowledge of the original's story, there's several good video primers released:

"What is Witcher?" details the origins and the powers of the Witcher.

"The Story Behind the Witcher" video gives an overview of the events of the first game and how they directly impact into the second.

The Combat Overview video showcases the fighting system that makes for the backbone of most of the game.

The Mini-Games demo shows the many diversions you'll find in the Witcher world.

The New Elements video gives you an idea of what CD Projekt has added to the game for the Enhanced Edition.

We've interviewed the studio numerous times on the project. At Gamescom last year they discuss the new features of the Xbox 360 version and the size issues with GRTV, and earlier this year discussed our hands-on with the game at an extended preview event.

The Xbox 360 version launches in the UK on April 17th, and comes in two variations for its retail release.

The standard "Enhanced Edition" comes packaged with a soundtrack CD, Quest Handbook and a World Map alongside the two-disc game and manual.

Amazon.co.uk announced that launch stock of the Edition will come signed by the development team while stocks last - you can pre-order that version here for £37.91.

The Dark Edition, which includes those extras of the Enhanced Edition, alongside stickers, a Making Of DVD, Witcher Medallion, and Artbook all packaged in a beautiful wolf's head box has sadly sold out for pre-orders. However it's always worth checking with your local retailer to see if they have copies in stock - or have a nose around eBay come launch (though don't be paying anything past £100).

If you're looking for more Witcher-related goodness, you can't go far wrong with the original novel that introduced the character - you can pick up The Last Wish from Amazon for just over a fiver.

For PC owners who are new to the franchise, you can pick up the Enhanced Edition of the original on Steam, which will only cost you £5.99.

The Witcher 2: Assassins of Kings will be reviewed on the site in the near future. 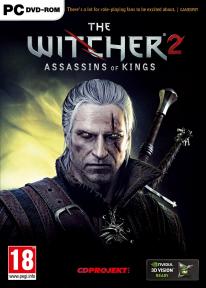