Great space adventures may be a dime a dozen, but Daedalic's space roguelike The Long Journey Home does some things a little differently. The premise is a bit similar to Star Trek Voyager, where Captain Janeway and her crew were sucked into a wormhole forcing them to start a very long journey back towards Earth from the unexplored Delta Quadrant. In this case mankind's first attempt at achieving faster than light travel results in an unexpectedly long jump and so you'll need to try and make your way back to Earth. Much like Captain Janeway you'll encounter various species along the way, and you'll need to try and mine, trade and negotiate your way to improving your ship in order to survive the perils of deep space. In fact, your ship starts in pristine conditions, although every now and then a system will fail or malfunction, forcing you to seek out costly repairs.

There are a few key choices that you need to make at the start of the game. First, you need to pick a crew out of ten candidates. Each has various uses and skills, but also comes with an item. Some give you an emergency hull repair (which can come in handy), or a bug spray (you'll need these too), while others take a bit more experimentation to figure out how to use properly (a potted plant for instance). Next, you pick your ship and your lander. There's not a ton of choice here, but you'll get a few variations in terms of cargo space, hull protection, and so on. You can also pick between a more forgiving explorer mode and a rogue mode, the former lets you rewind from a deadly mistake so you don't need to start over. Finally, you pick a seed, if you want to you can replay a seed from a previous game, which should give you a leg up in terms of knowing the routes between various galaxies better. Fewer jumps, fewer risks.

Most of The Long Journey Home is played out in real-time in 2D. Both when you're in control of your ship and your lander. It is highly skill-based and learning how to navigate star systems while using the least amount of fuel is going to take a little time. The key is to enter into orbit around planets at just the right speed and angle. Once in orbit, you can choose to deploy your lander. You'll get a cursory look at the risks of the mission and what you might gain. Controlling the lander is tricky and you'll more than likely crash it a few times as you get a hang of it. It's particularly difficult with mouse and keyboard controls, and perhaps this element of the game is a tad bit too unforgiving. We cursed out loud on more than one occasion.

This will result in injuries (crashing the lander, not the cursing) both to the craft and the pilot, so you'll want to be sure that it's worth the risk. Each planet typically offers one or two mining sites, or perhaps a point of interest that will trigger a short text adventure. It may end up with your pilot getting poisoned by some sort of critter or gaining a valuable artefact. The resources you mine for (you can also get these in asteroid fields) can either be consumed directly (metals will improve your hull, while other resources can be used for fuel or jump fuel) or sold off to merchants for credits. This is perhaps where the game strays from your typical video game structure as you'll always have issues to deal with as the ship continues to break down. It's kind of the point of the game, but to players who are used to progressing and getting stronger it may feel odd that you'll most likely just get weaker with each system you visit, patching things up as best you can.

One beautiful thing about The Long Journey Home is that as long as there is life, there is hope. You don't need to bring all four members of the crew back alive. In fact, given your limited capacity to heal crew members that's going to be hard. And even if you're drifting without fuel you can always fly near a star to pick up some "exotic matter", the resource used to power the jump drive, at the cost of some radiation damage, hopefully helping you to get to a system where you can rebuild and recover. That said, once you've taken a lot of damage and your economy is weak, it's really only a matter of time. Whether it is raiders who get you or your crew suffocates when you're out of fuel to power life support; there are simply many ways for the adventure to end.

You won't see all the game has to offer during any one run. The developer says you'll see maybe around 20 percent, but that's only if you make it through the entire journey. You'll only encounter a selection of the numerous alien species crafted for the game. These have been handcrafted along with their various missions, so knowing a species from an earlier run will be of great help. Some are really aggressive, others more benevolent. Some respond well to being praised, others are more easily offended. Our experience is that it's easier to make mistakes in these encounters than navigating them successfully on your first try, so knowledge is truly key here and you'll gain that as you play.

The game is accompanied by a beautiful score that really communicates space exploration. And visuals, while rather simplistic do a good job of conveying that retro sci-fi aesthetic that should appeal to fans of Star Trek and similar shows. The various alien species are interesting to get to know, and some are simply put fantastic (vine-creatures for instance). The UI is good at relaying information, but perhaps the screens and menus are a bit too cluttered. We'd also liked to have seen various stats on the crew members in order to make more informed decisions.

One area that is going to be a bit hit and miss with players is the mission structure and how you learn the behaviours of the alien species you encounter. Much of it is trial and error based, so you'll make mistakes and learn from them. Perhaps not for this particular playthrough, but looking ahead to future attempts. It makes for a rather odd experience, where you're kind of glad to see a mission repeated as you're able to make better choices the second time. However, as some mistakes are really costly, say as costly as seeing your ship get blown to bits, it can also be a bit frustrating. While this structure works and makes sense (it's likely how we'd need to approach interstellar diplomacy), it's also not the most satisfying gameplay mechanic. It's a bit like wandering into a minefield, and while you can make some educated guesses as to where not to step, it will likely end up messy for the first few tries.

The Long Journey Home is an ambitious game that covers a lot of ground, and so perhaps it's not surprising that it isn't perfect in all areas at launch. Hopefully, Daedalic will continue to tweak various aspects of the game, such as the interaction with aliens and the lander controls to make them a bit more rewarding and responsive. Adding more options to the start of the game (characters, crafts), as well as content in the shape of missions and alien species is hopefully also in the cards, even if the need isn't as immediate here. Overall, we enjoyed our time with The Long Journey Home, and we will return to it and launch new adventures, but we weren't quite as engrossed by as it thought we'd be when we first saw the game.

Gamereactor UK
+
Great concept, Interesting alien species, Tremendous depth, Requires both skill and strategy.
-
Can be frustrating at times (particularly the lander), Relies a bit too much on trial and error, Fairly basic in terms of graphical quality.
is our network score. What's yours? The network score is the average of every country's score

"The Long Journey Home is an ambitious game that covers a lot of ground..."

The PC, PS4, and Xbox title has made the FTL jump to a new console, tasking Switch players with surviving out in space.

The Long Journey Home gets 'Story Mode' to ease difficulty

The Long Journey Home lands on PC on May 30

We're taken on a galactic tour of The Long Journey Home

Complete crew reports in for The Long Journey Home 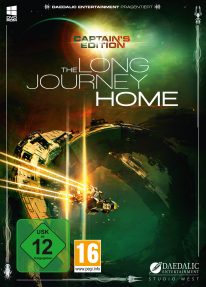