While the genre was established in the west it was taken further and evolved in the hands of the Japanese. Today we remember the likes of Chrono Trigger, Secret of Mana, Lufia, Breath of Fire and early Final Fantasy and Dragon Quest titles with teary eyes. Those were the glory days of Japanese role playing games, and for the most part this once flourishing genre has been relocated to the retro corner.

It's not necessarilly because of a downward trend in terms of quality. Dragon Quest IX: Guardian of Heaven, was a great game even if felt as though we'd played the game before. This conservative approach and sense of familiarity is both a curse and a blessing. This became very evident with Final Fantasy XIII, the most prominent Japanese RPG franchise, and one that had received a lot of criticism over its lack of evolution. It had a very slow start, but gained momentum after a couple of dozen of hours or so.

It was characterised by its linearity and a combat system that could almost be played by a blind man. In part it has to do with the reliance on turn based battles, but it also fell short in terms of storytelling where you can do so much more these days. For years the focus has been on presentation, while interactivity and player choice has been turned down to a minimum. And in the meantime games like The Witcher and Mass Effect have been born in the west.

While the genre is weakened it is far from dead, and there has been a number of great ideas in recent times. Often they haven't resulted in the best of experiences, and it is rare to see so many great ideas implemented as well as in Mistwalker's and Nintendo's The Last Story. Mistwalker, a studio founded by the creator of the Final Fantasy series, Hironobu Sakaguchi, wants to breath some fresh air into the genre with The Last Story.

It is true that The Last Story mimics Final Fantasy with regards to the title and logo. But the game itself doesn't come with a loaded backpack full of conventions, and more importantly it does not burden us with boring fights and outdrawn drama as it offers a significantly more compressed, varied and intense experience. It may seem confusing in the beginning, but the magic kicks in relatively quickly.

The main reason for this is the unusual way in which battles take place. The real time battles have a very distinct strategic component. Normal attacks are carried out without any interaction as long as we are close to an enemy. What we can influence is to trigger certain combinations or if we'd like to defend or dodge. The main character is called Zael, and he has a knack for attracting the attention of enemies. It's an essential component of the game, as mages need a few second to recite their spells so you need to keep the enemies busy. In addition to this, we control something called Focus, an ability that works a bit like a scope that let's us spot enemy weaknesses and points of interest in the environment.

The switch from moving around the map and the arena-like combat is seamless for the most part and well embedded in the story. The only contradiction is certain sports in the game where we can fight endless hordes of enemies. These spots are well suited for levelling up, and thus there is no need to wander about aimlessly looking for enemies.

In dungeons and battles the action heavy combat comes into its own. Our hero can duck into cover, and there's a useful over the shoulder perspective that let's us see what happens behind us. The cover system is not that important in direct combat, but can allow you to get the jump on the enemy with a surprise attack.

After battles we are faced with something else that's new. Our characters are revitalised with full bars of both health and mana. Another unusual thing is that each character has five lives. When these are used up the character cannot be brought back from unconsciousness for the remainder of the encounter. This means that in major battles with bosses, we might have to face the dreaded "Game Over" screen. This mostly happens if you don't figure out the correct approach to defeat the boss. Save points are frequent, however, so even if you happen to die it's not the end of the world.

The story is thoroughly enjoyable if somewhat predictable. It revolves around a group of mercenaries who came to the island of Lazulis to earn some money. It seems a little at odds with the design of the characters, as they appear young and unspoilt, not necessarily reflecting the harsh life they lead. It's seems a bit off, but it's nothing that detracts much from the experience and the characters come across as interesting and memorable.

Naturally we soon learn that this seemingly peaceful and lovely place is the scene of a conflict between the Kanan and the Gurg. The story is linear and filled with classic clichés we've come to expect such as romantic moments, tragedies and betrayals, but there is often a choice of how to reach a certain point in the story. The game also offers some of the best cutscenes we've experienced on the console, and they never feel superfluous or excessively long.

There has been an obvious attempt to create the sense of a more open world with the capital Lazulius City. There are lots of side quests and secrets to discover and the city impresses with its size and vibrancy. Other than this city, however, the game offers little in terms of freedom and exploration.

Naturally The Last Story cannot be compared with its high definition colleagues in terms of visuals, but given the hardware it looks outstanding. There are places where the limitations of the Wii are clear to see, and it's a shame given the beautiful design. As far as the soundtrack goes, Nobou Uematsu, has done an outstanding job - some of his best work to date.

Even if the game manages to do a lot of things very well, there are still a few areas that could have been better. In relative terms this is a rather short Japanese RPG as it takes less than 30 hours to play through on the first run and the focus is firmly on a beautiful told story, while there isn't a lot of challenge to be found in the combat.

As soon as you've grasped the combat system you will glide through most battles with ease, but regardless of this it's a game that belongs in every well stocked Wii collection.

The Last Story gets date

Screens from The Last Story 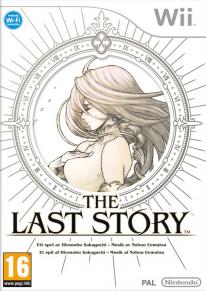 Star Ocean 3: Till the End of Time