In 2014, Bethesda published The Elder Scrolls Online and since then players have received additional stories, areas, systems and skills at regular intervals. In 2021, an expansion takes us into the region of Blackwood - an area that was first introduced in The Elder Scrolls IV: Oblivion. South of Cyrodiil shady people are getting involved in Daedric machinations. Political intrigues, a trip to the Deadlands, as well as an appearance from the Daedra prince Mehrunes Dagon are waiting for new and returning adventurers alike in The Elder Scrolls Online: Blackwood.

Elsweyr brought us back the age of dragons and Greymoor explored the history of the vampires while introducing the Black Reach to ZeniMax's MMO. With Blackwood, a political thriller with a Daedric mastermind is entering the stage. While we get help from Eveli Sharp-Arrow (the elf version of Sherlock Holmes) in uncovering any political complots, tutoring awaits in matters of Daedric culture from no other than Daedra Lyranth, which many players should already know from the base game. To make matters worse, the Dark Brotherhood also have their fingers in this tricky plot...

As always, the main quest has a few interesting twists to unravel and it sure is entertaining to accompany different characters like Lyranth. However, these detective stories can't grab me the same way real adventures like Elsweyr or Summerset do. Less subjective, but no less disappointing is the visual design of the new area. After we have explored Greymoor's Black Reach, which is one of the most beautiful regions of The Elder Scrolls Online thanks to its magnificent scenery and strong colours, the areas within Blackwood seems downright sobering. I would have liked spelunking deep into imposing, foggy swamps or dense forests, but instead the map blends into a single-looking mass of forests and bodies of water.

In contrast to that, the Daedric backdrops present themselves in all their appalling, lava-spewing splendour. Some of the new dungeons allow a glimpse into the Oblivion Plains of the Deadlands, which are not only home to Mehrunes Dagon himself, but also offer refugee to all sorts of terrifying Daedric creatures. The presentation is somewhat reminiscent to that of Doom Eternal (at least to an extent), with islands surrounded by lava and huge creatures fighting against each other in the background.

With each newly added region, we also receive a new world event. In line with the Daedra theme, this activity presents itself as a portal into the realms of Oblivion. These doors to another world are located within event areas and they lead players into small dungeons, where we have to deal with increasingly powerful enemy hordes. As a reward, there are plenty of experience points to get, as well as the chance of finding some valuable items.

ZeniMax presents its new content that, as in the previous chapters, adheres to a certain formula. The new world events offer a nice change of scenery and they challenge adventurers because of the increased level of difficulty, too. The new area contains another Trial for twelve players, as well as fresh equipment sets, collectibles and much more to get. However, the star of Blackwood is certainly the brand new companion system that was introduced with the latest chapter.

For the first time in the ZeniMax' MMO we have NPC companions with whom we can not only head into battle, but are allowed to hook up with them as well. There is currently only one female dark elf named Mirri Elandis and a man named Bastian Hallix to choose from. You can recruit the two as soon as you have completed their respective side quests and only one of them can be actively at your side at any given time (with PvP zones being the sole exception).

The Rapport tab is where we can see our current relationship status, or changing the equipment and the active skills of our companion. Collectibles such as costumes or mounts can also be used by your new best friend. Thanks to the classless design, these two characters can be used as a tank, DPS or as a healer and thus they should meet the preferences of every player. For solo players it is particularly convenient that they can take one more character into public dungeons, because due to the increased difficulty we'll find there, these challenges can usually only be completed in groups. If you are not a part of a guild and just like to look into the game irregularly, you can now look forward to getting some real advantages with the new companions.

I was positively surprised by the depth that the companions bring into the game outside of the fighting. Both Bastian and Mirri have certain likes and dislikes that can affect our relationship to them. Mirri Elendis takes pleasure in venturing into Daedric dungeons with players, digging up antiques or reading a good book. But anyone who kills friendly NPCs or loots treasure chests when Bastian is in the group will quickly notice a negative change in status. Players who push their limits and completely negate the relationship bar must even expect their companion to suddenly run away on its own, which will lead to her or him not being available for a certain period of time. A positive relationship is rewarded with further companion quests, which in turn reveal more about the background story of the respective companion.

When Greymoor was released, I praised ZeniMax's efforts to make the game more palatable to casual gamers and fans of immersive elements. This time, the companion system might be the most successful implementation of the latest DLC, since it deepens the experience of The Elder Scrolls Online even more. Having a wider range of companions is desirable, and hopefully one of the big concerns that the developers will be dealing with in the future. Fans already have to live with a narrative divide that opens up the story of the "one and only true saviour" and the hundreds of thousands of gamers who are doing their job better than most of us do. A large number of Mirri and Bastian clones do not necessarily improve this situation. Also, especially with players who have several characters, this feature is currently a bit repetitive.

For me, The Elder Scrolls Online: Blackwood turns out to be a mixed package overall. The companion system is perhaps the best expansion of the game so far, whereas the Blackwood area could hardly grab me at all. In the end, as always, it depends on the interests of every The Elder Scrolls online player, so it's up to you to decide whether Blackwood has something exciting in store or should rather be skipped. Daedric supporters and all those fans who have been pleading Bethesda for a companion system for years will surely have fun with the new contents. For my part, after two very dark chapters, I am now ready to dive into more serene realms. Who knows, now that Bethesda has finally pursued the desire for a companion system, players may finally receive the long-awaited class of bards after all?

Gamereactor UK
+
Long-awaited companion system impresses with more depth than expected. Thanks to those companions solo players get new possibilities. The new world events are unusual and nicer to look at.
-
Depending on personal preference, the main story might not be one of the strongest innovations within the game's DLC series. The new area of Blackwood is a bit monotonous. Only two companions can hardly be called a choice.
is our network score. What's yours? The network score is the average of every country's score 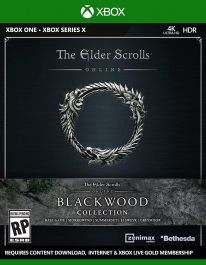