Fast Travel Games is a small studio focused solely on VR games and it is known for Apex Construct and Budget Cuts 2: Mission Insolvency. This time, however, the studio is moving away from the realm of traditional action games, instead, it is leaning into the world of family-friendly gaming. The Curious Tale of the Stolen Pets reminded us of Allumette, a short, virtual puppet show of sorts that was released for PlayStation VR early on in the hardware's lifecycle. The Curious Tale of the Stolen Pets shares its perspective and its stylised design but reminded us more of the toys that fascinated us as children.

The strange story that the title of the game suggests is, in reality, a pretty ordinary tale, and as friends of clarity, we'd like to clear up the fact that the animals in question aren't truly stolen but more so they're lost. We'd also like to state our opinion that calling a Tyrannosaurus Rex and a seagull "pets" - they're not, but fine, we'll run with it. The game starts out with your fictional grandfather telling you about how you and your sister used to have so much fun when you made up various games and from the way he tells you about it, it's clear that you've since lost contact with her. This is what the game's all about; you'll take a nostalgic trip down someone else's memory lane.

In practice, the game works like this: you'll twist and turn the little diorama that's presented to you to find hidden coins and figure out how to locate all of the lost animals. You can play the game with two Move controllers to have both hands at the ready, but you can also play it just as well with a lone Dualshock controller. Sometimes all you have to do is point the cursor in the right direction, but more often than not, you have to figure out how to manoeuvre through a small puzzle, for example, like when you need to fill a cup of tea or get a train to arrive at a certain location. It reminded us a bit of Ghost Giant, but simpler. It's also rather short. We finished the game's five levels in about an hour.

The game shines thanks to its presentation. The small characters that walk around are incredibly charming and all of the animals you find have different sounds and personalities, which adds to the overall atmosphere and the toy-like feel. Many VR games set you loose in grand, open environments but we find that the immersion of a smaller setting is hard to beat. Take Tumble VR, Job Simulator or Astro Bot Rescue Mission, for example. The game looks great, with exceptional shading, and you'll rotate the tiny world in front of you as opposed to the opposite. Even though it works well to play the game sitting down, we noticed that at times it was a better idea to stand and look down on the little world to find secrets or solutions to the puzzles.

The downside of the game, for us at least, was the fact that we clearly weren't even close to its intended audience as the difficulty takes the minds of children into account, and we'll say that younger children would probably be fascinated throughout. The framing of being an adult looking back into the realm of nostalgic memories, however, could lessen the experience for that same audience somewhat. It's hard to pinpoint who the game is for, even though it's charming and competently developed. For a newcomer to the VR scene, it's a great game to get started with since you don't have to move around in this low-intensity experience, but those who have dabbled in VR before would do better picking up Superhot, Beat Saber or Job Simulator instead.

Gamereactor UK
+
Nice design, great atmosphere, lovely for beginner gamers
-
Very short, simple mechanics
is our network score. What's yours? The network score is the average of every country's score

The Curious Tale of the Stolen Pets

REVIEW. Written by Mikael Sundberg on the 3rd of January 2020 at 12

"For a newcomer to the VR scene, it's a great game to get started with."

We gave it a whirl in Cologne, seeing what Fast Travel Games is offering with this mystery.

The Curious Tale of the Stolen Pets 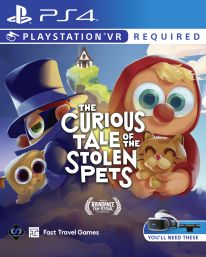