The sequel however comes will all the trimmings of a 'proper' entry.

You're looking at a full compliment of modes both online and off, galleries, customisation options and ending movies that suggest while Tag 2's been treated with all the seriousness of a full scale entry, the studio's finding the funny in the fifty plus characters some of who we've been familiar with for seventeen years now (and most whose biographies read as bizarrely as a soap opera casts).

There's an injection of the humour and friendly accessibility that marked Street Fighter X Tekken's training mode in Tag 2's extensive Fight Lab, a great primer for newcomers and much needed for those who haven't ventured into the Iron Fist Tournament much or at all in those past seventeen years. It's obvious that Katsuhiro Harada and Yoshinori Ono's collaborations have borne the need to welcome fresh faces in need of a punch into Namco's franchise.

Fight Lab runs through the basics (there's an entire lesson dedicated just to using the stick/D-Pad to avoid attacks and bombs) to introducing the tag system that'll dominate higher end techniques with a light humour that means you don't feel the fool when you get techniques wrong.

However, given some of the later stages offer multiple fights to practice different techniques, it'd have been good to have a mini-checkpoint system instead of being thrown back to the start. This is mentioned primarily for Xbox 360 owners, who'll once more feel shafted due to the standard controller not cutting the mustard on the fighting circuit: simple inputs will become an issue and will test the patience. And the durability of the controller being bounced off the floor (memo: buy a fighting pad or joystick).

However, it'll give you a better understanding of the systems in play, and coupled with the usual practice mode gives you the tools to introducing you to the game.

Of course, even with training and a graded profile that promotes you through the level ranks, prepare to get pasted online. As with every fighting game before it, this is where the real lessons are taught. A Replay Theatre lets you watch matches with any character of your choice, and its a good way to see the more flamboyant and pro players work their magic - and a basis to start emulating their skills through study.

It's been twelve years since the Tag feature was first introduced to the Tekken series, and while its the core to this sequel it doesn't dominate the experience - there's options to fight solo if you so wish, keeping things classic - while the tag team theatrics are far from the pyrotechnics witnessed in Capcom's Vs or X series, instead treated as extending combo chains (as with X, once one character falls its round over) by tagging in the other character during launchers and such to juggle opponents in the air for as long as possible.

This extra Tag command (assigned to the shoulder button) will switch between your chosen team-mates, but the actual usefulness by way of dual attacks or combined throws comes by inputing it between the normal combo beats or jointly with traditional moves. It means that as ever, perfecting timing and committing elongated combination strikes to memory is key to utilising the inclusion successfully.

So it's not as flashy, nor - thankfully - as complex as other tag systems. It sits more as a small extension to the preexisting mechanics. So no feathers ruffled for those not wanting too major a change to proceedings (of course, there's a flip-side to that argument for those wanting extensive tinkering).

And that extension's built into one of the most comprehensive fighters around. You don't near the two decade mark in the industry if you're just a flash in the pan (though Tekken has, and always will be, very flashy indeed). With a roster of over sixty characters and possible tag team combinations that - well, let's just say a lot - there's going to be balance issues somewhere in there, but on the whole the system's solid as a rock (or Iron Fist), and continues to build on what's went before.

It's entering the console fighting arena three years since Tekken 6's release. However, it's also joining a packed year for the fighting genre: eight months after Soul Calibur V, seven months after Street Fighter X Tekken and only a few weeks before Dead or Alive 5 arrives.

But the disciplines are different. The odd fighting style may crossover between titles, and fists and kicks may fly with the same speed and fury, but the execution of decking another human being is tournaments apart. It's all about the feel and what's comfortable to you.

Tekken Tag Tournament 2's built in everything you'd expect or need from a fighting title needing to remain contemporary, a step up for new players, plenty of gameplay options for veterans, and plenty of lavish fan-service for lovers of the series.

For the latter two groups, a purchase then is pretty much guaranteed. For the first group - and given the volume of current fighting titles - both Street Fighter X Tekken and this offer the best introduction to the fraternity. The pertinent and personal question you've got to ask yourself is this then: which control scheme feels most satisfying in punching someone's lights out?

HQ
Gamereactor UK
+
+ Huge range of modes + Fight Lab good training for learning the ropes. + Massive character roster.
-
- Very similar to what's went before.
is our network score. What's yours? The network score is the average of every country's score 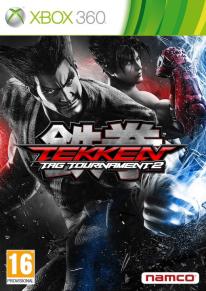