The fighting genre on consoles has gone through something of a renaissance on consoles these past 18 months starting with Soul Calibur IV and continuing on with Street Fighter IV and King of Fighters XII, Blazblue and now Tekken 6. It has actually been almost half a decade since we got Tekken 5 on Playstation 2 (early 2005), so it's about time to enter the King of Iron Fist Tournament once again.

So what has Namco Bandai been up to in the meantime? It's not immediately apparent when you turn on Tekken 6 and is greeted by something that looks old and feels like Tekken 5: Dark Resurrection. I'm not saying it's a bad thing, since we've been playing that game since it was released.

As usual I'm of the opinion that fighting games should be played against human opposition. Namco Bandai are among the developers who put both time and effort into adding game modes that provide entertainment for those who lacks friends to play or an extra controller. Apart from the Scenario Campaign (I will return to it later), there are Arcade, Ghost Battles, Survival, Time Trial and Training modes.

These are mostly self explanatory, but Ghost Battles has become a new favourite where you face one opponent after another with higher ranking, but you get to choose your opponent after each round. It is nice to be able to avoid the fighters you dislike while the virtual cash keeps coming in.

The easiest way to make money is in the Scenario Campaign mode (similar to Tekken Force). An alternative way to play Tekken. Much like an old school beat 'em up you walk and brawl your way through levels. But I might just tell you straight away that the Scenario Campaign stinks. Stiff and unresponsive controls, where no gravitational laws seem to apply. It's like the polygons are filled with helium.

The fights are also very confused and focusing on one enemy does not really work they way it's supposed to. If you happen to die, or a weird but frequent bug strikes, you are going to have to start all over again, no second chances even in boss fights. The upside is that this mode gives you plenty of virtual dollars to spend on styling your fighters, and that is probably the only reason anyone would play this more than a few minutes.

One of the greatest strengths of the series is how easy it is to pick up and play. With each face button mapped to an arm or a leg beginners will quickly get into it. However, this does not mean that button mashing is particularly effective. Tekken 6 sports an extremely deep system that grows on you as you play. There are lots of possibilities for insane juggles and mind games to force your opponents hand. There are also lots of opportunities for counters and the defensive part of the game is impressive.

One of the big innovations in Tekken 6 is something they call Rage. As your energy bar reaches low levels your adrenaline kicks in and you can dish out more damage. A rubber band mechanic if you will that allows for comebacks, but it seldom changes the outcome of a fight.

Tekken 6 has a nice flow to it, high tempo and mindblowing animations. There is never a sense of being in control regardless of your personal skill level. Judging the balance of a fighting game that has just been released is like walking out onto a minefield blindfolded, drunk on cheap liquor and your heaviest boots. The best characters vary through the years and in the best fighting games an almost unused character can suddenly rise up to become a favoured fighter thanks to recently unearthed super moves.

There are six new characters since Tekken: Dark Resurrection. The fat American Bob, gigolo Miguel, androgynous Leo and the weird Zafina. Two new characters were added to Tekken 6 with the updated Bloodline Rebellion (that the console version is based on), robot Alisa and Swede Lars. These characters are all solid and will at least at an amateur level be regarded as very competitive.

Fat fighter Bob has a tendency to frustrate players who aren't used to him being something as unusual as a quick fat man. He also sports some good attacks that can easily be put to good use at a lower level. He is strong, but not as strong as Lars, who I think was created for the next Dragon Ball game, but somehow got mixed up with the Tekken cast. That would explain his hair style. Not very Swedish...

The most entertaining new character is Alisa. She turn her own head into a bomb and throw it at the opponent, turn her arm into a chainsaw and she also sports a set of wings. Hey, it's a video game, so why not go all the way?

If you have played last year's Soul Calibur IV from Namco Bandai, you won't be surprised by the technical side of the game. Even if Soul Calibur IV can't be said to offer extraordinary visuals, it is still a beautiful game. Tekken 6 has been around in Japanese arcades for just as long, and no major efforts have been made to update the graphics. This makes the game look a bit aged, with lacklustre faces and slightly underwhelming backdrops. Sure there are things that you can break, and stuff go on in the background, but it is the wonderful animations, the framerate and the design that saves the graphics score.

And despite the old visuals there is a lot of loading in Tekken 6. It can be helped somewhat by installing the game on the hard drive (Xbox 360), but both consoles have load times that are much longer than the norm. For those who love to compare console versions of a game I can say that the games are practically identical on Playstation 3 and Xbox 360. The Playstation 3 version has better anti-aliasing, while the Xbox 360 is a little crisper. But these differences are hardly worth mentioning.

An online mode is a necessity for any fighting game today and Tekken 6 is no exception. The real experts will claim that fighting on the highest level is impossible online, but for most people it works well enough to be highly enjoyable. You can play both ranked and unranked matches so there should be suitable competition for everyone.

Don't be fooled by the somewhat old surface, Tekken 6 is a fighting game that delivers what it promises for seasoned veterans and beginners alike. It's not a new masterpiece or even a milestone in the Tekken series, but it is still very good fighting game.

A kangaroo fighting a panda? Anything is possible in Tekken and Jonas Mäki has gone toe-to-toe with the latest offering...

If you want to revisit Tekken before 7, you can now do so.

first of a six month season

Fighting on the floor of TGS

If you are serious about fighting... 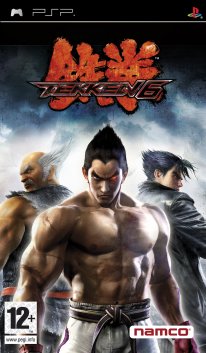