Tatsunoko vs. Capcom: Ultimate All-Stars is a fighting game with a 2D retro feel. Essentially the same game we played and fell in love with almost two decades ago. The graphics are of course somewhat sharper and special attacks much more intense and insane, but in essence it is the same game. Punch and kick and launch obscenely large energy beams against your opponent until he or she concedes and crumbles to the ground. There can only be one. Or two to be more exact, since each player has two fights to switch between. The tempo is high and there is variation between the characters too.

Capcom's "Vs." Series has been around for quite some time with the Marvel vs. Capcom the hottest license they own. They have also had their featured fighters as characters on SNK vs. Capcom. They have now shifted their focus to a Japanese company renowned for churning out anime series.

The fact the game has reached our shores is a minor miracle, since most Westerners aren't aware of Tatsunoko's productions. Against all odds we'll be able to square up against each other dressed in figure hugging tights as massive attacks, missiles and laser beams fill the screen.

I do have to come clean about the game. Before playing Tatsunoko vs Capcom: Ultimate All-Stars, I had never heard of it. To be fair, unless you follow Japanese comics religiously, you wouldn't have heard of it either. Tatsunoko has been producing animated television shows since the mid-sixties - meaning there are over forty years of animated goodness that I am yet to see. Therefore, my failing to recognize characters such as Ken the Eagle, Jun the Swan, or my new favourite robot Gold Lightan is perfectly understandable.

It's a weird feeling but the first time you meet the fighters, you're hit with pangs of nostalgia. The character and costume designs also give off unmistakable whiffs of the developers trying to lampoon Japanese anime culture. It feels like I'm playing a game the brains behind South Park would parody if Matt and Trey dedicated a segment of their show to obscure Japanese fighting games.

Since a sizeable percentage of the fighters are unknown to Western audiences and for a time, a release on these shores was uncertain, one can safely assume that Tatsunoko vs. Capcom was developed with the Asian market in mind. It therefore feels a tad bitchy of me to whine about the licenses failing to appeal to me. While I would rather play "Capcom vs. anything that I know" the game grabs you and is a lot of fun.

The recognition factor of Capcom's fighters is in stark contrast to the reinvention of faces that Tatsunoko throws up. Ryu, Chun-Li and Alex represent the Street Fighter series. But Capcom has also thrown in more unexpected characters. Apart from Roll, Zero and Megaman Volnutt from the different Megaman game series, there are also surprises like Viewtiful Joe and Dead Rising's Frank West. Old Capcom Players can also enjoy the return of the vamp queen Morrigan, who makes an appearance for the first time since 1994, and also receives a graphical facelift. All playable characters are drawn in three dimensions, but viewed as a side scroller gives the game an old school feel - in a good way.

The game is frenetic and hectic - as it should be. It is also a tad too simple - Especially if you play with the Wiimote, which I would not recommend, nor the Gamecube controller which doesn't work particularly well. With a Classic Controller you get more out of the game. If you are lucky enough to own an arcade stick for the Wii, it should of course be used.

The biggest change in terms of gameplay is the use of the same buttons for punches and kicks. There are three attack buttons with different speeds and levels of effectiveness. A fourth button is used to switch between two fighters. It is confusing at first, but you soon get the hang of it.

If you have a Wii and got a need for some two-dimensional fighting, then Tatsunoko vs. Capcom: Ultimate All-Stars is an essential purchase. If you however happen to be snowed under by Japanese comics, you may be best advised to save your money. The game is sure to dominate a lot of my gaming evenings in 2010. Tatsunoko vs. Capcom: Ultimate All-Stars can be appreciated by button mashing aficionados as well as hardcore fans.

Tatsunoko vs. Capcom: Ultimate All-Stars doesn't offer delicate subtleties - but I couldn't care less about that, when with two linked up special attacks, I'm able to unleash a combo that does 15 083 BILLION DAMAGE!

Gamereactor UK
+
Superb special attacks, high tempo, intuitive controls, great graphics
-
Tatsunoko who?
is our network score. What's yours? The network score is the average of every country's score

It's been a while since we got a new "Vs." title from Capcom. Insane combo time! 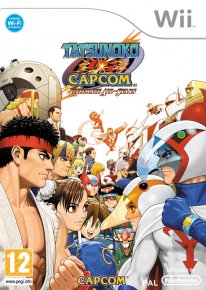