Super Mario All-Stars: 25th Anniversary Edition for Wii is probably one of the hardest games to grade that I've ever encountered. How can you put anything except a full score on a product that includes both Super Mario Bros and Super Mario Bros 3 - innovative and perfect platform games that are still incredibly fun to play? There are a couple of reasons why not.

The first reason Nintendo get to explain themselves, on the back of the pretty box with the fancy 25-year anniversary logo. "The content of this game is the same as the original SNES game." And that's exactly right. Not only when it comes to the four games included; Super Mario 1, 2 and 3 and the "real" number 2, Lost Levels. But also with the 50 hz-mode, the black bars at the corners of the screen and that you get tips for how to play with the Super Nintendo-controller. This is a re-release of a re-release, and I find no extra polish or any other proof that I'm playing on a Wii.

Of course, nostalgia is the big hook here. But even then I can feel like Nintendo missed the mark a bit. I get much more nostalgia from playing the originals, not from playing NES-games with SNES-graphics and music. Just like I can't view the CGI-ruined Star Wars trilogy as the real deal, something feels off when the Super Nintendo-version of the "pling" when Mario picks up a coin plays.

How about the extra material? Well, you get a 30 page booklet called "Super Mario History 1985-2010", with some pictures and sketches from the development stages of the various Mario-games. Shigeru Miyamoto, Koji Kondo and Takashi Tezuka have written comments for every game, but since those comments are really short they kind of fall flat.

You also get a CD with the soundtrack from the games, all the way from the blip-blop of Super Mario Bros to the bombastic strings from Super Mario Galaxy 2. This could have been brilliant, but the offering is really thin and half of the 20 tracks are 5-second clips with classic sound effects. The remaining 10 are the main themes from the different games.

With it lower price point, the optimist might see this as a cheap Wii-game. I see it as a Virtual Console-game that is three times as expensive. Mario deserves something better to celebrate his 25th anniversary than a quickly thrown together SNES-port.

Now I've spent a large part of this review to say bad things about this re-release and it's about time to motivate the 8/10 I've actually given it. The simple truth is that 2D platforming is still very much relevant to gaming, and despite Nintendo's own competitors (New Super Marios Wii, Donkey Kong Country Returns), these old relics are still amazing. It's still just as fun to look for warp zones and beat up Lakity, or to ride on Super Mario Bros 2's flying carpets. The air ships, Kuribo's shoe and the pipe world in the third game still cheer me up. Lost Levels is a true history lesson and a huge challenge and if you manage to complete it, you surely have something to put on your gamer resume.

The controls are tight (you can use the Wiimote, a Gamecube-controller or the Classic Controller) and being able to save while you play is practical. The music is, of course, amazing. The lasting appeal of four games, one of them being incredibly hard, is high. And since not all Wii-players are connected to the Internet, this pack has its place as an alternative to Virtual Console.

You can't escape the fact that despite certain flaws, Super Mario All-Stars: 25th Anniversary Edition is a beautiful and entertaining game. There's really nothing else to do than to play a couple of more levels and say "happy birthday, Mario!"

Gamereactor UK
+
Filled with gaming history, wonderful platform levels, amazing music, a lot of charm
-
Nothing more than a simple SNES-port, relatively expensive, would have deserved more extras
is our network score. What's yours? The network score is the average of every country's score

REVIEW. Written by Petter Mårtensson on the 9th of December 2010 at 10

Super Mario Bros turns 25 this year, and Nintendo celebrate this fact with a re-release of a re-release. Super Mario All-Stars: 25th Anniversary Edition is filled with classic platform games.

Luxury edition for the happy Japanese 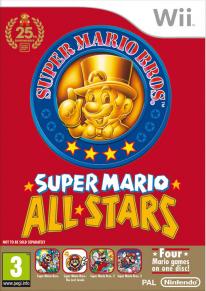