My first encounter with Subnautica was to stand on my craft and look out at a wreck from a crash-landed spaceship. The sea stretched in all directions and glistened nicely in the sun. You were alone standing on a small rescue capsule and would now try to survive. The method for this was not to build a raft as in other games, but to dive into the water and explore what lurked below. What I was met by when the first game was released in 2018 was a colourful and captivating game world with incredible sound design. It is still one of my favourite game moments to dive down and witness what Unknown Worlds had created. The design and music were above expectations and the survival aspect worked almost perfectly for its purpose. Water, food and new equipment via exploration was a balancing act that propelled the experience forward.

There are few games that can make me truly love the world itself in the way that Subnautica succeeded. So how does the long-awaited sequel Subnautica: Below Zero stand against its predecessor and the competition. The simple answer is really well. In this new adventure, we play as Robin Ayou, a xenobiologist who searches for his sister who has disappeared without a trace.

The game begins quite dramatically in a way that I think you should experience for yourself. Once down on the icy planet, your journey begins of which quite a bit is also spent a bit on land. In the predecessor, the land-based areas were small and rare. To cope with this, there are some new vehicles such as a hovercraft, objects that keep away creatures that want to eat you and spy penguins. To quote Qui-Gon Jinn: "there's always a bigger fish". The fish can get quite big here and there are even some of the horror the game brings with it. Some land-based carnivores are also quite large and uncomfortable to run away from.

The spy penguins, on the other hand, are incredibly fun to use, and there are creatures that you can not approach without becoming food in other ways. To create a suit that protects against the cold, for example, you need to snatch fur from an angry wolf-like beast with the robot. You then have to stand behind a rock some distance away, drive a small penguin robot up to the creature and start tugging its fur discreetly. You can also blend in with your penguin drone with the live penguins. When I use the word penguin, it should be used sparingly as their mouths are full of fangs and they are visually different from their own counterparts. However, it was fun to pick up and throw away their little lives. I do not know why I did it, but there is something iconic about throwing penguins in video games.

Once you have let go of how beautiful the game world is and you start thinking about surviving, there are some new game mechanical elements. It is no longer just water, oxygen and food you need but must also take into account the cold. The cold is not very relevant below the water surface, but is a problem when you go ashore. Then there are both hot drinks, food and equipment you can create to cope with the weather. It can vary enormously from hail to rain meteorites. My experience is that the cold is used too little underwater and is therefore not integrated into upgrades on vehicles. It would have been interesting to have to think a little about where and how we move even below the water surface, as it's like two games in one that do not work together.

I can not complain about the new stuff. They add something new and exciting that often breaks up the monotony. I also believe that the new story takes up enough space and allows for free exploration. The environment is varied and engaging to explore. I do not want to reveal too much, so that you who want to experience all this have an opportunity. But the journey will take you all over the gaming world, whether you prioritise the story or purely exploratory. For that, you need a place to store your items. You have a laptop, in it you can, just like in the previous title, change what you have with you, read about monsters and plants you have scanned. It is a system that works well here too and you can via the menu let the game pause or continue when you are in there. You can also read news that connects both games with each other.

As a game, Below Zero is a shorter adventure than its predecessor. It was intended as an expansion but is today an independent title. If you have played other games in the genre, you will recognise yourself. The big difference is that you do not kill in the same way. Exploration is more important than most and the game is driven by a clear story. It is not quite as wide as its predecessor in terms of surface, but instead a little more vertical. The different environments are more stacked on top of each other. I think it's better, even if you lose the fear of having to travel far from the base. For those of you who played the previous game, you probably remember the feeling when you were several kilometres away in the unknown. If you get far from your base in the sequel, the sea truck serves as the equivalent of the submarine. It's your mobile headquarters, with everything you need. You can also load your robot suit on one of the carts.

Depending on what you focus on, the game can take anywhere between 12-40 hours. On the other hand, there is a lot of exploration, base construction and other things that will surely extend the playing time for many. It had few bugs during my time with it and I experienced this as more compliant than its predecessor. If you feel called to take a deep dive into a new underwater adventure this year, this is the best you can get for your money. It is familiar, a little tighter, with interesting land-based elements and a lot of swimming. The story is not the highlight here, although the game wants to push you to follow it. Instead, it's those first times you dive below the surface and are captivated by a fantastically rare but adorable underwater world covered in snow and glaciers.

Gamereactor UK
+
Beautiful game world. Great design. Wonderful atmosphere. Superb music. Great variety.
-
A bit too short. The story is a bit forgettable.
is our network score. What's yours? The network score is the average of every country's score 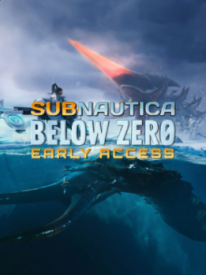