You'd feel the need to grumble a bit louder if the remakes dominating the 3DS release schedule weren't so damn good.

Star Fox is an oddity in Nintendo's catalogue, riffing as it does on popular culture - epic space battles of Star Wars, inter-squadron banter of Top Gun minus the homoerotic overtones - and applying a side order of Score Attack mechanics - common of the genre but not of a Nintendo title - to guarantee longevity over a campaign that can be aced in an hour. Stacked alongside a library of originals, Star Fox was paradoxically unique.

Score Attack mode is the real meat of Star Fox, requiring you to memorise attack patterns to earn combo hits, and opening up as separate Leaderboard-pursuing mode once you've cracked into the main game to let you replay those stages already completed. It's in way a chore, though you need lightning reflexes and memory skills come later levels.

But campaign isn't dead in the water come your initial clock through, offering a neat incentive that demands repeated plays.

There's no selectable difficulty from the start in the game. The map across the galaxy is multi-branched, your route charted by your success or failures in each stage. These aren't clumsily signposted but form natural challenges within each stage's objectives; derail a train by activating line switches or face a gigantic boss that comes folding out of the carriage like a winged transformer. Avoid being spotted by enemy searchlights in a night time attack, down a mothership before it annihilates an allied base...it feels entirely organic to the story and surprise benefits in criss-crossing certain routes mean there's plenty of replay value to make sure you've seen everything the game has to offer.

Despite its fourteen years of age, the game seems custom-built for the 3DS experience. Star Fox's rapid-fire assault against waves of enemies and huge bosses even more enjoyable due to the new depth of field. Like Zelda there's been graphical nips and tucks too; Corneria City is no longer quite the bland eyesore and boasts General Pepper billboards, while the multi-ship dogfight above Katina's allied base is against the backdrop of an impressive blood red sunset.

It's the space battles that this really shines though; try out the suicide run through Venom's orbital defences in Area 6 with the 3D Slider on full and you'll experience a space battle that outperforms the entirety of Star Wars Episodes I - III for thrills.

Where the sheen comes off is in some of the voice work and later all-range battles. The first may be the conditioning of our advantaging age, but even back in '97 Star Fox's odder comrades - namely wingman Peppy and ever-helpful Rob64 - clash with what's a pretty epic tale of a galaxy at war due to their jauntiness and mock-Transformer tone. It's an incredibly small and churlish niggle. The second issue, not so much.

Star Fox has two modes of gameplay; the majority is the straight corridor shooter, but occasionally you fly into an arena-shaped area for "all-range" battles. Intuitive mechanics, pressing Up and X or A to perform loop-de-loops or 180s, make the transition both easy and enjoyable to play.

However, the last two boss battles, one against recurring enemy squadron Star Wolf, if you've went the hard route, and main villain Andross are frustrating and boring; due to both sticking religiously to your tail the result is the unfortunate necessity of performing endless loops to get them even momentarily in your sights to attack. Less dogfight, more dog shit, and it feels cheap after the solid gameplay that's was on offer up to then.

Bu where AI pilot like Jesus in a F-14, playing against friends in the mode will be a more enjoyable experience due to the non-programmable element of human error. The game offers a multiplayer variant of the "all-range" battles, split between Survival, Points or Time Battles. Unfortunately our time with the game didn't allow for a test of this new addition to the classic, so we'll be looking at this in the near future.

In all it's a welcome return of a classic, and given there's no hint Nintendo will return to the Lylat system in the near future, it's a revisiting that should be treasured all the more. Time hasn't aged the gameplay, and those issues that nostalgia seems to have forgotten aren't game-breaking. It'd be a strong contender for your handheld budget this month, even if there was anything else coming out right now that'd offer a challenge.

Advertisements
Gamereactor UK
+
Puts the 3D to good use, Score Attack offers plenty of replay value, MP mode is a welcome addition.
-
Last few boss fights may annoy, Score Attack modes limits you to levels you've played.
is our network score. What's yours? The network score is the average of every country's score

REVIEW. Written by Gillen McAllister on the 6th of September 2011 at 16

"It's an oddity in Nintendo's catalogue, riffing as it does on popular culture - Star Wars, Top Gun - while applying a large side order of Score Attack mechanics."

"We idly wonder whether Nintendo had its hands on a DeLorean back in '97 - the game's rammed with the type of 3D money shots that Hollywood of today loves."

And some new screenshots as well 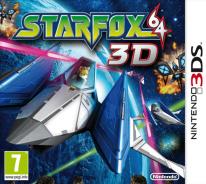