Spore is not about evolution.

It's weird, seeing as evolution is one of the things that was supposed to be really interesting with Spore, but I find myself pointing that out every time someone asks me about the game. Evolution, to me, is when nature dictates the way a creature evolves. Spore, on the other hand, lets you play a benevolent creator that can change the way his favored creations act and how they get to the top of the food chain at whim. Nature has nothing to do with it, it's all up to you.

The game does follow five evolutionary steps, four of them preludes to the point where your creation leaves the confines of its home planet and reach for the stars. They are preludes in many ways - not only do they give you ample time to define what your creature should look like, what kind of habitats it should build and if it should wage war through arms, economy or religion, but they all feel like they miss something that the space stage doesn't. It's been said before, and it is a view that has also been receiving some criticism from other writers, but I don't feel like the early stages are complicated enough to get my full attention.

For example, the cell stage where the game begins is more or less a bore, where you just swim around and either eat or are eaten. Death means nothing, failure at this point does not doom you or your creature to certain extinction. You die, you are born again, the whole cycle begins anew until you get enough points to grow legs and are able to crawl up on land. There's no way you can fail, evolution will never stop you dead in your tracks, there's no survival of the fittest. You can be a meat eater, a herbivore or both at the same time and it's all subject to change whenever you feel like it. Your choices are pointless, except giving you certain abilities in the next stage - abilities which are, most of the time, easily forgotten.

Perhaps this is where Spore fails the most. There is no cause and effect. Your choices do not matter, because your whole species can change whenever you want it to. It is not until you reach the tribal face where your creature's shape gets set in stone, but at that time it doesn't really matter if you were a herbivore or a carnivore to begin with. At times this can make Spore a quite confusing experience, and what can be seen as a lack of overall focus can all too easily steal the show from what is ultimately a great game.

Don't get me wrong, Spore is a great game. It's greatest failure is not being to live up to its own hype since it's actually not the game a lot of people made it out to be. It's a game for the creative player, the player who wants to shape his own protagonist. It's not a game for the evolutionary scientist (we got Sim Earth for that), it's not the game for the hardcore strategist (go play Europa Universalis instead). The space stage is not catered for fans of Elite or the X-series. Spore is a cute game with a highly advanced backbone, made for more casual gamers.

Which also means that Spore is not made for games journalists, people like me who no longer can play a game without being extremely critical. It is far from a perfect experience, but the more I play it the more I am sucked into it. It can become paradoxical at times, when I don't want to bother with the early stages anymore because they bore me but at the same time I can't jump straight into the space stage because I am unable to grow a personal attachment to my creatures without the first four stages...but I know, instinctively, that "ordinary" gamers, people who don't analyze games too much, are probably having a lot more fun than I am.

No, Spore isn't about evolution. Spore is about being creative, building funny houses, designing space ships and giving them funny names, creating whole species of giant penises and hoping that you get away with it, giggling at the wacky monsters that you download from the centralized Sporepedia server, terraforming planets and turning their surfaces bright pink. It's not about the deep gameplay a lot of us was hoping for, it's not the revolution of Sim-games we expected. And when I stop taking myself, and my sense of self importance, too seriously I can understand and relate to all of that.

Perhaps giving the world the tools to create wild semi-pornographic content and spread it across the Internet is the greatest revolution in gaming in a long time. Perhaps that should be enough for me to accept that behind the simple facade that is Spore is hidden a stroke of genius.

Gamereactor UK
+
Never ending variety, impressive freedom of creativity
-
Lack of real depth
is our network score. What's yours? The network score is the average of every country's score

REVIEW. Written by Petter Mårtensson on the 27th of January 2009 at 04

Will Wright's massively ambitious take on evolution has finally arrived.

Spore DRM gets hate on Amazon 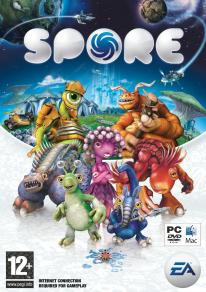