Obsidian Entertainment suffers from a somewhat tarnished reputation. Sure, they have a bunch of highly rated RPGs under their belt, but it's also a well known fact that you have be able to live with a large number of flaws and glitches in order to enjoy them. Fallout: New Vegas has a long list of well documented and bizarre glitches. Dedicated fans worked long and hard to patch and mod Knights of the Old Republic II into something that better delivers the great story, and Alpha Protocol was a mess of things gone wrong.

There is an old joke about it, that Obsidian writes all their RPGs in heaven, while they handle quality assurance on all their role-playing games in hell.

But South Park: The Stick of Truth isn't your typical Obsidian RPG. As THQ went under and Ubisoft assumed publishing responsibilities for the game, it was less than three months until the proposed release date. It's been another year and this additional time in development has clearly helped as The Stick of Truth comes across as solid, polished and entertaining. Perhaps Obsidian simply haven't had the right publisher until now...

You are "the new kid", who just moved into South Park, and you're tasked with making some friends by your father. The first of the cast you run into is Butters Stotch, dressed up in a Paladin suit as he is getting beat up by another kid with a plastic pipe. Soon you find yourself taking part in a large-scale live role-playing game that many of the town's children partake in. Cartman is The Wizard King, the beloved (according to Cartman) ruler of the Kingdom of Kupa Keep (note the initials). This kingdom find itself embroiled in a war with the Elves over The Stick of Truth - a stick that apparently grants its owner power over the universe. Before you know it the stick gets stolen, and you're sent on a quest to bring it back.

The Stick of Truth takes the piss out of all the RPG clichés, with classes like Warrior, Thief, Wizard and Jew, magic means farts, weapons are wooden, there's ridiculous costumes and much more. But beneath the silly jokes and parody hides a system that is both entertaining and well crafted.

It's cut from a template inspired by classic Final Fantasy games from the SNES era, with turn-based battles that take place in their own little battle scene, rather than the over-world where you and your companions (Butters being the first one, but your group grows as the adventure progresses) travel. You dispatch enemies with a mixture of standard attacks, special abilities and spells. We played as a thief, capable of backstabs, stealing or calling on four ninjas to deal extra damage. Butters can heal, throw his hammer or send lightning through it, while Princess Kenny can flatten a number of enemies with a giant unicorn (that pierces and kills him if you do not press the corresponding button sequence correctly).

The combat system differs from its source material by adding an active element. A faint flash and an audio cue tells you when to press certain buttons in order to deal more damage or vary your attack, as well as manually block enemy attacks with timing to avoid some - but not all - of the damage. It's simple, but it is also extremely effective and makes for a more engaging experience than just waiting your turn.

A nice touch is that many of the encounters can be avoided altogether, or at least be made much easier if you pay attention to the surroundings. You can often shoot or push things so they fall on your enemies, sending electricity through water puddles or farting in the general direction of a flame to thin out their numbers. It adds a nice puzzle element to the exploration.

Naturally you come across new gear, all with various stats and bonuses, and this can be upgraded with "patches" to boost them. The selection is nowhere near what you'll find in the likes of Diablo, but there are lots of decisions to make. Will you give up some defence in order to deal extra damage to the Nazi Zombies? Should you go for fire damage or ice damage? It's decisions you've probably been forced to make in dozens of RPGs, so in this regard South Park is hardly original. But it's still a well-crafted, distilled take on the hallmarks of the genre.

If you haven't seen many trailers for the game, you may still be stuck on the Nazi Zombies reference in the last paragraph. The story of The Stick of Truth starts out innocently enough, but soon you'll be treated to unexpected twists and turns that involve aliens, anal probes, zombies, abortion clinics, conspiracies and cover-ups, Taco Bell and much more. It's fittingly bizarre, much of it is completely tasteless, but it's also fairly entertaining. If you're not a fan of the TV show, then this won't convert you, but for those of us who are fans, The Stick of Truth succeeds in delivering an experience equal to many of the good shows we've seen over the years. Just not the best ones.

In addition to the main story there are naturally a host of side quests that include finding Mr. Hankey's (the Christmas poo) long lost son, clearing a basement of mutant rats (a nod to Baldur's Gate), collecting Chinpokomon figures, clearing City Wok of Mongolian invaders, and helping Al Gore hunt down ManBearPig. Some of it is original, some of it feels like filler material, and in the case of Al Gore it's a cheap rerun of a really old joke that feels well past its sell by date.

Most of the effort has naturally been spent on the main story, that in a formidable way manages to tie one tasteless thing together with the next. There is also a hint of Metroidvania to be found as you often see chests, bags and other tempting loot containers in places you cannot reach until you've found a certain ability.

The town of South Park itself is relatively large, it's easy to overview and you'll soon learn to rely on the fast travel system (Timmy!). Add to this the surrounding forest where you can easily get lost, and a couple of detours to other places, such as a hilarious short visit to Canada.

The length of the adventure will disappoint some - it took us around 12 hours to play through the game, but having spoken to colleagues who spent more time on side quests, it could conceivably last 16-18 hours. There are several areas of the game we haven't explored fully, like the forest, the church and the world of the Crab people, but along the way we were thoroughly entertained.

If there is any reason to criticise South Park: The Stick of Truth, it's for playing it a bit safe. This doesn't sound like a game where the publisher voluntarily cut out scenes featuring anal probing and abortions from the console version (both are included in the PC edition, and we cannot fathom why they were seen as too controversial for console), but it appears as if the game is going after shocks and poop jokes ahead of the more serious current day issues that have kept South Park a long-running success. It's perfectly shown in the aforementioned Al Gore side quest. The ManBearPig episode is almost 8 years old, it was ridiculous, felt irrelevant and rubbed us the wrong way. It's not the only joke from the series that is shamelessly recycled, and you cannot help but miss the bite from episodes like Cartoon Wars or Go God Go, or the pure insanity of Imaginationland. Reportedly South Park creators Trey Parker and Matt Stone have written most of the script, but that's no excuse. We have to make due with the entertainingly absurd and easily digested South Park, as opposed to the genius bits of South Park.

That's not to say The Stick of Truth disappoints. It's fun and entertaining, unusually polished for a game from Obsidian Entertainment, and beneath the simple surface and the fart jokes there's a surprisingly well functioning RPG. If you're in any way tempted by South Park: The Stick of Truth you don't need to worry. Just stick with the PC version.

Gamereactor UK
+
+ Lots of humour, Entertaining story, Great combat, Well crafted RPG elements, Polished.
-
- Some jokes are worn out, Could have been longer.
is our network score. What's yours? The network score is the average of every country's score 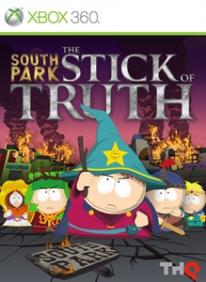