Have you ever dreamed of living in a steampunk version of Japan in the early 20th century, where members of all-female theatre revues also serve as covert robot pilots defending Tokyo against the evil demon hordes of the underworld? Of course, you have! At least that's the answer Sega's hoping to hear from you now that it's taking the Sakura Wars series to PlayStation 4.

Sega's Sakura Wars might be an unknown series for most gamers outside Japan unless they have encountered the characters through their guest appearances in the Project X Zone games on the 3DS. On the Japanese market, however, the games have sold over 4.5 million copies, and the lack of international releases is most likely due to the choice of its release platform. You see, the first game was released for Sega's own console, the Saturn in 1996, and though the Saturn was hardly a big seller in the West the console outsold the Nintendo 64 in Japan. Later, Sakura Wars carried on to the Dreamcast, before the fifth game became the first to get released internationally for PS2 and Wii. The last game sold less than expected, and Sega shifted its focus to a new and somewhat similar series, Valkyria Chronicles (which has received far more attention internationally). After fifteen years of dormancy, Sega is now returning to Sakura Wars with a soft reboot, hoping this will make it easier for an international audience to dive into the series without any prior knowledge.

As described earlier, the story takes place in an alternative steampunk world where both demons and combat mechs are a reality. Being a skilled mech pilot is not enough in this world, however. When not piloting giant death machines, the pilots are required to sing and dance as part of a theatre revue, which used to serve as a front for the combat operations in the earlier games. Ten years before the game's story begins, all the world's combat revues at the time (i.e. the heroes of the earlier games) gathered for one final blow against the demon realm, but nobody's heard from them since. Jump ahead to the year 1940, and a new generation of revue artists have entered the stage. You assume the role of Seijuro Kamiyama, newly appointed captain of the Imperial Combat Revue's Flower Division. The combat revue and its theatre building have seen better days and are now merely a shadow of its former greatness. Kamiyama must rise to the challenge and ensure the combat revue's survival in a new and modern age.

The story and setting sound a little weird, but it doesn't take long before it all starts growing on you, making you realize that the combination of steampunk, kimonos and Power Rangers-posing pilots works better than imagined. The game has several charming moments and personalities to offer. The alternative steampunk setting is both cool and consistent and even though the cast is somewhat mixed they mostly work well enough for the game to land on its feet. We are not looking at any exceptional innovations or a revolutionising story here - the latter's rather predictable, in fact - but there are enough pros here to invest the twenty-something hours needed to play through the story.

One of the quality factors of the game is its graphics engine, which is a developed version of Sega's Hedgehog Engine 2. The result is a game presenting the series' anime aesthetics in a beautiful and polished way, well adjusted to the current console generation. Both movements and animation are sharper than expected from this kind of game, and we can only hope that Sega continues to develop and use this engine for future projects. The game also offers some quality tunes from none other than Kohei Tanaka, most known for his work on One Piece and games like Gravity Rush. Being the original composer for the series, Tanaka proves he has no problem going back to old projects to breathe new life into them. Add some good voice acting to the mix, and this game gives off a good first impression. It should be mentioned that the game only offers Japanese voice acting, so players who are not comfortable with this might consider this a deal-breaker.

Sakura Wars has always been known for mixing several genres, and the first game combined visual novels and dating sims with turn-based strategy, the latter strongly influenced by Nintendo's Fire Emblem series (ironically, the latest Fire Emblem entry seems to have been similarly influenced by Sakura Wars' dating sim elements). The genre mix continues in this game as well, but with certain changes (more on that later). You will spend most of your time in the theatre and wandering around in the neighbourhood of Ginza, chatting with the revue members, solve minor and major tasks and play the traditional Japanese card game Hanafuda (if you have seen Mamoru Hosoda's eminent Summer Wars, you might be familiar with this game). Dialogue sequences come with multiple choices reminiscent of Telltale's games, where your choices will affect your relationship with the different characters, both professionally and romantically.

These dialogue situations are some of the more mixed parts of the game, revealing some of its weaker aspects. Dating sims can offer the player a good time, sure, but if the script falters it can lead to some embarrassing and even creepy situations. Sakura Wars keeps it mostly clean, but many situations still leave you with a sense of the game trying to lure you into doing something that's not okay. The game offers too many "sneak a peek in the bath" and "pat the girl on the head in a patronizing way" moments, and playing as the female characters' captain doesn't improve the situation. We saw some of the same tendencies in last year's Fire Emblem: Three Houses with the whole teacher/student power dynamic, but Sakura Wars still comes off as worse. We can only hope that Japanese game developers one day get some serious lessons in asymmetric power relations and how these generally create a bad basis for a dating sim, something which would result in better games all together.

When you're not wandering around the theatre or conversing with the other characters, it's time to jump into your mech and fight demons. Or, rather, enemy robots spawned by demonic magic, as is a tradition for the series. Previous Sakura Wars games offered turn-based strategy, but this time the developers have replaced this with real-time hack-and-slash action. You'll bring two underlings into battle to fight off scores of enemies waiting to get chopped down, which you can do by using regular attacks, slower and heavier strikes or ultimate moves, once the bar for the latter has been filled up.

It's not hard to see the inspiration from the Dynasty Warriors games and their various spin-offs, and the change could have worked out fine. The problem is the execution, which is without any form of depth, progress or challenge. There are no unlockable combos, attacks or weapons along the way, and the combat system boils down to monotonous and meaningless button mashing. Lockable aim helps you keep track in the chaos, but the fun is still lacking thanks to so much missed potential.

To summarise, Sakura Wars serves as a nice entry point to the traditional series and there's more than enough fun to find here for those who are curious about the concept. Ironically, the revue members spend a lot of time talking about how they don't live up to the fame and greatness of their forerunners, a point that veteran players can somewhat agree on as well. This won't be the case for most international players, however, and Sakura Wars shows that its genre mix can certainly work. Unfortunately, the game doesn't always deliver. Several embarrassing moments could've been avoided if the script was better and sharper, and the combat system offers surprisingly little depth or challenge. Still, many things in Sakura Wars works fine, and there are several positive moments to find here thanks to a nice audio-visual presentation and charm. Let's hope the game sells well enough to give us a remastered bundle with the previous games soon.

"The story and setting sound a little weird, but it doesn't take long before it all starts growing on you".

We also get a new trailer to mark the Tokyo Game Show, giving us an overview of the genre mashup. 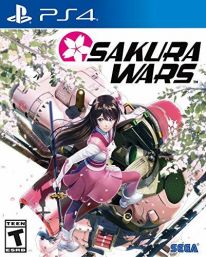