It can indicate fun, not greatness; enjoyment that is flawed on some level. It comes to mind when playing Sacred 3, the new action-RPG from Keen Games, who replaces original creators Ascaron for this entry. It's a game in the vein of Diablo, a simpler take on monster slaughter and character class customisation that certainly qualifies as entertaining, even if the dialogue is laughable, and not in that uplifting way, where the best scripts can raise a smile even as they wallow in cliché. This one will make you gasp for air as you struggle to stay afloat in a sea of cheese.

The country our four more or less muscle-bound heroes are fighting for is called Ancaria, whose emperor chose to ally with demons with aspirations of getting their hands on a legendary artefact with the power to destroy worlds. So we're out to do everything in our power to make sure he doesn't get his way and save our homeland. Not surprisingly, the story told is a somewhat bland one. At least the cutscenes are beautiful, almost by way of an apology.

Entertainment therefore comes in the senseless killing of every beast and creature we come up against. You come face-to-face (or weapon-to-flesh) with every trope of every fantasy world, from Orcs that have seemingly got a part-time gig to jump over from the Warhammer universe, to zombies with incontinence. You'll be killing your way through desert cities, lush forests and shimmering ice caves. The franchise's previous open worlds have been replaced with more traditional chapters. It makes the game more polished and streamlined, but it does make for an experience that veers even closer to Diablo.

Unfortunately challenge comes from the number of enemies that attack rather than from variation. Even the game's bosses follow the same recipe, growing more difficult due to increased health rather than offering some new attack patterns. A few do stand out due to the puzzles that need to be solved while the battle rages, but they are few and far between.

Even if you're playing alone, you'll have three NPC allies following in your footsteps. Sadly they're as inefficient as you'd think. But with four playable characters comes the opportunity for four player co-op, though it's only possible to play two-player locally, and the game really only comes into its own when four human players adventure together. Partly because, as with watching any B-tier movie, listening to woeful dialogue is all the better when you're doing so in company. But mostly because of the quick match-making system means barely any time staring at menu screens. Sacred 3 works great for a quick dip in and out session.

There's a focus on collaboration between allies that makes the multiplayer the real hook of the game, with character abilities balanced so they gel well together, so even if there's a lack of depth the game continues to feel fluid and dynamic.

But the flipside is that the simplicity of the game's combat is heavily pronounced. There's little depth in the fighting, while the upgrade system is tiresome and its rewards meaningless. As long as you play this in short, focused sessions, the game still works as a piece of throwaway entertainment. See it as a more arcade-orientated take on Diablo, and treat it as such, and you'll enjoy your time.

Advertisements
Gamereactor UK
+
Entertaining, awful dialogue funny when with friends
-
not in-depth enough, enemies lack substance
is our network score. What's yours? The network score is the average of every country's score

REVIEW. Written by Johannes Leander on the 7th of August 2014 at 13

The phrase ‘a good laugh' suggests a few things.

New trailer and screens from Sacred 3

Due out in a fortnight.

Keen Games' hack n' slash is due out this summer.

Sacred 3 due out this summer

Citadel and Sacred 3 at Gamescom.

PREVIEW. Written by Lorenzo Mosna on the 5th of September 2012 at 10

Offline
Scorp on the 7th of August 2014 at 17:40.
alot of negativity coming from steam users who bought this game. 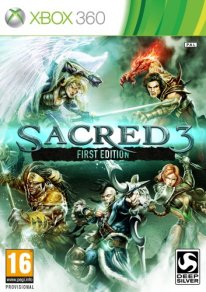