It's as much a tech demo for the console's graphical capabilities as Killzone: Shadow Fall and is deeper than the simplistic 2D nature of its gameplay would have you believe. It's rare to find a game that demands you puzzle out its deeply-rooted systems for yourself rather than bundle everything in an opening All You Need To Know tutorial.

Initially, it's Shooter 101. You pick one of a trio of ships, shoot your way through five stages, racking up points and climbing leader boards. Each stage has multiple phases, each rammed with multiple enemy waves, and concluding with a final boss. You've got your standard (upgradable) weapon, a limited supply of level-levelling bombs, a short-term boost, and a gradually charged one-off super-attack.

Shoot, destroy, survive. You'll do a lot of the first, some of the second, little of the last. Vast enemy numbers and a chaotic game screen will see to that.

From the off, you appreciate the stage design. Each level's a circular cylinder wrapping back on itself, foreground becoming background as you circle around. You go left, you go right. So do enemies. You can shoot forward, back. Ships and weapon fire are bold, glowing colours, standing out against the colder tones of the stage and its background. Destroyed craft fracture into particles, downed bosses explode into a cylinder-filling storm of fragments. What slow-down there is is consciously created, for effect only.

Once you've gained enough skill to dance rather than crash through attacks, you've breathing room to suss out mechanics. The multiplier - core component to longevity in today's shooters - stacks with each enemy downed, and resets if you haven't destroyed anything in a few seconds. There's a ceiling limit to the multiplier, and that limit is different for each difficulty setting.

Boosts turn your craft into an invincible battering ram, and chaining attacks on enemy craft not only speeds up your ship - and lets you get from one side of the stage to the other quicker - but stacks the multiplier faster.

So you start trying to decipher the other elements of gameplay, namely the trapped humans that are caged in glass prisons around each level. There's ten in all. Rescuing them isn't essential to survival, but they add nicely to the end of level score. Working out the how and when is slowly revealed as you learn to look out for the ever-so-subtle signposts.

You'll have a chance to rescue each prisoner in turn, the ten attempts spread not exactly evenly across the phases of each level, and there's two stages to the task. Firstly, you've to break them out of their cube, and you've a short space of time to do else they perish. This can involve, for example, downing specifically marked enemies, either all or in a specific order.

Do so and the human's freed and runs blindly around the floor of the level, only waiting for one of the stage's many dangers to end their escape plan.

It only takes one stray bullet to kill them, or a gap in the stage's floor for them to fall to their death, or be kidnapped by enemy ships. They've all the survival traits of Lemmings. You've to pick them up and deposit them into one of two portals stationed around the level.
You can toss them with a button tap, or even air-juggle them with your lasers.

It's about this point, when you've grasped the different aspects of the game, that you start discovering the added permutations to racking up your score. Truth be told, we're still trying to learn them all ourselves. The PS4's Share feature will be as much used to study the screen for solutions and tips as it will to bask in the glory of boss explosions.

That you have to accept there's a lot to learn doesn't make it as accessible as other titles in the genre. But that's not to say the title's uninviting. It's easy to be pulled in by the visuals, while the massive difference in the leaderboard scores between you and friends warrants further investigation and exploration to discover the game's proper flow. Something we've hit ourselves several times, and the suggestion is that this will be as intoxicating as some of the best in the genre.

A few niggles do exist. Placement of your ship's boost and Overdrive bars, each as half-circles around your craft, mean the important info is exactly where your eye needs to be, but the colours are much too muted to be obvious - and the audio cue to indicate a fully-recharged boost is too easily lost within the symphony of destruction that's firing out of your speakers. Similarly, spotting which human cage has been unlocked is nearly impossible, as it and the vertical green line indicator that appears to point out the captive's location on the level is also lost within the tapestry of ships, bullets and explosions.

Even with these issues though, this is still one of the strongest titles of the PS4 launch lineup, whether you're playing to take a break from other gaming sessions, or dedicating an entire evening to punch past friends' scores in the leaderboards.

Gamereactor UK
+
Hard, game mechanics take time to learn, music is great, cool enemy design
-
boost bar's levels are hard to spot, human escapees get lost in the chaos
is our network score. What's yours? The network score is the average of every country's score

REVIEW. Written by Gillen McAllister on the 27th of November 2013 at 17

"Gorgeous and complex, Housemarque's PS4 launch shooter is a joy to behold."

Housemarque has announced its working on a new game, in collaboration with the creator of Defender and Robotron. The collaboration comes through a discussion between...

Resogun gets a free update today, Defenders DLC next week

Resogun officially made official on PS Vita and PS3

The impossible made possible. 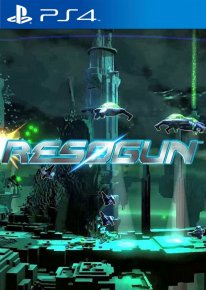