Since the start of this console generation we've seen a steady stream of old favourites making a comeback in remastered form with the likes of The Elder Scrolls V: Skyrim, The Last of Us, and Grand Theft Auto V all hitting our more modern consoles, and now we've got another in the form of Red Faction: Guerrilla, which made its debut in 2009 can you believe.

When Nordic Games bought the rights to a load of THQ titles and changed their name to THQ Nordic, the publisher initially went about remastering Darksiders and called it the Warmastered edition, which means that these guys probably like their puns. Proving the point, this new game is now called Red Faction Guerrilla Re-Mars-tered; an even more tortured pun.

If you can't guess from the words 'Red' and 'Mars' being in the title, the game is set on Saturn. Only kidding, it's Mars. Back in 2009, the game received generally favourable reviews, but the same bugbears have followed through, since the Re-Mars-tered edition is basically exactly the same third-person action title, just with upgraded graphics. If you own the PC copy on Steam, then you will get this version as a freebie, but console owners won't be so lucky.

If you didn't get the chance to play it the first time around, then it goes a little something like this: the story is pretty weak, but it follows a man called Alec Mason who at the start of the game vows that he will never be a terrorist/freedom fighter (depending on which side of the war fence you're on). He just wants to be a demolition expert to earn his crust and rejects his brother's call to arms, but five minutes later he's a full-blown terrorist thanks to the death of the aforementioned brother at the hands of the EDF.

Not to be confused with Electricite de France, this EDF stands for the Earth Defence Force, and rather than a supplier of energy, they have become an aggressive occupying force that is suppressing the good people of Mars. This series was never about its story, though, and the emphasis was always on fun.

Pretty much everything you see that has been built can be destroyed, and we mean everything. You have a range of weapons in your arsenal such as rocket launchers, mines, and hammers, and you can use them smash the living hell out of any and all EDF structures. In the style of Rambo, you become a one-man army, planting and detonating explosives, all the while gunning down troopers left, right, and centre. Don't spend too much time trying to tactically take out the troops before moving in though, because a lot of them just seem to be infinitely respawning - instead, focus on the booms and bangs of being a demolition man.

Remember the maxim: cool guys don't look at explosions, they just walk away (ok it's a song by The Lonely Island). There's nothing quite as satisfying as planting a boatload of charges, walking away and pressing the detonate button. If you put the explosives in the right place, the buildings will crumble, and it's really satisfying to watch. As we've said before you can blow up pretty much anything, from huge bridges to towers and wind farms.

You can even throw explosives onto people and see them fly high into the sky like a rag doll in an unrealistic, but totally amusing and entertaining, fashion. Maybe it's the Martian atmosphere that means that they don't blow into pieces, who knows. The solo army routine gets an upgrade when you find something that looks like the power loader from Alien, and it seems purpose-built for throwing both cars and people high into the sky, as well as ploughing your way through buildings.

Graphically speaking, it's lush and the in-game sections look amazing. It's even able to run in 4K if you have a PlayStation Pro. The only time that you can see that it's a remastered PS3 title is during the story sections, with the recordings looking a little dated now. Then again, this about fun and bangs, not story.

Aside from the main narrative, there is a multiplayer mode with several options to play online (we'll update you here if there are any issues on this front; at the time of writing we were unable to check). There is also wrecking crew, which takes all the fun from the main story and puts it into one mode. You basically have to destroy various structures in the time allowed, and it's probably the most fun you'll have playing the game.

So why is that the best feature? In the main story, the driving seems to feel a bit floaty as you're tearing around, and you don't fully feel like your wheels are on the ground or your totally in control. You also have a wide range of weapons at your disposal, and when all else fails you can use a hammer, however, the shooting doesn't seem to have aged all that well and sometimes it can be hard to hit the endless waves of enemies. On top of that, it can get a little repetitive when all you're doing is heading out, blowing stuff up, rinse and repeat (especially when the EDF is always there in record time, spoiling for a fight).

If you're looking for something with an emphasis on story, then it's probably best that you don't visit Mars. For those who do make the trip, however, what they'll find there is hardcore explosive fun that you can pick up and play whenever you feel like blowing stuff up. With Darksiders III announced after "warmastering" the originals, we can only hope that THQ Nordic plans to follow suit and make a true sequel to Guerrilla. We didn't enjoy Armageddon as much, probably because too much emphasis was put on the story and very little on the booms and bangs so here's hoping that if we're ever to return to the red planet, the emphasis will once again be on blowing things up. Why? Because explosions are fun, and Red Faction is at its best with its all about the explosions.

Gamereactor UK
+
Explosions galore; Great graphics, especially in 4K; Destructive fun.
-
Red everywhere; Floaty driving and gunplay; Not the best story.
is our network score. What's yours? The network score is the average of every country's score 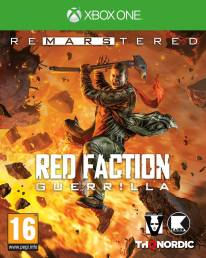