Back in the day the gaming world was full of clones. Every successful concept was copied, literary copied, and published under a different name. Most of the time they were much worse than the originals. These days clones aren't as common. The gaming industry is to big, and well documented. It still happens every once in a while, such as when developers tried to jump on the Halo bandwagon with things like Pariah and Breed (do you even remember them?), but its a very rare thing with the bigger publishers.

That's why it's surprising to see Tecmo Koei release Quantum Theory, an obvious clone of Epic's Gears of War, and it's almost as if I can hear Epic's lawyers typing their legal documents. In a near future the remains of mankind live in a ruined cityscape, where enormous living towers have shot up out of the ground. Demon worms come flying out of the towers and turned people into zombies of sort. All the zombies are big, bulky and grey, and so is the main character who stomps around in a heavy plastic armour. Sounds familiar? Gears of War may not be overly original, but this is ridiculous.

From a gameplay perspective things are even more clones, but lacking all finesse. The main character Syd moves exactly like Marcus, with the same bull rushing, and evading rolls. He dives into cover in the same manner, he shoots blindly like Marcus, the camera follows him like a documentary camera when he rushes, and he even changes his weapons like Marcus. The only things they haven't copied is the smart reloading mechanism. It's extra slow instead. You are also locked to the cover until you press the A-button to get out. So if you happen to run into a wall you risk getting stuck while the enemy shoots at you.

But even if Tecmo Koei have managed to copy the most obvious components of Gears of War they have missed what makes Epic series great. The level design is brutally awful, with cramped spaces, randomly placed obstacles where enemies spawn until the games says it's enough. Then the road is opened as a gate is open or a truck sinks into the mud and a door is revealed. It's so hysterical that I find myself laughing at it, but that's the only fun I'm getting out of the experience. The developers bragged about dynamic environments, and sure enough, it happens that things get destroyed and new passages open up, but when the gameplay is so boring it just gets me more annoyed.

The enemies are incredibly stupid, and stand on the spot and shoot or peak out behind cover and shot. And the times when you are aided by a companion they are just as stupid, and you always end up having to do the job yourself. To that end you have an arsenal of weak and tired weapons. The camera is claustrophobically closely glued to Syd's shoulder, and this becomes a big problem when you get up close and personal to the enemies and you try to take them out with melee attacks. To top it all off, Syd cannot keep his mouth shut and fires of clichés worthy of a Sylvester Stallone impersonator.

If you happen to endure this for a few hours you will come across a barely dressed lady who tags along. Apart from showcasing artificial stupidity she can be used as a projectile, where you launch her at enemies she then turns into minced meat.

From a graphical perspective Quantum Theory is the perfect example of Unreal Engine at its worse. Uneven lighting that shifts between washed out colours and pitch black, tons of shoddy normal mapping, and a horrible character design filled with steroid monsters. The animations are tacky, and despite a decent framerate the game comes across as choppy and imprecise.

Quantum Theory has been cooking for several years and was meant to be Tecmo Koei's ticket to reach western audiences. If there is any justice in the world, they will fail, because this is just horrible. I cannot understand how they could have worked on this for so long, and not manage to create something more playable. Playing Quantum Theory is just slightly more fun than getting shot in the back, but that is largely due to the option of turning it off. Quantum Theory sucks, and that's not a theory ladies and gentlemen, that's a fact.

REVIEW. Written by Mikael Sundberg (Gamereactor Sweden) on the 1st of November 2010 at 15

Tecmo Koei looks to challenge the third person steroid junkie genre with Quantum Theory, but do they have what it takes to dethrone Gears of War? 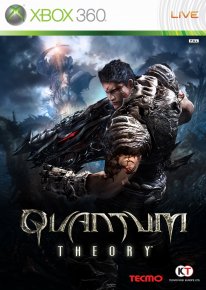