It's Plants Versus Zombies still, just turned from a 2D plain to a third-person one, and the plants are no longer rooted to one spot.

There may be noses turned up at the franchise extension, claims of a cynical money grab, but what you got here is a very fun title that exudes the stereotypical PopCap charm. But it's also a little limited in content, which is one of the game's main problems. PopCap have promised healthy post-launch support incorporating free DLC, the first of which will be available in the very near future. All fine and dandy - and hopefully will provide the title some legs in the months to come - but that's then. This is now.

Let's talk on-disc content. Both sides offer four character classes, with a handful of abilities each. The Plant Sunflower has a weaker attack, but can heal allies. The Zombie Scientist has a short-range shotgun but has a teleport ability. And so on.

These powers need to be unlocked through gaining XP and completing challenges first. You can also unlock additional perks for the abilities. There's a card-like collection system, letting you buy randomised booster packs through coins earned in-game (worry not - unlike PvZ 2, there's no real world money being asked outside the initial disc purchase), which give you character customisations, stickers that'll gradually unlock new character variants, and additional, NPC-controlled units for the game's various modes.

As for those, we've got three main types (that comes with 'Classic', upgrade-free variants). Garden Ops is the only one with a single player component, scaling the enemy numbers down or up depending if you take it on solo or with up to three friends. This is PopCap's take on the ever popular Horde mode and is closest to the pure PvZ experience, which has you defending a garden patch from an eleven-wave strong horde of zombies. Boss waves break things up, and there's a brief lull between each wave to rebuild defences.

Dotted around your defended area are pots for you to plant additional units, but you're limited to what plants you've earned through booster pack purchases, and there's no buy-in during matches. That mightn't seem entirely fair, but it works - you alter your strategy accordingly. Do you drop a sunflower that gifts health to get you easily through the initial waves, or rely on your team healer to keep you topped and deploy the flower come the latter, more insane stages?

Actually insane's probably overselling it. On normal difficulty you'll only have the occasional hairy moment, usually around boss waves, and when you need to finish with a dash to a randomised drop zone on the map which you need to stick in come the timer's countdown to escape successfully. Even the illusion of teamwork, and the right class balancing, is enough to overcome attacks.

Crank things up to Crazy difficulty though, and you've a different game on your hands. We tried it a couple of times and got stuck on the fifth wave, the boss fight. Overwhelming numbers simply overcame us. Level designs offer enough strategy though. Plenty of tight corners, overwatch points and alcoves to both threaten and aid defences.

That's true of the other maps on other modes. Team Vanquish pits 24 players against each other (a Classic version subtracts any unlocked upgrades for a more balanced clash) and the environments range from colourful neighbourhoods to garishly painted cemeteries. PopCap make a visual splash of knockouts, with a Gravestone Vs tracker popping up on screen and keeping count of who's conquered who, leading to match-long grudge matches.

As with any large-scale multiplayer game, it takes time to get settled into the visual lingo. Garden Warfare keeps things as bright and colourful as its source material so that time's as short as it can be, and there's amusement at the various plant voices that override the pops and bangs of seeds fired.

Gardens & Graveyards is the game's most substantial mode, that sees the Zombies trying to claim a series of gardens against defending Plants. As gardens are lost, Plants roll back to protect the next nearest location, and so on. While level design can make for some hotly contested gardens, you're aware of how long some games can stretch out for, and loose interest as a result.

And that's another issue. We played through the game at EA's offices at an all-day review event, some six hours plus change of game time. And even towards the end of that session interest to continue had tailed off considerably, the feeling being that we'd seen everything the game had offer. Sure, there's still new costumes to unlock, stickers to collect. But...

It's a much better game than you'd think. But given the on-disc content, and the swiftness of our unlocks, we can't help but feel this would have made a better case as a Xbox Live Arcade title rather than a (nearly) full-priced retail release. More modes, maps and unlocks would have keep us digging for more and bigger ability trees would have seen us continue to grind through levels to try new perks.

There's no doubt this is a solid multiplayer game, and hopefully the free DLC packs planned will give the title life into the rest of 2014 and beyond. It is definitely a more family-friendly, relaxed alternative to EA's other online behemoth, Titanfall. One that we sincerely hope continues to have a thriving multiplayer presence six months from now, and not weeded out due to a declining player base.

Advertisements
Gamereactor UK
+
Retains the PopCap humour, solid gameplay mechanics, Garden Ops fun with friends
-
Not a huge amount of content on disc and as result, pricing may be questionable
is our network score. What's yours? The network score is the average of every country's score

REVIEW. Written by Gillen McAllister on the 25th of February 2014 at 08

"It's a much better game than you'd think. But we can't help but feel this would have made a better case as a Xbox Live Arcade title rather than a (nearly) full-priced retail release."

EA release some interesting stats ahead of Garden Warfare 2.

Hitting all platforms, PlayStation owners also get access to Suburbination.

New map and new game mode among the additions. 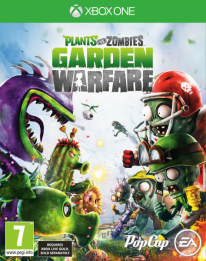