Cococucumber's sci-fi platform adventure Planet of the Eyes originally launched on PC back in 2015, and was also a finalist for "Best Indie Game" at the Canadian Videogame Awards. If it slipped past you back then, you're in luck, because two years later the game is available to play on PlayStation 4 and Xbox One.

In Planet of the Eyes you play as a robot who survived a crash on an alien planet. Most of the crew are dead, but a few survivors have moved ahead, looking for a beacon without you. As you move through the visually pleasing 2D world, you stumble upon recorded tapes left by your creator, which keep the story going. In order to find your creator, prepare to run, jump and swim to survive, as your robot is unable to fight.

One of the first thing you'll notice about Planet of the Eyes is the sci-fi meets Cartoon Network art style, which is very colourful and definitely looks polished. As you progress through the alien world, the scenery regularly changes to connect to the storyline. Don't expect to be constantly marveling at Planet of the Eyes' visuals though. While they are consistently good-looking, they are also relatively uncomplicated. It allows for a very relaxing gaming experience, although we can imagine it might look a bit dull to some.

Calm and relaxing is the best way to characterise Planet of the Eyes' gameplay as well. Your journey is a mixture of light puzzles and evading a variety of hostile aliens, mostly resembling giant insects and arachnids. Moving and jumping feels smooth and the challenge lies mostly in figuring out how to move past objects and aliens blocking your way using switches, crates, or ledges. You will be required to use some of your platforming skills and speed, but at no point does the game become hectic or too much to handle. Respawns are infinite and abundant, while checkpoints are very generous, although the game is still somewhat challenging and has the variety to keep you moving on.

The game's background music can best be described as dark ambient. We think you'll like it if you're into melancholic tunes, but if you're not then it might not be up your alley. We found the music to be right up there with the quality of the visuals; looking at the little robot jumping around innocently, the soundtrack feels stronger and darker than the game itself at times, but it certainly adds to the atmosphere and overall feeling.

We did miss some of the things that make 2D platform games enjoyable, though. For instance, there are no collectibles in the game, such as stars or coins. This diminishes interaction with the game world, as we found ourselves looking for secret passages in the first stages of the game, before realising that without collectibles, there isn't much use for secret areas. Having a reason to experiment and explore off the beaten track could have added an extra layer of gameplay, but on the other hand, not having to collect and search for secrets does fit the game's relaxing pace.

Our second point of critique is that the story seems to head towards finding out more about the alien world and its inhabitants, but ultimately fails to deliver on that. You will pass some great-looking ruins in the background which could make for a great added layer to the story, but by the end, hardly anything is revealed about the ruins or the creatures on the world you're stranded on. Story-wise, Planet of the Eyes doesn't reach the same heights like similar games such as Limbo or Inside, both of which tell more emotional tales that stay with you for a while.

It could have offered more playtime as well. Because the game is actually quite enjoyable, we felt sorry it was already over after about an hour and a half. Considering the game's relatively steep pricing, that's certainly close to being too short. Even if you struggle to complete every obstacle or puzzle, which is unlikely, it's hard to imagine taking longer than two full hours to complete.

So is Planet of the Eyes a game you should consider? For fans of retro sci-fi visuals and those looking for a relaxing game with an easy pace, we would definitely say so. The game will be easily playable for people who are only casual gamers (or even non-gamers), making it very suitable for a lazy night with a friend or spouse. For more experienced gamers and those who like to play at a higher pace, Planet of the Eyes might be too slow and finish too quickly.

"Very suitable for a lazy night with a friend or spouse." 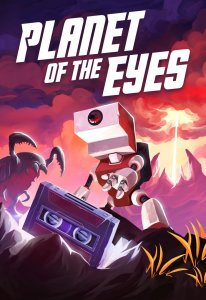