As a Peaky Blinders fan, a puzzle adventure game wouldn't exactly be my first pick for a title based on the show, but that's precisely what Peaky Blinders: Mastermind proposes. More importantly, though, it works, presenting an environment faithful to the show coupled with nice level design and a very interesting time manipulation mechanic.

Peaky Blinders: Mastermind is based on an original plot, which takes place shortly before the start of the first season. A Peaky Blinder (who is never mentioned in the series) is said to have murdered a member of the Chinese community, which could lead to a war between the two factions. It is up to the player, while controlling every member of the Shelby family, to find out what really happened and prevent the conflict.

The story is mainly presented between missions, through still illustrations and blocks of text. It's not exactly a cinematic experience, and the fact that it doesn't include voices doesn't help, but it gets the job done. Conversations are also very straightforward, so you won't be wasting too much time reading, and the images resemble the actors from the series, as well as the game models.

As mentioned above, Peaky Blinders: Mastermind is a puzzle game, played via an isometric perspective. The player will always have several goals to accomplish in each mission while working against the clock, but the fact that it includes time manipulation means that a four-minute mission can actually last much longer. Mastermind is also a game with little violence, which is somewhat curious considering the source material, but that doesn't really detract from the game at all.

The characters available are determined by the mission itself, but during the adventure, you will control Thomas, Arthur, Ada, Polly, John, and Finn, each with their own skill. Thomas can take control of some Small Heath citizens for a few seconds; Arthur can beat opponents and bust doors; Ada can distract enemies; Polly can bribe guards and open locks; Finn manages to sneak through holes and windows; John essentially does the same as Arthur.

The levels are then built around the skills of the available characters, and the player will have to use them together to advance. You will have to avoid guards, open doors, collect items, and find paths, and at the end of the mission, you will be rated Bronze, Silver, or Gold, depending on the amount of time it took you to finish. Each level also has hidden clocks that you can try to find.

Now, what makes Peaky Blinders: Mastermind really interesting is the mechanics of time manipulation. The idea is for the player to perform actions with a character, and then go back in time and take control of another family member, while the previous character automatically performs the actions recorded by the player. Let's imagine that you have to go through a guard and a door with its lever on the other side, while using with Thomas, Finn, and Ada.

It can be a bit confusing at first, but after getting the hang of it, it becomes quite intuitive and even fun to find ways to overcome the various obstacles presented by the game. And it's really fun to try and get the gold medals and the best possible time, which adds challenge and replay value to the game.

Peaky Blinders: Mastermind is a relatively short and straightforward game, but it's not particularly memorable and nor is it able to add anything relevant in terms of the general story of the saga, however, it is fun in the moment-to-moment. Peaky Blinders fans will enjoy themselves, yet Mastermind is recommended to anyone who enjoys a good puzzle game.

Advertisements
Gamereactor UK
+
Original plot that serves as a prequel. Nice level design. It's fun to repeat level to try and get the golden medals.
-
Narrative is presented by still illustrations with no voices. Kinda short and unmemorable.
is our network score. What's yours? The network score is the average of every country's score

The new tactics game based on the popular show is the focus of our livestreaming efforts today.

Futurlab's officially licensed video game based on the hit series Peaky Blinders is set to release this coming month.

The game, based on the popular series, has had a trailer released and will be an adventure and puzzle title. 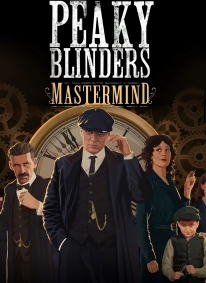