Overcooked was a real surprise when it launched in 2016. Developed by a team of just two, it was a quirky cooking simulator that packed plenty of tension and charm, and its simplistic controls made it perfect for playing in local co-op with friends. Ghost Town's follow up, predictably titled Overcooked 2, expands on the culinary carnage of the original adding a new multiplayer mode, new kitchens, and a ton of new recipes.

The Onion Kingdom once again is in danger. An army of reanimated bread known as "the unbread" poses a threat and only a team of skilled chefs can quench their relentless hunger. You and are your friends are that team and must travel across the many kitchens of the land, refining your cooking skills as you go in order to prepare for one final showdown. Yeah, it's the same nonsensical storytelling that drove the first game forward, but Overcooked 2 doesn't deliver its thrills with a deep narrative, instead, it offers some of the best local couch co-op in recent memory.

The core gameplay in Overcooked 2 is very much the same as the original. Working either alone or with up three others, you are tasked with preparing a stack of mounting orders at lightning speed. These requests start as simple as basic salads and soups and then progress to pizzas, burgers, and sushi, which all require multiple ingredients. Communication is key here and you'll have to coordinate your team of cooks to remain proactive and to focus on different tasks. Much of the fun here comes when things descend into chaos - something which is an inescapable reality in the world of Overcooked. You'll likely find yourself screaming at your friends as they accidentally send out the wrong order or set the kitchen ablaze due to their sheer incompetence.

This time around players also have the option to throw ingredients and many quirky stages have been implemented to build on and accentuate this mechanic. These levels see you passing ingredients between rafts and floating hot air balloons and it can become chaotic as it's often difficult to judge your aim. Beyond the typical ice, lava, and space levels from the original, Ghost Town has added more inspired motifs this time around. Our journey took us to mystical castles, creaky mine shafts, and floating kitchens that were propelled by hot air balloons. There are also kitchens that develop over time; one hot air balloon stage saw us preparing meals in the sky before it crashed into a fiery kitchen below - shaking up the map layout and ingredients.

Another addition to the sequel is the introduction of a few different chefs to play as and there's even a bonus DLC for those who pre-ordered and those who are playing on Switch. Among our favourites from the new additions are a cute mouse chef, a squid chef, and an old lady chef - although we wish that Ghost Town had given us the option to fully customise our culinary hero. This option would have let us truly distinguish ourselves from the many other players that we meet online.

Unlike its predecessor, Overcooked 2 features online multiplayer modes - allowing for private and public competitive and arcade modes. Playing online, chefs vote on kitchens from the story (similar to selecting tracks in Mario Kart 8) and both modes can be played with teams of one or two players. For those who don't have the luxury of a microphone, Ghost Town has added emotes as a method of non-verbal communication. Using these is as simple as pushing the triangle button and selecting from a wheel of options and it includes commands such as "washing up", "preparing", "serving", and "cooking". The story mode also fully available in online co-op which is something we have been clamouring for since the original's release.

Overcooked 2 has also seen visual refinements when compared to its predecessor, although it still stays true to its cartoonish look and top-down style. Kitchens now feel much more vibrant and detailed with more attention being given beyond your immediate workspace. Earlier on in our journey, we played in the aforementioned castle which was decorated with heaps of textbooks, spooky paintings, and had groups of wizards sat impatiently waiting for their meal. The overworld that separates stages also features touches like soaring birds and more varied terrain and there's a greater sense of verticality making traversal feel much less of a slog. Everything just feels much more polished and we appreciated the greater attention to detail Ghost Town has added this time around.

Despite a range of positive adjustments, a few curious changes have been made which disrupt the streamlined feel of the original. Chefs can now only be switched between in the main menu and you can no longer view a preview of a stage before having to commit. Overcooked 2's greatest flaw, however, is that it feels more like a bloated DLC than a new experience in itself. Everything from the original is present, albeit with a few extra toppings, but there isn't anything truly new. Perhaps a few different modes such as a competitive time attack would have helped make the experience feel a little fresher.

Serving up a second helping of chaotic multiplayer goodness, Overcooked 2 delivers as a worthy successor despite being made from the same ingredients. The online multiplayer, more varied stages, and much more detailed visuals allow for a more refined experience the second time around, although some may lose interest in feasting on the same dish twice; stages boil down to repeating the same repetitive tasks and there were some questionable choices made here and there that feel like a step back. We're sure fans of the original will love what Ghost Town has delivered here but we wouldn't go as far as recommending it to those who didn't fall in love with the original's unconventional charm.

Gamereactor UK
+
New mechanics, more detailed environments, new chefs, same brand of wholesome fun.
-
Not enough new features means it can get a bit repetitive.
is our network score. What's yours? The network score is the average of every country's score

"Serving up a second helping of chaotic multiplayer goodness, Overcooked 2 delivers as a worthy successor despite being made from the same ingredients."

October 1 will welcome a new Autumn update ahead of the title's release on next-gen tech.

Overcooked 2's latest seasonal DLC is out on all platforms

Overcooked 2 DLC Suns Out Buns Out is now available

Ghost Town Games and publisher Team17 have just dropped some delightful content, adding more fun to the realm of Overcooked 2 - for free.

The Gourmet Edition of Overcooked 2 is stuffed full of content

If you can't get enough of Ghost Town's brand of chaotic co-op, there's a feast for fans of local multiplayer.

We have two new chefs and some new kitchens to cause chaos in as part of the free content drop. 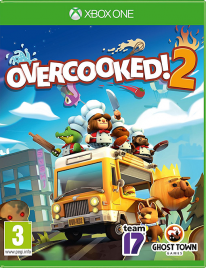 Lovers in a Dangerous Spacetime

Overcooked: All You Can Eat