Ninja Gaiden, like all good ninjas, came out of nowhere to surprise gamers back in 2004. Team Ninja crafted a fast-paced third-person adventure game that caught the imagination of Xbox owners. It proved so popular that it spawned a slew of re-releases and sequels. The first, Ninja Gaiden Black, was warmly received thanks to the improvements it made to the original's formula.

Ninja Gaiden Sigma, which is essentially the source material for Sigma Plus, was still welcomed by fans of the series when it was released on PS3, but many found it difficult to drum up the same enthusiasm for what was, in effect, a third version of the same game.

Sigma Plus takes that tally up to four, but the switch to the Vita's small screen brings with it unique challenges. Happily Team Ninja has, on the whole, done a good job with their port. Despite some minor adjustments, the graphics look crisp and polished, and the switch to the Vita's petite screen doesn't create any objectionable side-effects. On the whole the camera controls work, though from time to time switching between third and first person can get a bit jerky. It only becomes annoying when in combat in tight areas, but it doesn't happen frequently enough to be a major concern.

Much time has passed between Ninja Gaiden's original launch, and the release of Sigma Plus. Enough time for the level design to have aged noticeably. It's not a significant problem; the gameplay mechanics that sit inside the levels are still solid, it's just that other games have since bettered the structure that Ninja Gaiden presents, and that becomes difficult to ignore after a while. At times it feels tired and generic; a massive departure to how the game felt when played the first time around.

Not that it matters much, as level design isn't Ninja Gaiden's main attraction: Controlling Ryu is still an exciting and pulse-racing experience. As confidence grows, so does his repertoire of tricks. It doesn't take long before he's, once again, running along walls, jumping over his enemies and dodging deadly attacks. Controls quickly become intuitive, and dispatching foes is as satisfying as it is breathless.

Equipment can be traded and upgraded in the in-game store, and there's plenty of dead ninjas clutching handy weapons dotted around the various maps. It's not long before an arsenal is assembled that would make any ninja beam with pride. Mastering the various weapons takes a little longer, but there is enough variety to make specialisation a worthwhile effort. Using the bow and Ninpo magic allows advantage to be taken of the Vita's touch capabilities. However, this feels like what it is; a bolted on feature to take advantage of some new hardware. Switching from analogue stick to tapping the screen/touchpad can be distracting, and I'm not sure that these new functions are in keeping with the hardcore ethos of the rest of the game.

Progressing through the campaign takes you primarily to the Vigoor Empire, as Ryu seeks revenge for the slaughter of his people at the hands of Doku. Each level provides plenty of enemies to dice into little pieces, but the basic premise for most is fetch and retrieval; go there and get a key and bring it back; go there and smash that and then come back. As previously mentioned, this is hardly cutting edge design.

There's a selection of Ninja Trials to test the skills of gamers. Ryu has to clear large amounts of enemies as quickly as possible to progress. Like the rest of the game, these trials present a decent challenge, and for those who want to squeeze as much play out of their game as possible, this mode will be a welcome addition.

To further increase variety, Sigma Plus also has you play certain parts of the campaign as Rachel, a scantily clad 'Fiend Hunter' who, with her incredibly large gravity-defying breasts, wouldn't look out of place in Team Ninja's other major IP - Dead or Alive. Rachel carries around an improbably large axe and provides an interesting alternative to playing as Ryu.

There's plenty of content to get stuck into, and there's an impressive amount of levels to explore. Each stage is punctuated with some sort of boss fight, be it ninja or demon. Most of these are pretty straightforward, albeit tricky, affairs that involve lots of dodging and plenty of sneaky, glancing blows. Mobile enemies mounted on horses and motorbikes also make for a stern test.

Stern is certainly an appropriate way to describe the challenge thrown down by Ninja Gaiden Sigma Plus. This game is rock solid, and will test your skill and determination in equal parts. Button bashing wont get you far, to survive you'll need to work out how string together complex moves and improvise on the fly. There's nothing wrong with a challenge, but it's a shame that the game's difficulty highlights its most significant flaw - save points.

For my money they just don't work. The PS Vita screams bite-size gaming, and the distance between the save points makes playing this way undesirable. A considerable chunk of time needs to be invested to get the best out of playing Ninja Gaiden. It's a game that requires complete focus, and if you've got ten minutes to waste while you sit on the bus, the time it takes to get your bearings, get involved with the story and find your killer edge might be too long for some gamers; it's just not conducive to gaming on the go.

Poorly distanced save points also make it incredibly frustrating to die in Ninja Gaiden. Sometimes, when the distance travelled from the last save isn't far, a death induced replay isn't too much bother, but when you've got to replay ten or fifteen minutes of game (sometimes with no health potions and always against capable opposition) it can border on infuriating, especially if you only picked it up to have that quick game whilst sat on the bus.

It's a small problem, but a significant one, as it reduces the overall accessibility of the title. If you've got time to sit down and get stuck in, it's all well and good, but snatching a quick game isn't ideal as, in the end, playing this way can create a disjointed experience. That said, the game itself is still good. It's challenging, it's exciting, it's brutal and violent, and if you haven't ever played it before, it's probably bordering on essential.

If you own a PS Vita and a slice of ninja action appeals, don't hesitate to buy this, because even after all these years, it still kicks ass. But, if you've already played Ninja Gaiden Sigma (or Black, or the original) then you might have trouble swallowing the hefty price tag (for what is essentially a slightly improved version of an eight year old game that you've already played). Equally, if you're looking for gaming on the go, there are definitely games better suited to delivering a quick fix already available for Sony's new handheld.

Gamereactor UK
+
+ Solid graphics + Challenging gameplay + Exciting combat + Loads of content
-
- Save points not suited to Vita - Not ideal for gaming on the go
is our network score. What's yours? The network score is the average of every country's score

"Team Ninja dust off the third iteration of Ryu Hayabusa's first adventure, and bring it to Sony's PlayStation Vita, in the guise of Ninja Gaiden Sigma Plus."

Win a PS Vita and games. 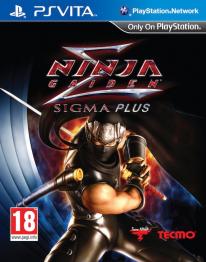