Aren't you sick and tired of teenage brats with spiky hair and giant swords? I'm a bit fed up with them to be frank. Therefore, it came as a breath of fresh air to get to know Nier, a middle-aged man whose sole goal in life is to find a cure for his daughter's illness.

He soon stumbles upon a magical book, Grimoire Weiss, and aside from being the key to defeating all that's evil it also serves as a sarcastic sidekick with delusions of grandeur and a rather fitting British accent. With the assistance of Weiss (Grimoire Weiss, if I may ask) Nier's sword wielding is enhanced by giant fists and magical beams. With time more side characters appear, but the quest remains focused on the single protagonist.

The game itself is an interesting hybrid of the intense action found in games like Devil May Cry and Bayonetta, and your typical modernised Japanese RPG such as Monster Hunter or Last Remnant. The combat, especially when faced with the magnificent bosses, smells of Dante from a far, time your attacks according to the pattern and target the weak point of the boss. But there are also plenty of opportunity to roam freely on open plains hunting for monsters and collect stuff villagers ask for.

Another way of looking at the game would be to imagine what a more conventional and commercial Shadow of the Colossus would have looked like. What if Team Ico had filled their game with cities, missions, filler enemies and side characters, instead of distilling it into something unique. Nier is that game. In particular, the visual design is very similar to Ueda's masterpiece, with rugged cliffs, ruins and bizarre monsters, but not quite as razor sharp. But using similar techniques that were impressive back in 2006 on Playstation 2, comes across as mediocre with today's standards. The game also comes with excessive loading times, but an optional install (on both formats) helps.

Even if the concept is conventional the game is teeming with small clever ideas. While you run around in three dimensional spaces for most of the time the game changes perspective in narrow passages where you see the action from the side like it was a platformer. Other times you get a top down view that reminds us of old Legend of Zelda titles. And both bosses and regular enemies have a tendency to emit shots in patterns that remind us of shooters like Ikaruga and Mushihimesama.

A big mix of ideas and inspiration, but with an identity of its own. The outstanding music is largely to blame for this. Virtually every piece of music, ranging from the quiet ballads of the towns to the more up tempo pop songs of the wilderness, help set the right mood for each given moment. It comes as a bit of a surprise that the music has been composed by the same individual who scored Tekken 6. A man of many musical tastes and talents apparently.

Unfortunately the rest of the soundscape is not as brilliant. Some of the voice actors are top notch. Nier is suitably harsh, and Grimoire Weiss is voiced by a wonderful Alan Rickman imitator - that always manages to sound annoyed and/or sarcastic. The angry half demon Kainé however, is on the opposite end of the spectrum, and constant cursing just doesn't seem natural in a translated game such as this.

The design is a bit all over the place, and Kainé looks like something that escaped from a fancy catwalk. But don't grow too fond of her until you have gotten to know her a bit better as you carries around a few dark secrets. The world of Nier is dark, a distant where mankind almost got extinct and reverted to a medieval society. But there is still technology around, ancient ruins of technological wonder guarded by mechanical monsters and the ever present Shades, gloomy, glowing shapes who like to hunt in packs.

Despite a bit of humour and the intense pace, Nier is a dark story, even if it's not completely pitch black. Things seldom turn out as intended, and Nier's ambition to put food on his table and find a cure, by running small errands or searching old and forgotten catacombs grabs my interest. Since there are always more missions to complete and more monsters to take out it's hard to stop playing. All along the adventure Nier grows stronger by finding magical phrases that enhance his weapon and richer by looting corpses and salvaging junk. If you truly don't mind boring yourself you can also try and catch fish or grow food, two mini-games that appear in most Japanese RPG's without ever being invited.

Cavia don't have a perfect record in the past, but the mention of them developing an action RPG got my attention. The game was made in two versions, where the main difference was the protagonist. The Japanese PS3 version got a Raiden-esque pretty boy, the brother of the girl we're meant to rescure, while westerners (and Japanese Xbox 360 owners) got the old barbarian father. This indicated that the main character wasn't that important and it seemed like a bad omen. But I was proven wrong and Nier is one of the best games to come out of Cavia.

I enjoy the freedom to do things in my own good time, and the main story isn't force down my throat. It is fun to get a mission that would appear way too hard, but that with a well chosen and cautious approach (such as running circles around a rock to avoid a pissed off giant boar) is doable as comes down not only stats but also the skills of the player. The humour, the great boss fights, the addictive nature of "just one more mission" and most of all the music are reason why you should take a closer look at Nier. There are flaws such as the low production values, and the repetitive cast of enemies, but the strengths of the game far outweigh these weaknesses. A very pleasant surprise.

Square Enix and Cavia deliver an action RPG that reminds us of Devil May Cry, The Legend of Zelda, Shadow of the Colossus and Ikaruga. Surely it has to rock!

Original Nier is being reprinted for Europe

With the success of Nier: Automata you're getting a chance to revisit its origins.

No news on Western release 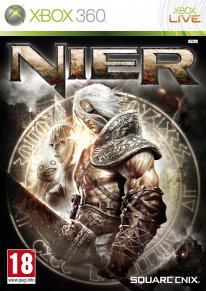