Nintendo has released a new batch of Super Mario 3D Land screens to coincide with its pre-TGS conference.

Note that the new screens suggest there'll 2.5D side-scrolling sections as well as the more open areas seen previously, and there's even a nod to Mario's platforming origins on the NES with the Castle from Super Mario Bros.

REVIEW. Written by Gillen McAllister on the 25th of November 2011 at 16

"Its a brilliant admission of Luigi's invisible presence at the franchise's beginnings; Nintendo just made a gameplay element out of it twenty-six years later."

Nintendo launch promotion ahead of holidays.

Fastselling Mario handheld in the US.

Video verdict on the plumber's return.

Get ready with a new set of teaser screens. 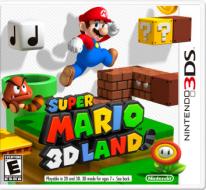