We sampled an early version of Might & Magic X: Legacy last year, and we found it wanting. Cumbersome gameplay, an overly complicated story and poor design choices turn the experience into a chore. Therefore it is with a slight bit of hesitation that we dive into the full version of the game.

Limbic Entertainment have managed to change a lot of the elements we felt were off with the early version. Now it does a better job immersing you, and the first bit of dialogue contains a few extra lines that hint at what the player should do next. It's carried out in a fairly elegant way and there is no need for flashing arrows to guide you on your way. In addition to this the difficulty settings have been adjusted and the rewards are greater, while the challenge remains the same.

Might & Magic X: Legacy is a worthy heir to the Might & Magic crown in several areas. It's a difficult game, something that is essential to the experience, and it lets you tinker with the characters down to the most minute detail. However, the backpack menu is the most uninteresting we've ever seen in a Might & Magic title to date. What's most important is that it feels like a Might & Magic game. We're not sure if it is thanks to the audio, or if it's the iconic turn-based gameplay that does the trick, but when things run smoothly it's easy to appreciate.

Unfortunately things often grind to a halt. Limbic Entertainment opted to go for the grid-based approach to movement, where you move one square at a time and turning also costs one movement. This means that even in large open areas it feels as if you're moving down a narrow corridor, and if you're out in the wilderness and someone loses consciousness or dies, it's a long and boring process of making your way back to the village. The Might & Magic series moved away from this model in the late 90's and it previously only existed due to technical limitations.

The most efficient way of playing Might & Magic X: Legacy in our view is to play it with a single hand using WASD for movement and the space bar to interact. The mouse is barely used other than searching through the backpack. We ended up playing the game leaning our head against the idle arm. Perhaps a telling picture of how immersed we felt in the experience.

There are also other annoyances. The introductory cinematic is still as needlessly long as we recalled from last time, and while we took in a few more details from watching it a second time, it still comes across as unnecessary fuss. Much of the information that has been squeezed into the movie could have been told much more organically through in-game dialogue. The most important and interesting part of the intro, the bit that deals with the group of adventurers the player controls, feels like an afterthought. There's too much going on, and instead of enlighting the player it just ends up in confusion.

The visuals and the audio are the best parts of the Might & Magic X: Legacy experience. The old-school design is easy to appreciate and the landscape is littered with altars, ruins, chests and other things to trip over. In the second quest of the the main storyline you're tasked with climbing a lighthouse that gives you a fantastic view of the region - a very nice surprise. The audio side of things almost makes up for the shortcomings of the rest of the game and the situation-based lines the characters utter constantly made us smile.

One last little thing that annoyed us, is when when you're making a group. The characters are given names based on their gender, but if you change the gender later on, this isn't reflected in the automatically generated name. If you're not paying attention you could end up with some interesting combinations. Our group consisted of the harsh Raiderz who went on an adventure with the male crusader Caitlin and the beautiful witch Alan.

For those of us who grew up with Might & Magic there is a certain nostalgic charm to revisiting the old landmarks, but that charm quickly wears off. Much of what made the old games special is missing and it doesn't take long before we become painfully aware of the strings and mechanics that hold the game together.

"There is a certain nostalgic charm to revisiting the old landmarks, but that charm quickly wears off." 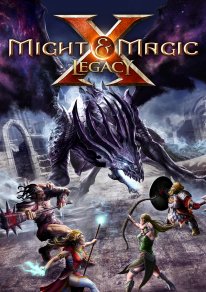 Warlock: Master of the Arcane