Sure, it's a smart duo. A nameless thief who joins up with a giant creature covered in moss. Anything can and should happen. Namco Bandai join the co-operative trend with Majin and the Forsaken Kingdom and the end result is a loveable adventure full of oil covered enemies and castle walls. And baby language.

The adventure starts with a rescue mission of the imprisoned Majin creature Teotl, giving you a powerful ally and some sort of enchanted wand to hit enemies with. Teotl is a happy fellow, and he gets happier when you feed him special berries. He names you Tepeu and the two of you shake hands/paw and start to explore the forsaken kingdom together.

This is where Game Republic's mix of action, exploration and puzzle solving kicks off. It's been called a Zelda for HD consoles and the oil covered enemies reminds me of the twilight creatures of The Legend of Zelda: Twilight Princess. These fellows are of course begging for a beatdown and you will swing your wand, Teotl his fist, and together you will launch powerful combo attacks that squash enemies equipped with shields and bows.

Many objectives in Majin and the Forsaken Kingdom require a co-operative effort and these vary from simple tasks like climbing up on Teotl's back to reach ledges, to advanced puzzles that require several steps such as flinging rocks or yourself with a catapult. The pace is naturally lower when you're solving these more complex puzzles, sometimes it feels a bit too slow, but for the most part the pace is perfectly balanced and relaxed.

Teotl is strong willed, but still does what you tell him to. By holding down a shoulder button and one of the face buttons you can give him different commands. He can follow you, stay put, howl, attack enemies or interact with the environment in various ways. Heavy castle doors and fragile walls can be opened and pulverised. Teotl can also stand next to a giant rock and wait for your command and then roll it over unsuspecting enemies.

As you progress and dish out combo-punishment you collect red crystals that strengthen the bond between you and the Majin. You also need to feed the hungry ogre with berries as these make him stronger in combat, and helps him develop fire and ice attacks. A friendship meter isn't exactly common in video games, and adds a nice touch to the game.

The concept of a stealthy human paired up with a powerful creature is great, but the main characters of Majin and the Forsaken Kingdom never really speak to me. Tepeu is very anonymous and no matter how well designed the Majin is, his slow-fitted baby language quickly gets on my nerves. "You almost dead! I fight now!" Constant exclamations of this nature will make you want to rip the moss off of your head. With that said the story grows towards the end and particularly Teotl's mysterious flashbacks adds a more adult darkness to the game.

I have the same kind of ambivalent feelings towards the graphics. One moment I'm admiring the design of the two dimensional cutscenes and Teotl's close ties to nature, the next I'm yawning at sterile castle environments and repetitive level design. Overall, it still feels like a nice break from visits to abandoned space stations.

With the negative stuff out of the way I would still recommend Majin and the Forsaken Kingdom, as it blends several elements in a solid way. To build your game design around the concept of friendship is not just a good idea, but refreshing in an industry where action, blood and explosions are what normally get.

To sum it all up I feel that Majin and the Forsaken Kingdom is an enjoyable and cosy action adventure that slots nicely into a rather large gap in the game libraries of Playstation 3 and Xbox 360. Now I'm hoping for a sequel with faster pace, more challenging co-operative puzzles and a more charismatic main character.

REVIEW. Written by Jonas Elfving (Gamereactor Sweden) on the 25th of November 2010 at 12

A thief and his monster go where the wild things are in this fantasy adventure from Namco Bandai. Find out whether the budding friendship between man and beast survives our review.

ARTICLE. Written by Lorenzo Mosna (Gamereactor Italy) on the 27th of October 2010 at 12

Take a look behind Majin

There is a big difference between standing on the shoulder of giants, and standing in the shadow of one. Majin and the Forsaken Kingdom manages to do both.

Steve caught up with Game Republic's Daisuke Uchiyama to talk about the inspiration for Majin and the Forsaken Kingdom and the relationship between the two main characters of the game.

We chat with Daisuke Uchiyama 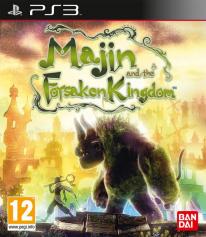