The moment the title screen pops up, you're hit by the sounds of Wolfmother's Joker and the Thief. If we're honest, we didn't expect it. However, it did put a massive smile on our face and reminded us we were about to have fun. And boy did we have fun.

Extrapolating from the title it's pretty obvious where things are headed. It's a Lego game that brings you all of your favourite DC super-villains, from nasties like Lex Luther, to the Joker, and Gorilla Grodd. There are even some lesser-known ones, such as King Shark, who might get a few players Googling their origin stories. Don't worry, though, as many of your lovable super-heroes like Green Lantern and Batman also make an appearance, and even become playable later on.

Story-wise, we were very impressed. Straight out of the comics comes the Justice Syndicate, also known as the CSA (Crime Syndicate of America). They come from a parallel version of Earth (Earth 3) and represent alternate evil versions of the Justice League, featuring Ultraman, Super Woman and Owl Man amongst others (representing Superman, Wonder Woman, and Batman respectively).

We're not going to ruin the story for you, but it's safe to say that our DC Villains decide to save the day by becoming a bigger bad than the CSA, helped by appearances from some of the iconic super-super villains. Our only qualm with the missions was that we spent maybe a few too many of them collecting new villains and getting the band back together.

Most of the story is told through Metropolis's most famous reporter, Lois Lane, along with her faithful cameraman Jimmy. The cutscenes with these two really do drive the story forward, with the dialogue well scripted and genuinely funny at times, linking the stages together pretty well. That's true even when some of the missions (like finding Black Adam in the museum) might have felt a little needless, were it not for the dialogue from Lex Luther being so spot on. This level felt more like an excuse to have a boss fight against Shazam and Mazhas (his Earth 3 version), but the quality of the script meant that the devs pulled it off.

That said, the missions, even while recruiting, took us to some amazing and familiar comic book locations such as STAR Labs and Dinosaur Island, each being beautifully designed and highly colourful. The Gorilla Grodd level takes you to a stunning jungle that's green and vivid and full of killer apes, while another level takes you to a ninja retreat in the mountains (no prizes for guessing who's there). Other stages you visit include an underwater level where you battle a giant squid, and Oa even makes an appearance.

On top of that, there are a fair few boss fights to get your teeth stuck into, as you battle superheroes like Beast Kid and even help some villains along the way. We even had the chance to aid Gorilla Grodd in defeating Solivar to take control of Gorilla City. The boss system is simple; avoid attacks until you get a chance to strike. Simple, yet fun!

Every single level is a boatload of brick-smashing fun. You know exactly what you're getting when you buy a Lego game - smash, build, and collect - and there are the usual variety of simple yet engaging puzzles, like rotating mazes. That said, while much is familiar, DC Super-Villains has the added element of a fully customisable main character, and we really liked this addition, as you can customise your look as well as your powers. For example, there's an adjustable laser beam that can be a variety of colours and originate from different places (like a weapon or from your eyes). Even though your new villain doesn't speak, it brings an element of personalisation to the game. Our guy had a dinosaur cape and a lizard's tail sword, and we're pretty sure you could come up with something better as long as you don't just press randomise.

Throughout the story, your character is known as Rookie, and somehow they become integral to the plot. Rookie manages to add several different super-powers to his repertoire of tricks, like an electric bolt and Poison Ivy's plant growing, which means that you spend less time swapping characters to do different tasks (and the ability to absorb new powers gets explained later on). During free play, you can always go back with your Rookie and a handful of others to complete the level too.

Lego games are synonymous with having to grind a little in order to 100% them. However, it felt easier this time to collect all the studs you need to attain true villain status. We liked this, as we managed to get it on most levels first time by destroying stuff, rather than ignoring it and doing it with a score multiplier on free play. There is still a trophy for 100% completion of the game, but it does look like it may be slightly less of a slog than it is in some Lego titles. After the main story, you can revisit all of the levels in free play with whatever character you want, and part and parcel of the value proposition is the ability to unlock all of the secrets.

Every character can perform different special actions. For example, Lex Luthor has a red laser beam from his eyes that can destroy gold blocks, and the Joker has remote control teeth. These character animations are really cool and make the experience much more charming. In fact, "charming" is exactly how we would label this, from start to finish. Between each of the gorgeously designed levels is the hub. This is one continuous open world area with so much to see and do. It really feels like a city to explore, and it feels alive with so many mini-figures wandering around. You can drive in the Batmobile or fly around as Superman visiting Smallville, Metropolis, and Gotham City, among other places.

Scattered across different locations on the hub map there are events such as races too. These are usually restricted to certain characters like speedsters or unlockable vehicles. Then again, is there anything better than Harley Quinn racing through a swamp on the back of an alligator trying to beat a time limit?

Lego titles are great fun for kids of all ages, which is why it also has a two-player split-screen mode, meaning that families can really get involved as well. While reviewing this, we spent a fair bit of time in co-op. While it was a lot of fun, we did see the odd glitch. We're hopeful a patch may sort this, or that it was a one-off. The only other qualm we had was that, with there being so many different villains here, some of them like the Penguin and the Riddler were only present for a very short amount of time and felt underused. That said, they can all be found in free play.

To sum up, then, Lego DC Super-Villains is a great-looking and sounding title. The soundtrack starts off with a bang and overall we thought that the music was a delight. There's plenty of fun to be had here, with loads to do as you while away the hours. The hub, in particular, is great to get lost in between missions. That said, it feels like some of the characters were underused and there was some we'd have liked to have seen more of. Once again TT Games has brought the fun, this time alongside a story that really hits the mark despite being a break from the norm.

Advertisements
Gamereactor UK
+
Charming and fun, Great story with an awesome hub, Character customisation works well.
-
Some of the best villains are underused, A couple of minor bugs.
is our network score. What's yours? The network score is the average of every country's score 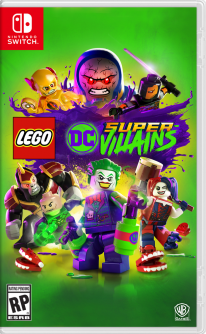